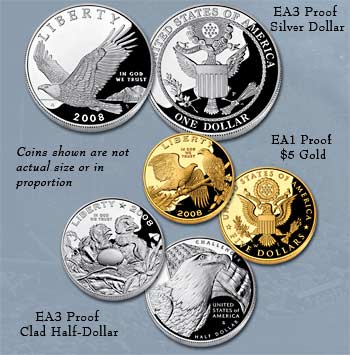 All three legal tender coins (gold, silver & clad) celebrate the successful recovery of the Bald Eagle to America’s skies and the upcoming 35th Anniversary of the Endangered Species Act on December 28.

“We’re grateful that so many patriots are stepping forward to support our nation’s living symbol of freedom,” said AEF President Al Cecere. “Every American should do their part to help keep this majestic bird thriving for generations to come.”

Surcharge monies generated from the sale of each coin are being set aside to create a permanent endowment fund benefiting the Bald Eagle’s future prosperity, which is managed by the eagle conservation group — based at Dolly Parton’s Dollywood park in Pigeon Forge, Tennessee.

If every coin in the special limited edition sells out by that deadline, over $10 million would be raised for the eagle preservation fund.

“This is an ideal time to diversify and buy gold and silver, since the stock market is so volatile,” says AEF President Al Cecere. “Traditionally, precious metals have been a relatively secure alternative investment.”

The clad coin features the stately image of the celebrity Bald Eagle Challenger), which is the first time in U.S. history that a famous eagle (or animal) and its name have been placed on a legal tender coin. The silver coin bears the original 1782 Great Seal of the United States, which has not previously appeared on any government issued coinage. The present Great Seal and two young eagles about to leave their nest appear on the Gold coin. The words “In God We Trust” are included on all three coins.

“With Christmas quickly approaching, these beautiful precious metal collectibles make wonderful gifts that will be valued forever,” said Cecere. “What better way to be bullish on America than to invest in the on-going care of such a precious national treasure.”

US Mint Bald Eagle Coin – A Commemorative Tribute to a National Treas...