This is the story of how an injured eagle from the Spokane, WA area was rescued, rehabilitated, released, and rescued again—before eventually finding a forever home at the American Eagle Foundation. The story begins in 2012, and was researched and documented by Crystal Slusher, AEF Educational Nest Cam Coordinator.

The story first appeared as a picture on Facebook, showing Robert Hutton rescuing an injured eagle on None Mile Falls Road in Spokane and first publicized in KXLY news. Word of the bird’s plight spread quickly from Spokane to the East Coast. In fact, the eagle became so popular that the story was shared by Diane Sawyer on ABC World News! 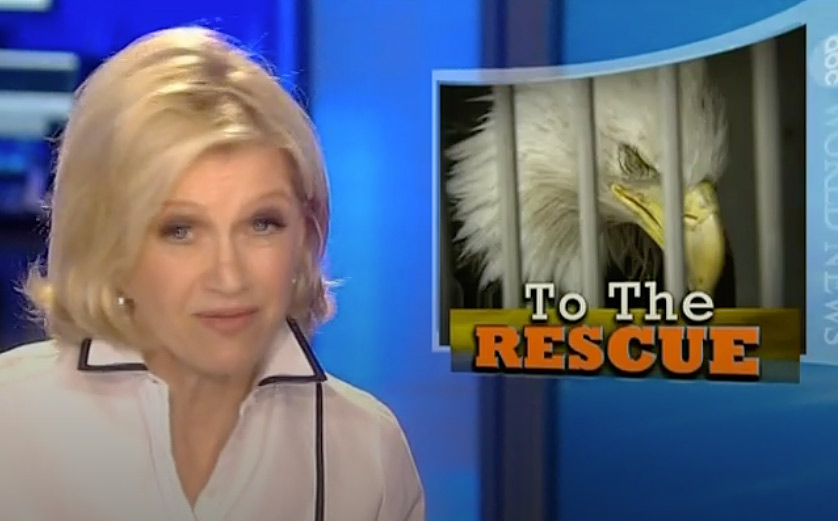 On June 4, 2012, Diane Sawyer reported the story of the eagle rescue on ABC’s World News Tonight.

Luckily, the eagle who was initially named Glen landed at Mt. Spokane Vet Clinic where they see many eagles each year. Glen had no broken bones so veterinarians thought he ate something toxic. He had not been able to keep food down so they flushed his stomach with water. When originally found, it was thought Glen had only about a 30% chance of survival.

Glen — was found to be a Glenda (female) due to pelvic measurements. She was transported to Washington State University’s Veterinary Hospital raptor program, where she was diagnosed with a broken elbow and, in their opinion, would never fly again. Veterinarians believed Glenda was about four years old and somewhat on the larger size as eagles go, weighing in about 10 pounds. 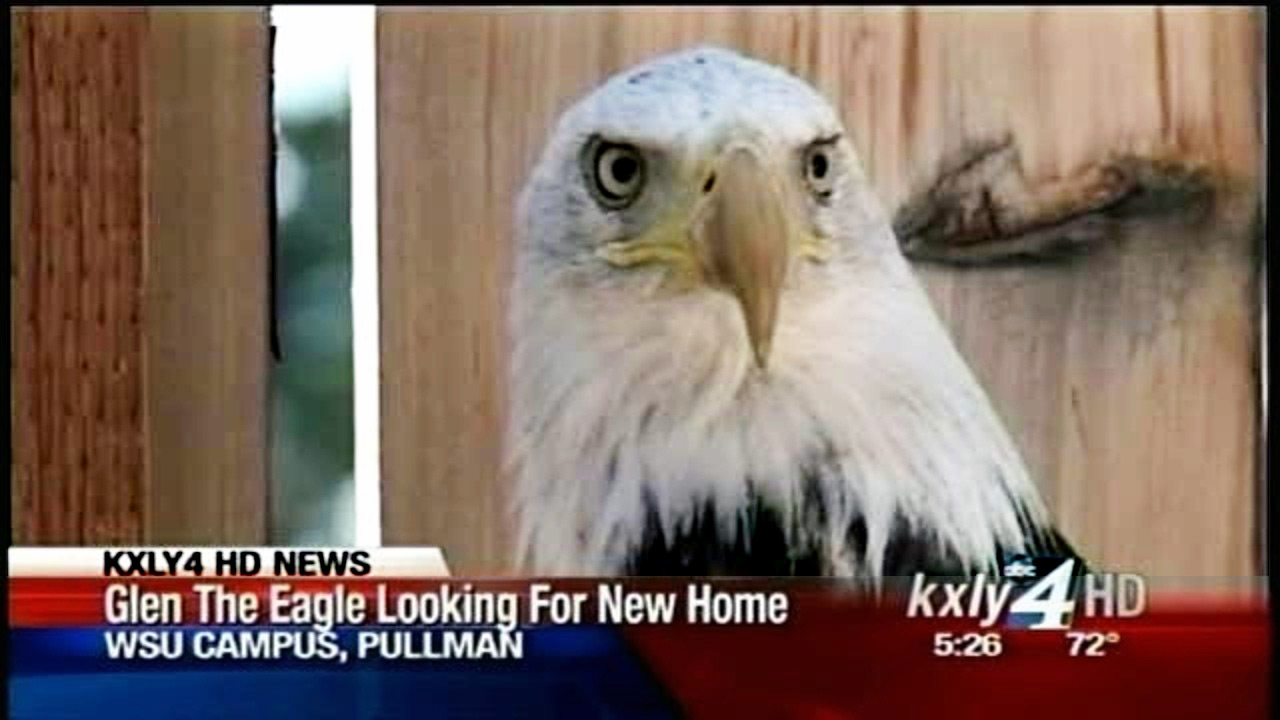 The staff at the vet hospital began working to find a permanent home for Glenda since they were too crowded to provide long term care for the eagle. In 2012, required federal and state agency approvals and paperwork were in the works to bring Glenda to the American Eagle Foundation for further evaluation. If declared non-releasable due to permanent disability, Glenda would be provided a humane life in captivity and a forever home at the AEF’s Eagle Mountain Sanctuary at Dollywood.

This is a good example of private citizens, veterinarians agencies and Non-Profit conservation organizations like the AEF working together for a common goal – the healing and perhaps lifetime care of a magnificent eagle!

In November, 2012, Glenda who had been given a 30% chance of surviving and to never fly again, beat the odds! She was fitted with an identifying ankle tag and released at the Little Spokane River Natural Area, a few miles from where she was originally found. 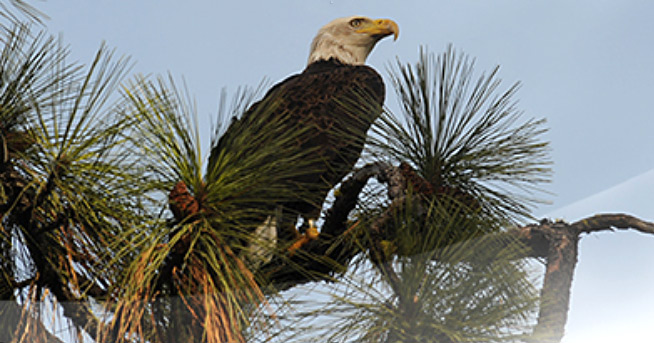 Glenda, who was only given a 30% chance of survival, beat the odds and was released in November 2012.

Unfortunately, on August 2, 2013, it was reported Glenda was back at the Mt. Spokane Veterinary Hospital after being found near Long Lake on July 31.

Dr. Jocelyn Woodd with the vet hospital said when Glenda was found, she couldn’t fly but was healthy and had a full crop of fish. In the photo below, Glenda is holding one of her wings down, but a veterinary examination revealed that nothing was broken or out of place. Speculation was that there might be some arthritis in the joint or some tendon inflammation. 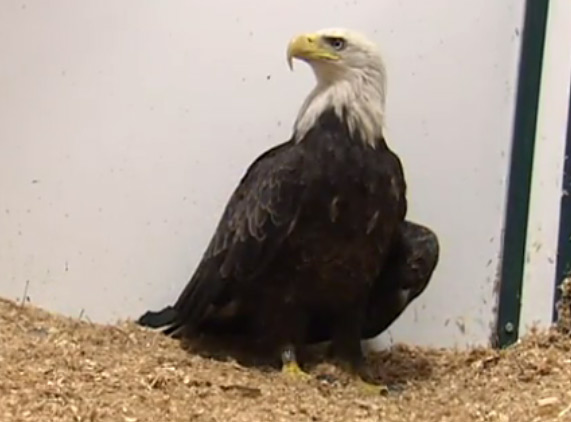 Although nothing was found broken or out of place, Glenda was holding her left wing down.

Glenda was fed and observed for a few days to see if anything developed. The doctor said Glenda looked perfectly healthy and it seemed she had been doing well over the past eight months in the wild. Veterinarians at Mt. Spokane knew they were dealing with a repeat patient because Glenda was banded, and that band helped vets identify her this time.

After determining the odds were against Glenda living safely in the wild, the process began again seeking the required permits for her to make her journey to Tennessee and the American Eagle Foundation.

Glenda arrived, thanks to Delta Airlines in Knoxville the evening of April 7th 2014, and was received by AEF staff members. She was given a preliminary physical and found to be in good health and spirits even after her flight from Washington . She was placed in quarantine for the required 30 days, She weighed 11.6 lbs. and beautiful!

Glenda was placed in the Pick-a-Mate (PAM) aviary on Eagle Mountain May 14, 2014. She will be the largest eagle in that group and will hopefully find a mate and help continue the AEF success of releasing more bald eagles into the skies of Tennessee. She went straight up the hill and sat with the rest of the group—no hesitation,  just like she fit right in! You can identify her by her size and her left wing droops due to her injury. Even with her age, she still has a few “dirty” feathers mixed in with the white. 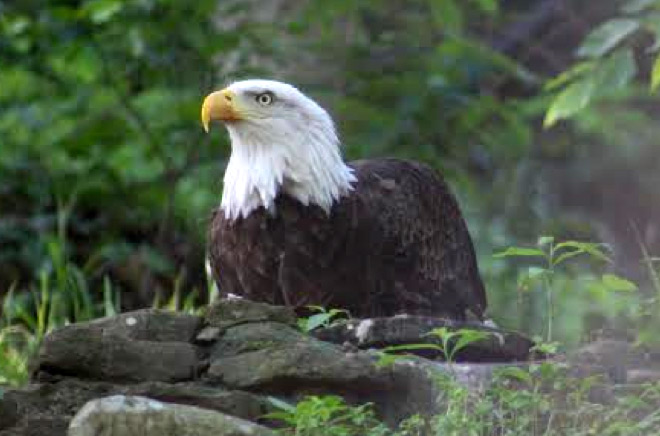 Glenda fit right in with all the other eagles in the Pick-a-Mate section. 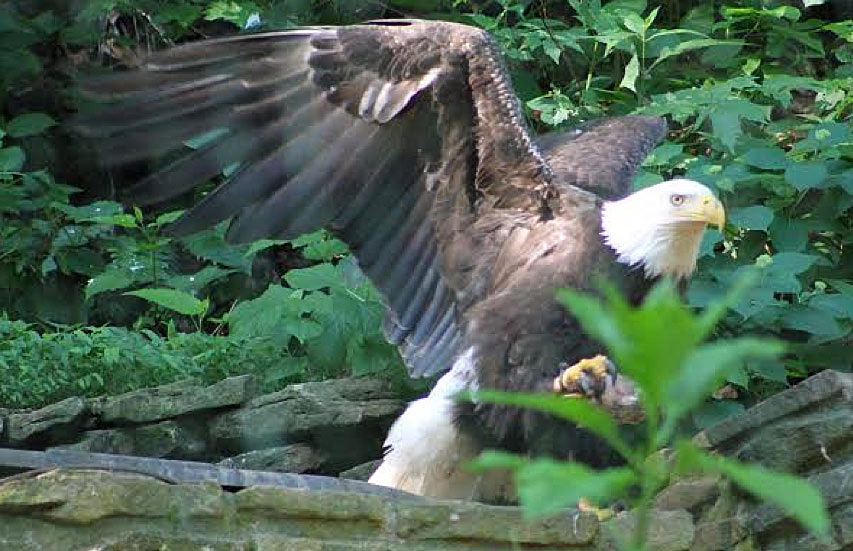 Glenda is a magnificent eagle—the largest in our Pick-a-Mate section.

This is a wonderful story of the eagle needing help and receiving it with the American Eagle Foundation where we know her care will be the very best available! Successful coordination bringing this beautiful eagle all the way from WA to TN to a new forever home.

LINKS TO MORE INFORMATION ABOUT THIS STORY

Glen the Eagle Surviving, but May Never Fly Again (article)

Glenda the Eagle Back in the Hospital (article)