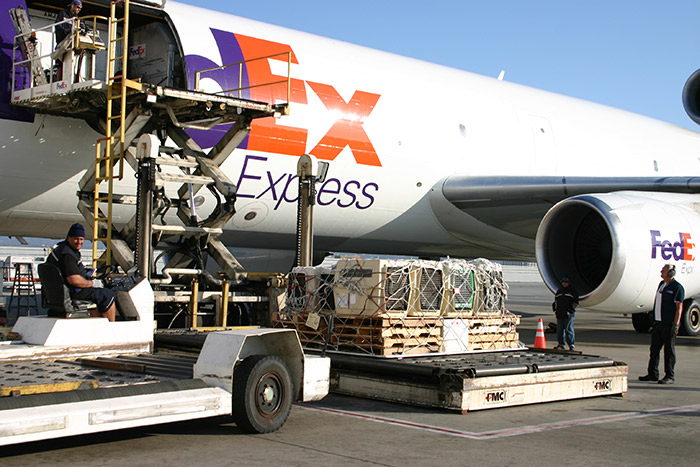 Bald Eaglets arrive safely in Knoxville after being transferred from the San Francisco Zoo, to be cared for by the American Eagle Foundation.

Pigeon Forge, TN, May 15, 2007 – The last four of  six young Bald Eagles that recently hatched at the San Francisco Zoo touched down at McGhee Tyson Airport in Knoxville via Delta Airlines on yesterday (Monday) morning. The seven-week old birds were then placed inside an American Eagle Foundation (AEF) operated nesting and release tower overlooking Douglas Lake in the foothills of the Great Smoky Mountains – where they will spend the next six weeks growing and exercising before being set free into the wild (in mid-June).  The first two Bald Eaglets arrived on May 3rd and have been eating well since being placed in their new condo-like artificial nest.

The 22-year old not-for-profit conservation group operates the United States Eagle Center at Dollywood in Pigeon Forge, Tennessee and is dedicated to the recovery and protection of the Bald Eagle. The AEF (www.eagles.org) was recently chosen by the US Fish & Wildlife Service to receive the six eaglets and also their parents. In mid to late June, ten adult Bald Eagles (five breeding pairs) will arrive in Tennessee from the San Francisco Zoo via FedEx jet – soon after the zoo’s breeding program ends this year. That program had previously supplied captive-hatched Bald Eaglets to the Catalina Island bald eagle recovery project off the coast of Los Angeles.

“We’re really pleased to receive these youngsters to further our Bald Eagle recovery program in the East Tennessee and Great Smoky Mountains area,” said AEF Founder & President Al Cecere. “We expect that these West Coast born eaglets will soon be fully enjoying the beauty and natural resources that the eastern part of our country offers.  After their release, it’s possible that some of the birds will return to this general area to set up housekeeping and raise a family in the hills of Tennessee.”

The majestic raptors arrive in Tennessee at a time when the Department of Interior and other conservation groups are focused on celebrating the national bird’s comeback. The Bald Eagle is scheduled to be “delisted” from Endangered Species Act protection by late June. Over 300 captive-bred and translocated bald eaglets have been released in Tennessee since the early 1980s – more than any other State.

On May 1st, the U.S. Senate passed a special resolution (proposed by the AEF) to set aside June 20th as “American Eagle Day” – to celebrate the bird’s dramatic recovery and  symbolic role as the USA’s national emblem.  The House of Representatives has introduced a similar resolution, and school children coast to coast are writing letters asking President Bush and their respective Governors to do the same. Also, on May 1st, the AEF was honored with a US Fish & Wildlife Service “Conservation Award” for its comprehensive strategy to help boost bald eagle numbers in the lower 48 states – especially in the southeast – including eagle reintroduction, captive breeding, and extensive environmental/wildlife education efforts.

Cecere, however, is quick to add that the nation’s Great Seal symbol isn’t out of the woods just yet.  “The Bald Eagle will soon be removed from the ESA’s threatened species status, but it has still not fully recovered. The bird’s fight for future survival will be an on-going process. It will cost millions of dollars to monitor and protect nests on private lands nationally for the remainder of this decade and beyond – to substantially return bald eagles to America’s lands, waterways and skies.”

The AEF is planning to establish an “American Eagle Fund” endowment dedicated to help monitor and protect the nation’s living symbol of freedom for future generations. The eagle preservation group needs to raise an initial $10 million in private monies for that Fund in order to receive matching funds from the U.S. Treasury that will be generated from sales of a special commemorative eagle coin set – to be marketed by the U.S. Mint in 2008. Donations can be made at the organization’s secure website, at www.eagles.org.

“It’s the responsibility of every American to participate in keeping this precious national treasure flying strong and free forever,” said Cecere.

About the AEF:
Established in 1985, the AEF is a not-for-profit charitable organization dedicated to the recovery, protection and preservation of the Bald Eagle and its habitat. The Federal and State licensed organization conducts environmental, ecological and eagle-focused education programs, and operates the world’s largest Bald Eagle exhibit and breeding facility. Since 1995, the AEF has appeared coast to coast at major events with its trained, free-flying Bald Eagle ‘Challenger,’ including at the White House and various sporting events such as the World Series, Olympics, Men’s Final Four and NFL Pro-Bowl. Donations can be made via the AEF’s website.