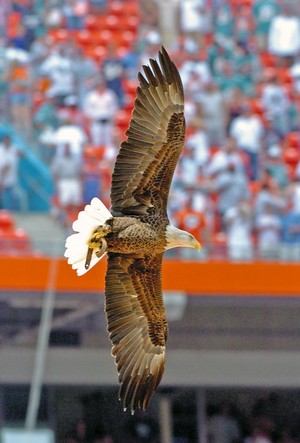 ‘Challenger’ flies at Titans / Dolphins game during the playing of the National Anthem.

The magnificent Bald Eagle, our living national symbol since 1782, may be off the endangered and threatened species lists, but it will require humanity’s assistance and protection for at least another 20 years to assure its continued recovery.

Years of reproductive failure caused by toxic pesticides like DDT – banned in the U. S. in 1972 – led to the Bald Eagle’s endangerment by 1967.

In 1983, Tennessee had only one known active Bald Eagle nest. The 130 occupied nests found in Tennessee in 2009 signal the species is recovering – but the Bald Eagle’s future is not yet secure.

The American Eagle Foundation, at Dollywood in Pigeon Forge, is dedicated to protecting the majestic Bald Eagle and its habitat. The nonprofit organization, founded by President Al Cecere in 1985, is celebrating its 25th anniversary this year. Its focus is on eagle and environmental recovery, education programs, captive breeding of nonreleasable eagles, and rehabilitation and release of injured and orphaned birds of prey.

At Eagle Mountain Sanctuary aviary, the Wings of America birds of prey show and the bird display building, Dollywood visitors get up close views of eagles, other birds of prey and the AEF’s work. More than 15 eagles are on public display at the wooded hillside aviary. Unmated eagles mingle in what’s called the “pick-a-mate” section. If a male and female take a serious interest in each other, they’re moved to a less crowded section. Hopefully, they form a lifelong pair bond, mate and lay eggs in one of the huge man-made eagle nests.

This spring two eaglets, the “Chirpy Earth Day Babes,” hatched in an incubator from eggs removed from the nest of ‘Boni Spae’ and ‘Franklin.’ Boni Spae laid two more eggs fertilized by her mate Franklin. At one day of age, the incubated “babes” were placed in the nest of adoptive parents Liberty and Justice, whose own infertile eggs had been removed and replaced with wooden eggs. The wooden eggs were removed just before the two chicks and their broken egg shells were placed in the nest. Liberty and Justice couldn’t tell the chicks were not their own. So between the two eagle pairs, aided by AEF staffers’ tactics, four eaglets were raised instead of only two. At present there are seven bald eagle breeding pairs and one golden eagle pair.

When young bald eaglets are about 6-8 weeks old, they’re moved to AEF’s hacking tower, an enclosed elevated nest cage, overlooking Douglas Lake near Dandridge. When fully developed and able to fly at about 12 weeks, the eagles – each tagged with a distinct green, orange and white wing identification tag – are released into the wild.

Since 1992, AEF has released 101 eagles at this site. Other organizations – TWRA, TVA. and the U. S. Forest Service, among them – have also released eagles in Tennessee. A total of 326 bald eagles were released in Tennessee between 1980 and 2009. Currently, there are active eagle nests in the Knoxville, Lenoir City, Cherokee Dam and Watts Bar areas, but none of them are attributable to eagles released by AEF.

Young eagles wander, as shown by several AEF-released eagles sighted in the Great Lakes region. When old enough to breed at 4-5 years, bald eagles often return to within 75 miles of where they made their first flight. With so many reservoirs and rivers within 75 miles of Douglas Lake, the efforts of the American Eagle Foundation should significantly increase East Tennessee’s nesting bald eagle population. 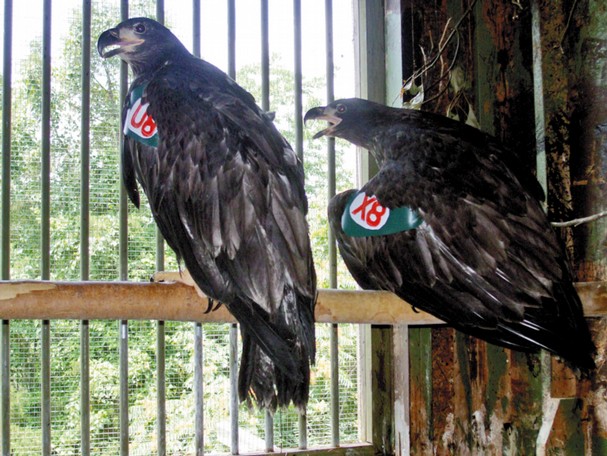 Young eagles are released into the wild from an enclosure overlooking Douglas Lake
near Dandridge, TN. Every released eagle wears a distinct identification wing tag. 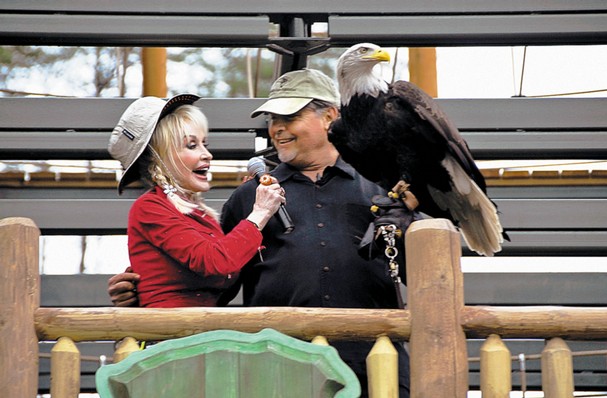 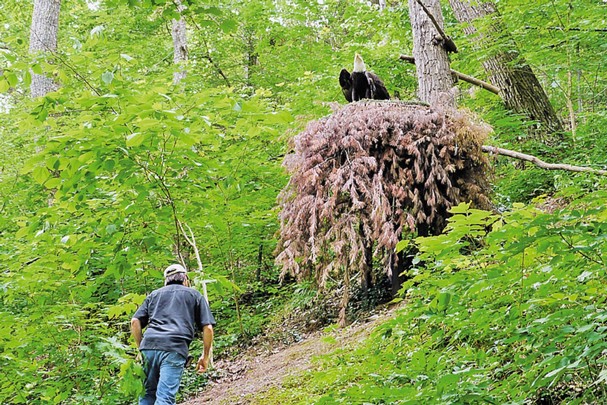 Al Cecere approaches a nest on May 14, 2010 to see if the two eggs there have hatched. He found two eaglets about two days old when he looked. 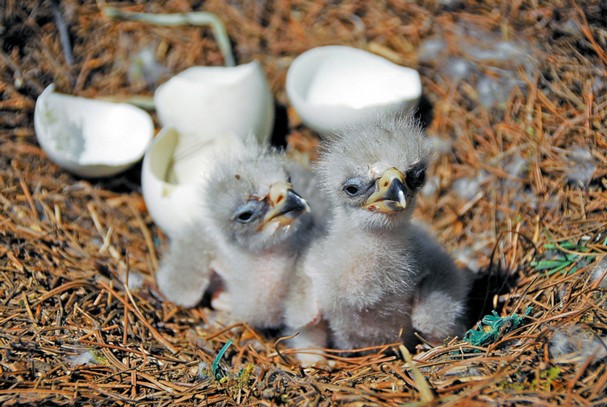 Two bald eaglets hatched in an incubator this year at the American Eagle Foundation.
They were placed in the nest of adoptive parents Liberty and Justice whose own eggs were infertile.

Rehabilitated Eaglet Released Into Wild by AEF
Scroll to top