SANTA CATALINA ISLAND – Without a safety harness, wildlife biologist Peter B. Sharpe scales a steep crag to clamp ID bands on three Bald Eaglets as their screeching parents go into dive-bomb mode. He tries not to think about a similar encounter a few weeks earlier, when an eagle protecting its nest struck him with its talons, bloodying his face.

Despite its aggressive defense, the distress call of America’s national bird is surprisingly feeble. 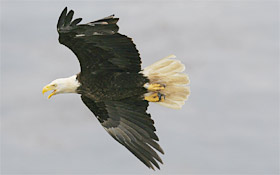 Bald Eagles once were “something you would dream about seeing,” as one expert put it after a pesticide decimated populations decades ago.Their numbers have rebounded in places such as Santa Catalina Island as a result of breeding efforts. Sean M. Haffey / Union-Tribune.

Nearly wiped out in the lower 48 states four decades ago, Bald Eagles today can be found in every state except Hawaii, which lies outside the species’ range.

The birds’ resurgence has been based on perseverance and collaboration among government agencies and dozens of grass-roots organizations.

“This is a great conservation success story, one that shows the Endangered Species Act really works,” said Mike Daulton, director of conservation for the National Audubon Society.

By Friday, eight years after the federal government first proposed removing the bald eagle from the endangered species list, the U.S. Fish & Wildlife Service is expected to make it official.

State and federal laws would still protect the bird, but federal officials are proposing a permit process that would allow developers and private property owners who meet stringent conditions to remove its nests 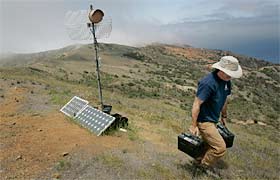 In addition, a federal team will monitor the species’ status for five years.

“As their populations increase, (the birds) are becoming a lot more adaptable,” said Suzanne Audet, a federal biologist in Spokane, Wash., who will head the team.

But as the eagle population expands, so will conflicts concerning property rights.

“Bald Eagles use habitat – shorelines and waterfront – that the American public likes to develop,” Audet said

Damien M. Schiff of the Pacific Legal Foundation in Sacramento said the government’s proposed safeguards are too onerous for property owners.

“They’re trying to import all the protections of the Endangered Species Act into the (new regulations), which is inappropriate,” he said. “If the Bald Eagle has been recovered, there’s no reason to maintain the same level of protection.”

Schiff represents a Minnesotan whose successful lawsuit last year prompted a judge to set a June 29 deadline for removing the bird from the endangered species list. Although the U.S. Fish & Wildlife Service had declared the Bald Eagle’s recovery a success in 1999, years of further studies and document preparation followed.

With its 7-foot wingspan, powerful talons and white head, the Bald Eagle has a commanding presence. The birds are primarily fish eaters, but they will take other prey, too.

“I defy anyone who sees a Bald Eagle flying overhead not to say: ‘Wow!’ ” said Phil Unitt, curator of birds and mammals at the San Diego Natural History Museum.

Before the arrival of Europeans, North America’s Bald Eagle population may have ranged from 250,000 to 500,000. The birds declined because of human activity too close to nests, pesticides that poisoned their food chain, and illegal shooting.

Even after the Continental Congress designated the Bald Eagle as the nation’s emblem in the 1780s – its image is on the Great Seal of the United States – the bird was routinely shot for its feathers and as vermin by ranchers, farmers and fishermen.

Shooting Bald Eagles was outlawed in 1918 by the Migratory Bird Treaty Act. The Bald Eagle Protection Act of 1940 extended the protections to nests and eggs.

But the bird’s numbers continued to fall.

The nation’s most recognizable raptor may have never rebounded without the publication in 1962 of Rachel Carson’s Silent Spring.

The book connected the dots between the pesticide DDT, widely used to curb mosquitoes and agricultural pests after its invention in 1939, and the collapsing U.S. populations of bald eagles and other fish-eating birds.

The Bald Eagle’s population hit bottom in 1963, when the number of mated pairs in the lower 48 states fell to 417. Today, those states host more than 9,700 mated pairs.

Prompted by the evidence documented in Silent Spring, Congress in 1972 banned the use of DDT. A year later, the Endangered Species Act was passed and recovery of the Bald Eagle became a national imperative.

Bald Eagles were so scarce that “it was something you would dream about seeing,” said George Wallace, vice president of the American Bird Conservancy in Washington, D.C.

“It’s really gratifying to see a bird go from very rare to quite common,” he said. 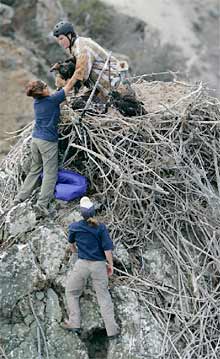 Biologist Jessica Dooley watched as Sharpe and his assistant, Steffani Jijon, balanced precariously to retrieve the last of three eaglets last month to take blood and attach identification bands. Bald Eagle nests are 4 to 6 feet wide and can weigh up to 1,000 pounds. In the past two decades, 109 Bald Eagles have been reared and released on Catalina. Sean M. Haffey / Union-Tribune.

Biologist Jessica Dooley watched as Sharpe and his assistant, Steffani Jijon, balanced precariously to retrieve the last of three eaglets last month to take blood and attach identification bands. Bald Eagle nests are 4 to 6 feet wide and can weigh up to 1,000 pounds. In the past two decades, 109 Bald Eagles have been reared and released on Catalina. Sean M. Haffey / Union-Tribune.

Until Bald Eagles built a nest near Lake Henshaw in 2004, the last known nest recorded in San Diego County was at Little Tecate Peak in 1936.

The Henshaw eagles appear to be untagged and unbanded. But about 50 miles north at Lake Hemet in Riverside County, the female of a nesting pair carries an orange tag that shows she came from the Catalina breeding program.

The Endangered Species Act has helped to protect eagle habitat and funnel resources toward successful restoration techniques. Tens of millions of dollars have been spent on such efforts during the past 40 years.

While state and federal agencies oversee the restoration efforts, many nonprofit groups and volunteers have offered their help and expertise.

Among the legions of eagle enthusiasts is David K. Garcelon. In 1976, while attending Humboldt State University, Garcelon decided to dedicate his life to re-establishing the Bald Eagle on the Channel Islands off Southern California.

Eagles on the eight-island chain had been wiped out after DDT affected their ability to reproduce. The pesticide entered the birds’ food chain from a manufacturing plant that discharged it into the ocean through a sewage outfall off the Palos Verdes Peninsula near Los Angeles. The DDT caused the birds to lay thin-shelled eggs that either broke in the nest or otherwise failed to hatch.

In 1980, Garcelon founded the nonprofit Institute for Wildlife Studies in Arcata, just north of Eureka, to restore the bird’s population on Santa Catalina and the other Channel Islands.

Bald Eagle eggs were taken from nests in Canada, Washington state and Northern California and hatched at the San Francisco Zoo. The chicks were transferred to Catalina, raised in high-rise cages called hacking towers and released when they could fly. After adult eagles on the island began reproducing, biologists took their eggs and incubated them in a lab.

“I had to create it all from scratch and make it work because no one had the same faith in it that I did,” said Garcelon, now 53. 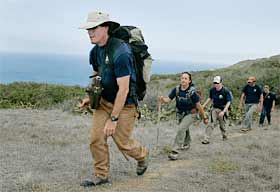 Wildlife biologist Peter B. Sharpe, who is in charge of the Channel Islands eagle breeding project, leads his team on a 45-minute hike up one of Catalina’s steep crags to a nest containing three Bald Eaglets. Sean M. Haffey / Union-Tribune

For example, he pioneered the perilous technique of hanging from a helicopter to recover eagle eggs from cliff-top nests. Garcelon began passing along his knowledge to Sharpe, the wildlife biologist, in 1997, when Sharpe joined the institute as a graduate student. Sharpe eventually took over the Channel Islands eagle project.

This spring on Catalina, four chicks became the first to hatch there on their own since the mid-1940s. The island now supports 20 adult and juvenile eagles and 11 chicks, including the three that Sharpe climbed the crag to band. Over the past 20 years, 109 Bald Eagles have been reared and released on Catalina.

Blood drawn from the eaglets enables biologists to determine the birds’ gender and measure the amount of DDT passed to them from their parents. Catalina’s Bald Eagles still have high levels of the pesticide in their tissue.
“It’s pretty exciting work because we can see the results of what we’re doing,” said Sharpe, 41, who has a doctorate in zoology.

A decade of gritty field work at modest pay has not dulled his resolve. “I’d like to finish up this work until we’re not necessary anymore,” he said.

Federal funding for the raise-and-release project on Catalina has shrunk, Sharpe said, forcing him to raise much of his group’s money from private donors.

Nationwide, much of the cost for monitoring bald eagle populations has shifted to state agencies.

“Conservation grants will still be available to state and tribal wildlife agencies,” said Valerie Fellows, a spokeswoman for the U.S. Fish & Wildlife Service. “There should be little change in funding if eagles are delisted.”

Despite such assurances, Al L. Cecere of the American Eagle Foundation fears that overall funding for eagle conservation will decline.

His group, based in Pigeon Forge, Tenn., wants to establish a $100 million endowment to support ongoing education, research and habitat programs nationally.

“It’s imperative for the American people to become empowered and finish the job of protecting the nation’s symbol of freedom – forever,” said Cecere, the foundation’s 59-year-old founder. “Each generation has to be taught the lesson that we learned from the Bald Eagle.”