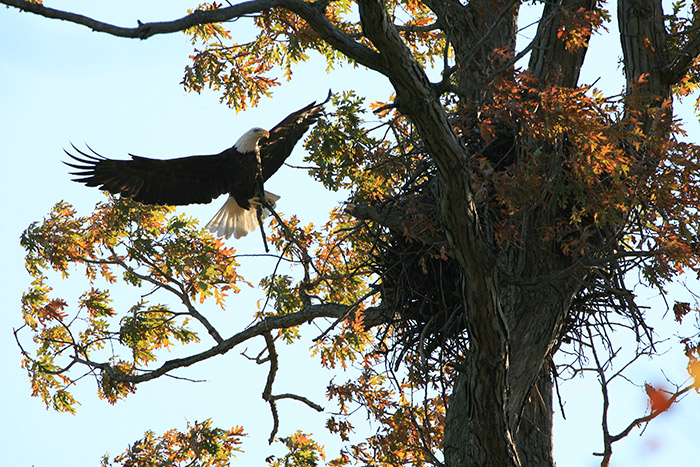 The Bald Eagle is being removed from the Endangered Species List.

You may have learned in school that Ben Franklin wanted the wild turkey to be the symbol of America, but instead our founding fathers picked the Bald Eagle, but they haven’t always had an easy life here in America.

Bald Eagles were close to extinction, first hunted, and then devastated by the use of the now banned pesticide DDT.

“It got in their systems every time they tried to lay eggs, shells would break with no breeding,” said Katie Warner from the Audubon Center for Birds of Prey.

Back in the sixties, there were just over four hundred breeding pairs in all of America.

Today there are ten thousand…leading the federal government to remove the Bald Eagle from the Endangered Species List.

At the Audubon Center for Birds of Prey near Orlando, Florida, this is a symbol of just how well protections have worked.

Another Bald Eagle has been rehabilitated, and is getting ready to be released back in the wild where conservationists know she has a good chance at a good life.

Even off the Endangered Species List, Bald Eagles will still be protected under a federal law.

They can’t be killed or harassed, and their numbers are expected to continue to grow.

It seems the national emblem is now a symbol of how federal protection can save a species.

In Tennessee, state and citizen-led restoration efforts have helped bring the animal back from the brink of extinction. But activist Al Cerere says the work to fully restore the national bird isn’t over.

Cecere founded the American Eagle Foundation, based at Dollywood theme park in Pigeon Forge. He and the center’s free-flying eagle Challenger joined Interior Secretary Dirk Kempthorne in Washington today to announce that the Bald Eagle—once nearly wiped out by hunters and DDT poisoning—will no longer require protection under the Endangered Species Act.

Nowhere has the gain from rescued eagles been greater than in Tennessee, where more than 300 captive-bred and translocated eaglets have been released since the early 1980s — more than any other state. Only one pair of eagles was recorded in Tennessee in 1983. Today, there are about 115 pairs.