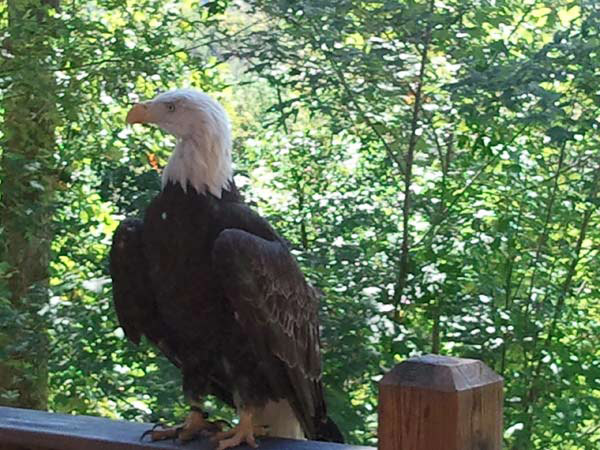 Volunteer was seen perched on a deck railing in Wears Valley.

The Eagle ‘Volunteer’ was seen by a tourist staying in a rental cabin in Wears Valley on Monday, Oct. 2nd (off Alf Owenby Road). The tourists were awakened after the eagle crashed into the glass window of their cabin on Monday (no broken glass). After the crash, the eagle was observed sitting on the deck for awhile (as shown in attached photo), and then flew to into a tree.

The tourists thought the bird was a wild bird living in the Smoky Mountains park, so did not know to call anyone. Then, two young boys were throwing their football on a their back country road in front of their house (200 ft. from the rental cabin) and saw the eagle fly low over their heads and onto the roof of the same cabin. They told their dad, and the dad walked up to the rental cabin where the tourists were staying, and told the tourists that the eagle may be one that recently escaped from Eagle Mountain Sanctuary at Dollywood.

The tourists then called the American Eagle Foundation president Al Cecere at about 10 a.m. on Tuesday morning Oct. 4th and also emailed some photos. So after receiving the call today, AEF staff members Al Cecere and Rob West were immediately dispatched to the same general Wears Valley area today (Tuesday) where they had previously seen the eagle on Sunday morning, Oct. 2nd (after receiving an evening phone call from a Dollywood person who gave us the phone number of a helicopter pilot who lived on a 400 acre cattle farm).

It was there that Al and Rob set their spring-loaded netted safety trap and baited it with a trout, quail, and white rat (a familiar diet to the eagles at Dollywood). After that, they waited patiently until the bird flew down closer to look at the food. The bird was definitely hungry and approached the trap several times cautiously before actually jumping on the food. It was then that the trigger on the trap was pressed and the net flew over the top of the bird.

Al Cecere and Rob West gave a thorough physical check up to the bird after its capture and found no abrasions or injuries. The eagle’s keel (chest) bone was a bit thin, indicating the eagle was hungry, but had probably gotten a little carrion (dead animals) during its 3 week and 2 day adventure. The eagle was also given some Fiji water to hydrate it and a quail, trout, and white rat – which it immediately devoured.

Throughout the 3 weeks and 2 days that the eagle was missing from its Eagle Mountain Sanctuary aviary at Dollywood, the eagle had a pattern of landing in trees near houses or buildings and people milling around and small streams. The AEF believes that the eagle was looking for places very similar to the setting of its aviary at Dollywood where it gets a daily meal of trout, quail, or white rat. Eventually, the eagle would have been killed by motor vehicles or other human hazards.

On Saturday, Oct. 1st, the eagle had circled over the helicopter pilot while he was doing maintenance work on his bulldozer and landed in a nearby tree in Wears Valley (after leaving a tree perch on Mt. Harriman at Ober Gatliburg on Sunday morning, Oct. 2) . On Saturday evening, the pilot called the AEF’s Al Cecere and sent some photos by email. Al and Rob of the AEF went to the man’s farm at dawn on Sunday morning Oct. 2nd. On that Sunday morning, Al and Rob found the bird in a cow pasture and tried to catch it with their netted safety trap. After 2 hours of waiting the eagle flew off into a forest where it could not be found again that day (Sunday).

The video below shows the whole story—enjoy!