This spring, three pairs of non-releasable Bald Eagles laid eggs inside the enormous aviary at Eagle Mountain Sanctuary on the Dollywood Park. Three eaglets grew up in two nests: Isaiah & Mrs. Jefferson raised their own two, and Hero & Volunteer skillfully fostered a baby eaglet when their own eggs were determined to be infertile. Franklin & Independence, the third pair, laid three infertile eggs and did not raise babies this year.

For the first time ever, the nest of Isaiah and Mrs. Jefferson was featured on our high definition video camera. Vewers and chatters watched these eaglets every day, experiencing all the nest activities and antics of the two babies.

All three eaglets were recently removed from their Dollywood nests and transferred to the AEF’s artificial nesting tower on Douglas Lake in the foothills of the Great Smoky Mountains. For more information about why the eaglets are taken from their nest and placed in the AEF hack tower, click here.

In addition, two of our off-site Bald Eagle breeding pairs, Peace & Faithful and Freedom & Faithful Spirit, successfully raised one eaglet in each of their nests. Our Golden Eagle Pair, Wankan Tankan and Cheyenne, raised two beautiful eaglets that were recently transferred to the SIA Comanche Nation Ethno-Ornithological Society in Oklahoma to be used for educational and ceremonial purposes.

Watch a recap video of the AEF nesting season, narrated by Beth Parker 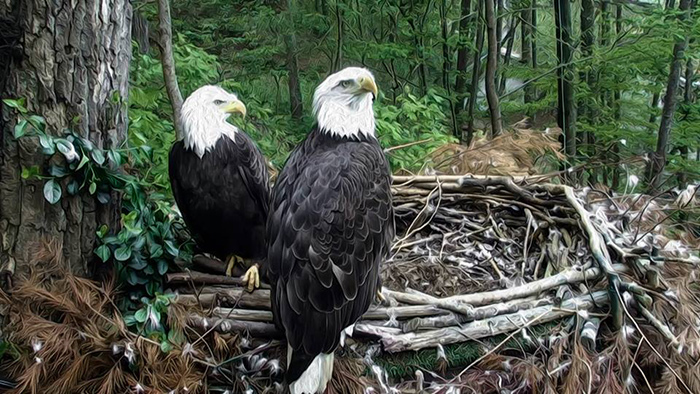 Normally, as we have done during so many previous years, we would be featuring the nest of Bald Eagle pair Independence and Franklin. Due to a storm last summer that caused massive damage to their aviary structure and netting, this pair was temporarily relocated into a different aviary at our off-park facility while the damage was being repaired over a period of several months. Also, the left wing of Independence was slightly injured, which required some rehab treatment away from her mate.

Prior to being placed back into their familiar nesting aviary on the Dollywood Park, the pair was temporarily placed inside a private breeding enclosure located off the Dollywood Park. They returned to a cleaned-up and repaired aviary in February. In early March, Independence laid three eggs. However, all three eggs were infertile.

Today, Independence and Franklin seem to be happier than ever living back at their Dollywood home. The American Eagle Foundation is hopeful that next year will be a successful breeding season for this sensational pair of resident eagles.

The AEF does not yet have a camera focused on the nest of Hero and Volunteer, but below are photos of the baby eaglet they fostered in their nest. This eaglet will be released into the Great Smoky Mountains from the Douglas Lake Hack Tower in East Tennessee during the annual Chat Reunion the week of June 26, in honor of Retired Colonel Donald Lee Keil, U.S. Army and father of Chatter Parker Allens.

Top: Isaiah (Left) and Mrs. Jefferson (Right)
Below: The pool at the bottom of their enclosure is a favorite place to cool off.

As we had not initially planned to have direct camera access for the nest of Mrs. Jefferson and Isaiah, we only had overhead cam access after the babies had hatched. However, we hope you will enjoy the Scrapbook that has been put together for their nesting season. We especially thank the Chatters, who supplied us with hundreds of photos and a few videos they captured of special moments in the nest.

Of course, our cam operators and moderators make the experience so much better for everyone viewing, and we appreciate their dedication and expertise. In addition, they are a welcoming presence in our Chat Room, and ensure that visitors to our nests feel “at home.” Thank you, mods and cam operators, for your support of the American Eagle Foundation!

Week Five ~ Our eaglets are growing up!

Week Seven ~ Their last week in the nest. 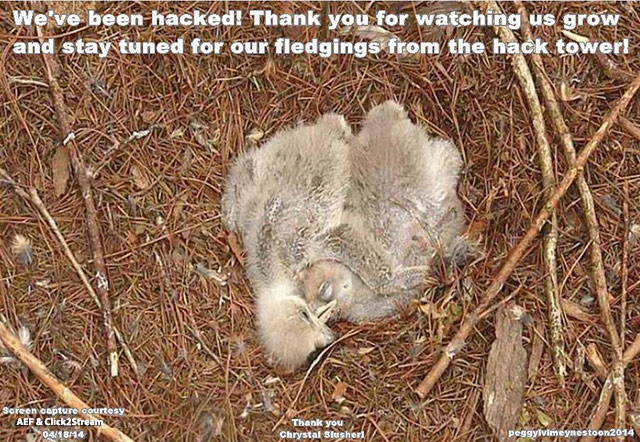 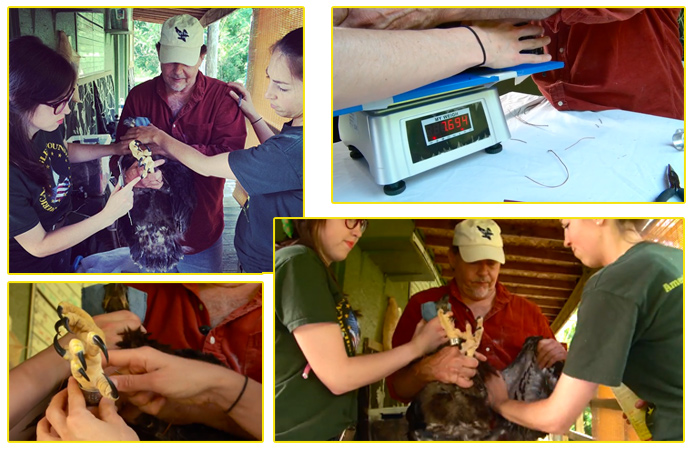 Why are the eaglets removed from the nest and taken to the hack tower instead of letting them remain with their parents?

AEF makes every effort to prevent the eaglets born in captivity from seeing over the top of the nest and downward toward nearby humans. After eaglets are over 5 1/2 to 6 weeks of age, they can normally extend their necks over the edge of the nests, and see not only visitors at Dollywood, but also AEF caregivers bringing food into the aviary. While it is fine for the parents to see humans do this, it is a risk for the young eaglets to associate humans with food, because they might never learn to hunt on their own and would therefore not be able to survive in the wild. In addition, while living in their spacious compartments in the Hack Tower, the eaglets soon acclimate to the wider world of nature. They see Douglas Lake right outside their window, the forests surrounding the lake, and we know for certain that there is a good chance they will eventually come back to the same general area from which they first fledged to build nests and raise eaglets of their own.  In fact, one of the eaglets born in the nest of Independence and Franklin in 2007 brought her mate back to this area and now has an established nest where babies have been raised.

Watch a short video narrated by Bob Hatcher about the success of the Bald Eagle Hacking program in Tennessee.


Videos from the nesting season:

This is the nest of non-releasable Bald Eagles “Mrs. Jefferson” and “Isaiah.” They live on Eagle Mountain Sanctuary at Dollywood, in Pigeon Forge, Tennessee. This season, they are parents to two little eaglets, featured in this video. At the time of the video, they are just 3 weeks old (they hatched on April 5, 2014).

On May 21, 2014 three eaglets, 6 1/2 weeks old, were removed from 2 different nests on Eagle Mountain Sanctuary at Dollywood –  they have “graduated” to the Hack Tower to begin the second chapter of their lives.

Two eaglets were hatched and raised by non-releasable Bald Eagles “Mrs. Jefferson” and “Isaiah” – and the other eaglet had been fostered by non-releasable Bald Eagles eagles “Hero” and “Volunteer.” After being gently “gathered up,” the eagles were banded, weighed, and given a physical examination. Then they were taken to the American Eagle Foundation Hack Tower overlooking Douglas Lake in East Tennessee.

There, the eaglets will complete their growing up in a setting overlooking the lake and forests. Caregivers will monitor their health and progress daily, but the eagles will not be able to see the caregivers, or know that their food is being furnished by humans. That is to ensure that they will be able to survive on their own in the wild. If they had remained in the nest on Eagle Mountain Sanctuary, they would have soon started to hop on the rail of the nest and see caregivers bringing food. This would have compromised their ability to live on their own.

Following their release, they will follow flyways up the Ohio, or to the Great Lakes to mingle with others of their kind. Their instincts to hunt and survive are hard-wired, but they will also learn from older eagles along the way. We wish them safe journeys and long lives! We hope they will eventually come back to East Tennessee to raise babies of their own.

Enjoy a memory from May 21st. – We see the eaglets’ last day in the nest and the removal of the two eaglets from Isaiah and Mrs. Jefferson’s nest, and one eaglet fostered by Hero and Volunteer. The eaglets were examined, weighed, banded, and taken to their new digs at the AEF Hack Tower.

Release of ‘Hallmark’ during Chatter Reunion