This is the story about 3 little eagles and how they grew.  It is also a story about their parents, Independence and Franklin – both non-releasable Bald Eagles, originally from Alaska, who found a forever home in the foothills of the Smoky Mountains in Pigeon Forge, Tennessee. It is also the story about a community of eagle watchers, chatters, moderators, and caregivers — all with one goal in mind: to help the babies grow up safely while sharing their story with their larger network of friends and associates.

So let us begin.

In the cold month of January, Al Cecere – “Chief Eagle” of all of us, went about reconstructing a larger, stronger, higher, safer nest for the offspring we hoped would come.  We were sure Indy and Frank would approve the changes! The nest looked magnificent—sturdy, replete with fresh greenery, totally natural in appearance.

Al wanted to make the viewing experience better than it had been before, so, after lots of research, 4 cameras were purchased, one a tilt-pan-zoom, to create a true Eagle Reality show.  From 4 different angles, the viewers could choose the picture they liked best – and then change it whenever they wanted.  The tilt-pan-zoom cam (Cam 1) became the Signature Cam where detailed, up-close viewing was possible.  And, to top it off, Al put a microphone in the side of the nest to capture all the eagle chirps, calls, loud screams, and extraneous noises from the mountainside.

During March, Indy and Frank seemed to be quite interested in fixing their nest just like they wanted it to be — Lots of screen shots were taken by many of us showing them on the side of the nest, bringing sticks and stuff into the nest, having long eagle discussions about where to put a particular stick…. Surely they were thinking about increasing their family.

WE WERE EGGSCITED!  According to OUR calendars, and understanding that eagle egg incubation was about 35 days,  E-1 should hatch on or around April 28. E-2 would hatch 3 days later – May 1, and E-3 would hatch on or around May 5. There was only one slight aberration: after the first egg was laid, the parents were not particularly interested in brooding it. We worried.  And after the second egg was laid, brooding picked up, but was not as intense as we thought it should be.  We fretted. However, after the third egg was laid, the parents got down to business and brooding took on a new meaning!  We still wondered about the first 2 eggs. There were “private” emails that went back and forth expressing grave concerns.

When “due dates” came and went – and no pips were apparent (once we thought there was a pip, but it really wasn’t), more “worried emails” hit cyberspace.  The moderators were fabulous throughout, encouraging viewers to be patient, to “wait and see.”

And, just when we thought it would NEVER BE, pips in 2 eggs were clearly seen on May 6th.  Even though the first 2 eggs had been laid 3 days apart, and the 3rd egg did not come until 4 days after the 2nd, all hatched within a 2-day period. PIP PIP Hooray!

A Scrapbook of Memories 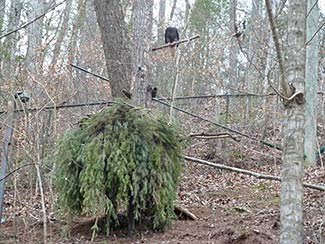 The home of Franklin and Independence – renovated and awaiting occupancy! 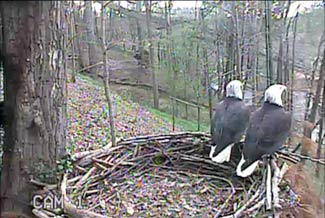 Checking out the neighborhood. 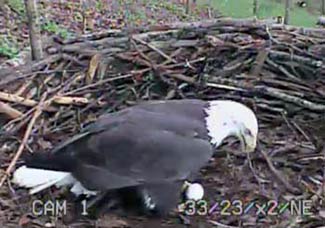 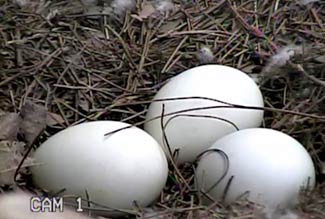 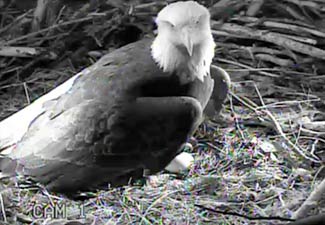 And at night our infrared cameras let us observe without disturbing the eagles in any way. 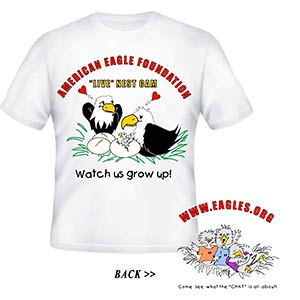 We bought Tee-Shirts (designed by “Oul”) 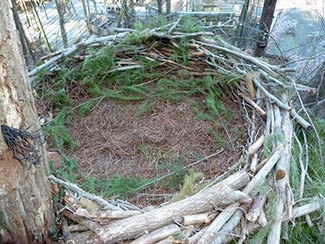 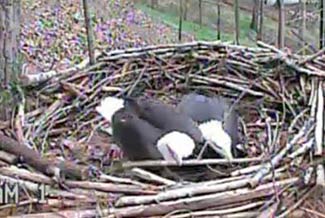 A bit of interior design. 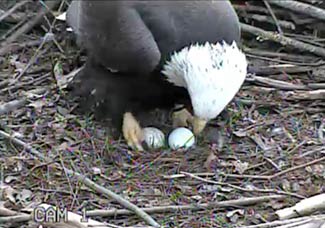 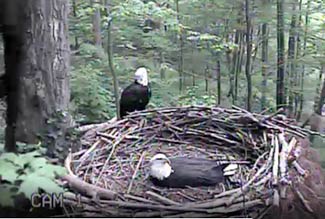 And now brooding begins in earnest — All day. 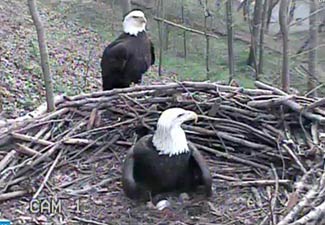 Both parents shared in the responsibility of brooding and protecting the eggs. 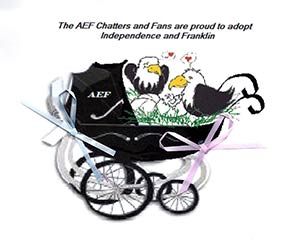 And “adopted” Indy and Frank – TWICE!

This is Eagle Mountain Sanctuary. This is their home.
Here they are protected, nurtured, loved.

Their parents — never again able to fly in the wild
– and restricted to a space on a shady, peaceful hill—
still find companionship and purpose for life,
forming bonds that will last their lifetime.

The cycle of life repeats each spring.
Eggs are laid, guarding secrets of newly forming life inside.
The parents guard them with their very lives,
knowing the value of what it is they are protecting.

A scratch, a tear, a tiny breathing space. And then a small hole.
Hours of work till finally the exhausted tiny life escapes the small space of shell
and enters a world he will someday soar above.

Two others are hatched – all in the space of 30 hours.
Fighting for dominance and survival – hard wired instincts. 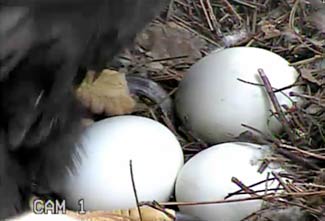 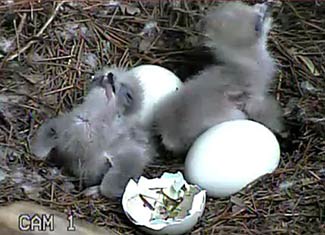 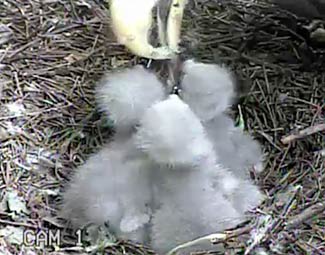 On May 8, the family was complete. 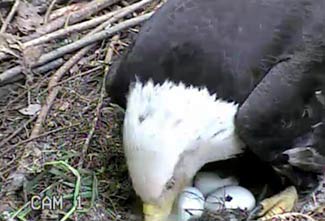 Yes, indeed! We were absolutely beside ourselves. 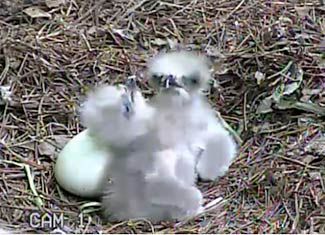 It was like we were in the nest. Amazing views. 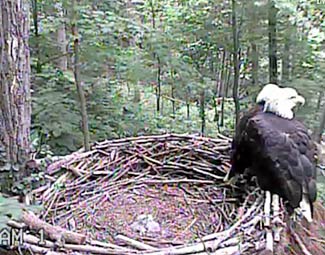 Independence and Franklin take a break. 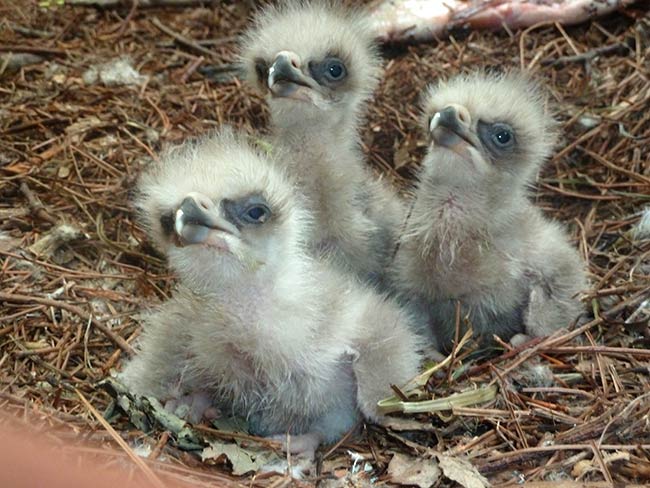 On May 9, Al went into the nest to check on the 1 & 2 day-old babies. They were fine, and he got this amazing photo! 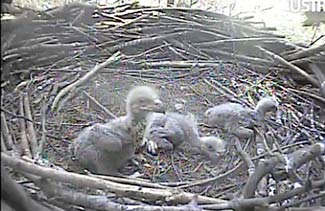 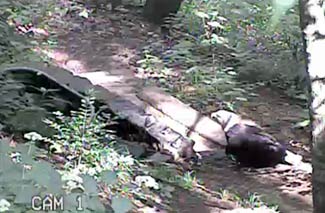 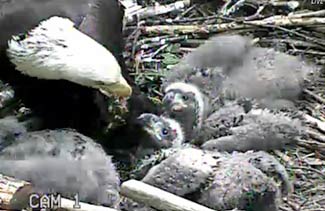 By June 5, 4.1 weeks old, pin feathers are beginning to appear. 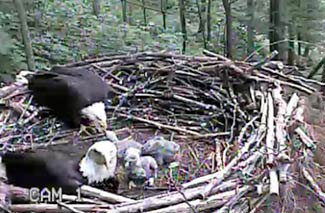 …to feed to the babies! 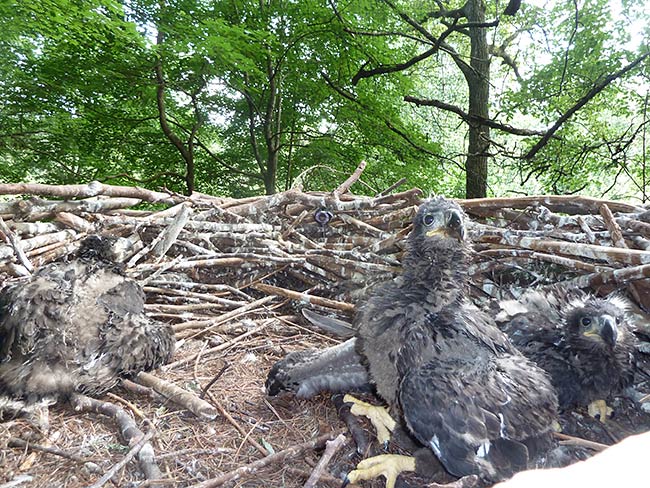 Another check-up on June 16: the nest is a bit the worse for wear, but the eaglets, 5.7 weeks old, are thriving! 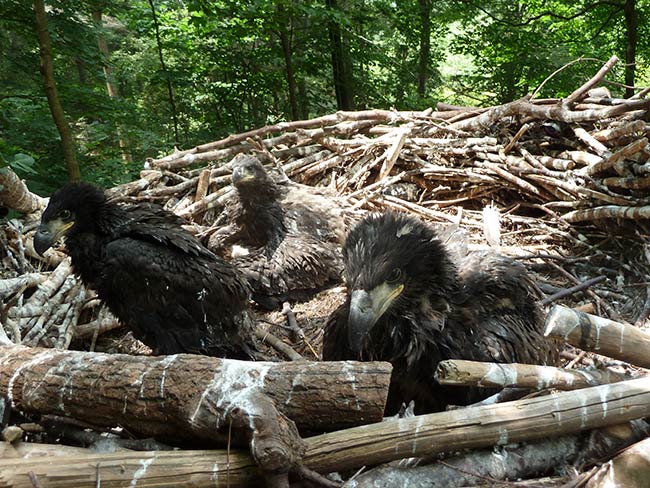 When one of the eaglets climbed on the railing June 20 at 6.3 weeks of age, the decision was made to “graduate” them to the Hack Tower on Douglas Lake. 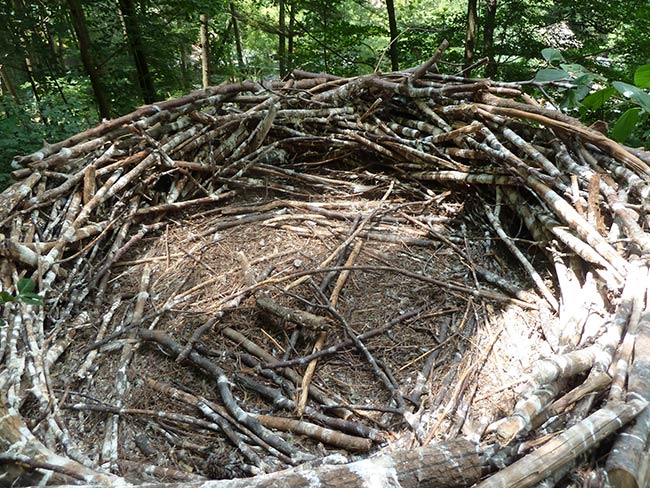 Leaving us with memories to cherish. 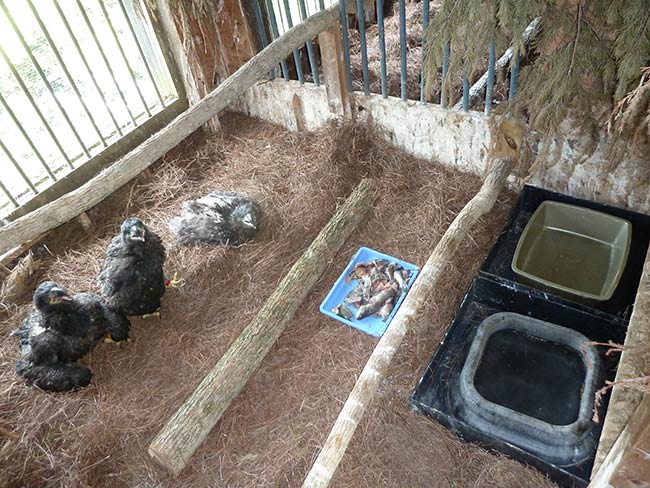 At the Hack Tower on Douglas Lake, the eaglets have lots of room, perches, fresh fish & water, and a million dollar view. 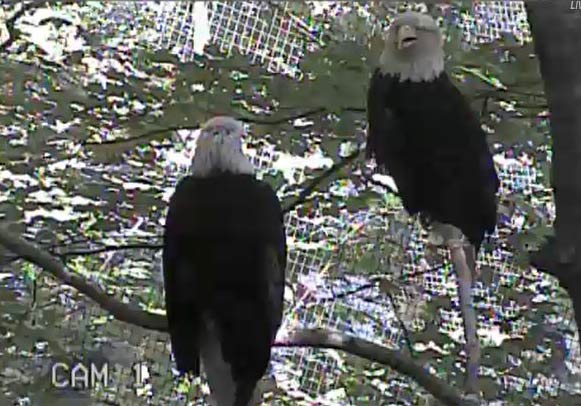 Indy and Frank quickly adjust to being “empty nesters” and enjoy the company of one another on Eagle Mountain Sanctuary.

Farewell from all who watched you grow,
We hope that you will live and know
That, once you fly and feel the air,
Your soul will breathe for us who care,
And when we see an Eagle fly,
We will remember this goodbye.

At 7 weeks of age, three eaglets hatched in the nest of non-releasable Bald Eagles “Independence” and “Franklin” were taken to the Hack Tower on Douglas Lake. They will spend the next several weeks there in a spacious habitat overlooking a beautiful lake and a heavily forested area. At about 13 weeks of age, they will be released into the wide world of nature. We wish them safe journeys and long life.

Re-release of Griffith and Sergeant

A successful re-release for both Sergeant and Griffith from the AEF Hack Tower on Douglas Lake was streamed live September 29, 2012 via our UStream Channel. Sergeant (3 years old with a beautiful white head and tail) flew away as soon as the bars were raised, but Griffith lingered for an hour or so before she, too, winged her way into the wild. Our love and prayers go with these eagles – we hope they will have safe journeys, lots of food, and one day, eaglets of their own!

A narrative about the eagle release by Al Cecere:

BraveHeart finally flew off yesterday (8-15-12) at 6 p.m. after we had already packed up all our camera equipment for the day. She flew very well and high and landed in a small tree on the same shoreline of the lake cove where Ranger has been perched for the past couple days. Rob and Christine are out at the lake this morning (8-16-12) dropping fresh trout along the shore and on the roof of the hack tower to make sure both birds have access to some food while they are discovering their new world around Douglas Lake. They do this in a manner whereby the eaglets do not see them doing it.

When the big 12 lb female (Griffith) flew for the first time yesterday (8-15-12), she landed in the woods on the ground. Then, she took off and flew across the lake, but did not quite make it to the other side and landed in the lake. She swam to a nearby shore. Rob and Christine took the boat to that side of lake to get her out of the water and place her back into the hack tower for another chance to fly again. After she dried off and preened all her feathers while perching on the nesting tower, she stayed on the tower for the rest of the day. After her placement back into the hack tower, we were observing that she only lifted her left foot to rest, rather than taking turns with each leg like the other eaglets did when they were on the tower (prior to their flights). Raptors will usually switch off resting legs when they are perched for long periods of time. They do this mostly when they are relaxing (and even sleeping at night).

At the end of the day, we decided to close the nesting cage door like we did the night before (to give added protection to the bird during the night from potential raccoon encounters, etc.). Before, we left the tower site for the day, we decided to catch up the eaglet and give her a quick physical, since she had flown that day and landed in the lake. We also felt after observing her closely for a couple hours that she might possibly be favoring her left foot more that the right one. In checking, we discovered a significant abrasion on the bottom pad of her right foot, a sensitive area of the foot for raptors. She may possibly have hit her foot hard on some object while landing on the ground in the woods (rock or sharp stick) or even could have grabbed onto a tree limb briefly on her way down to the ground. We really don’t know because she landed in the woods. We decided last night to take the eaglet back to the AEF facility for a check up by our vet tech and veterinarian – and to treat the abrasion. We did not want the foot to become infected and cause a serious problem for the bird once it was in the wild. Once this abrasion has healed, we will likely place the eaglet back into the hack tower for release. We will be extra cautious about the way we continue to feed the eaglet during this process, so it does not know humans are providing the food. I do not know at this time how many days we are talking about until we have been able to fully assess the situation.