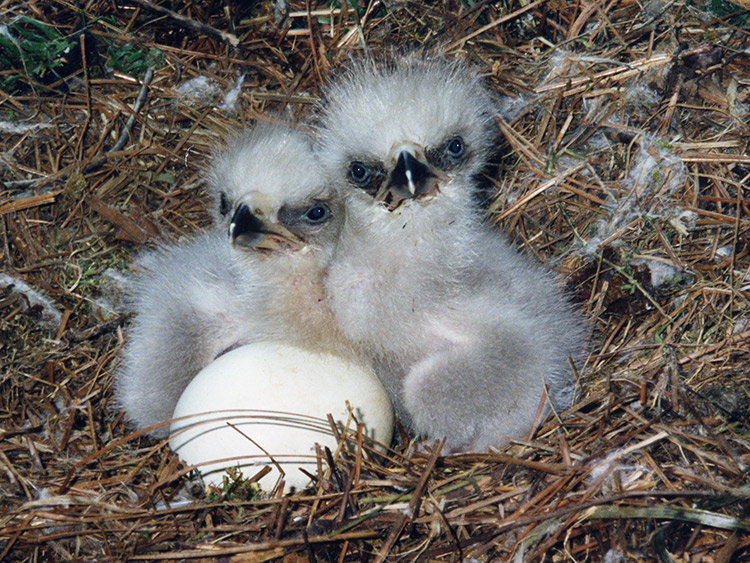 Two baby eagles snuggled against each other and an unhatched egg.

The video below shows an eaglet from the nest of non-releasable Bald Eagles Brave Heart & Honor. The second egg in the video was infertile.

August 24, 2009 — “Sergeant”, one of the triplets raised by eagle parents Franklin and Boni-Spae at the American Eagle Foundation was recently seen by a photographer photographing eagles in Elk Creek, Lake Erie, Erie, PA.  This eagle had been released from AEF’s Douglas Lake hack tower in East Tennessee (foothills of Great Smokies) on 8/3/09. A positive identification could be made because of the Patagial Tag (B9) which was attached to the eagle before its release. The Patagial Tag will stay on for some time, but probably will eventually work its way off or be torn off by the bird. 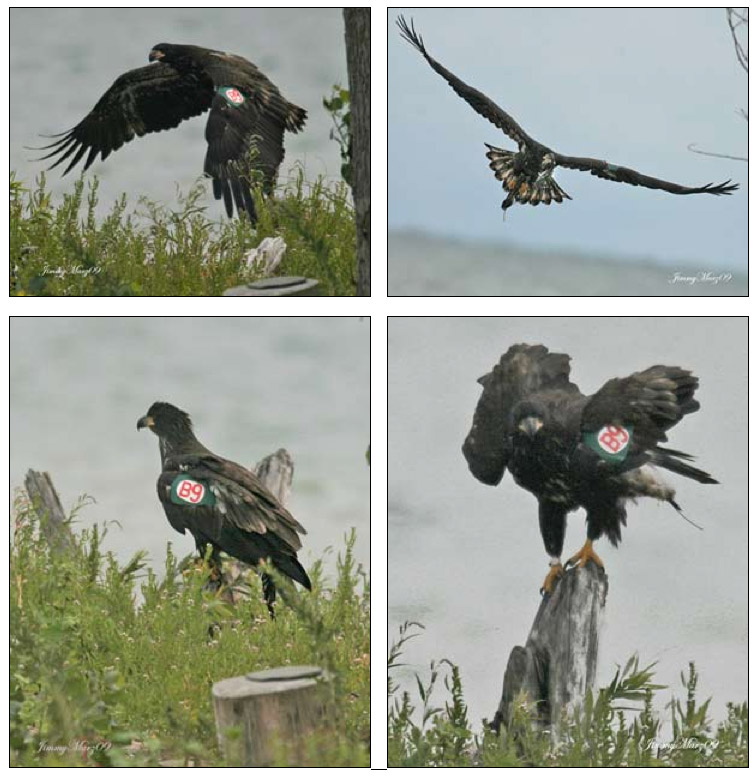 Sergeant was sighted in Elk Creek, Lake Erie, Erie, PA, and identified by his Patagial Tag, B9.

Non-releasable breeding Bald Eagles ‘Liberty’ and ‘Justice’ laid three infertile eggs in early April 2009 at the American Eagle Foundation’s United States Eagle Center at Dollywood. Three other infertile eggs were also laid by two other non-releasable bald eagle breeding pairs, for a total of six eggs that did not hatch this season.

Two other Bald Eagle breeding pairs hatched four eaglets (three by one pair and one by the other). At about 6 weeks of age, they were transferred to an artificial nesting tower (25-foot high hack tower) on Douglas Lake located about 25 miles NE of Pigeon Forge. After becoming oriented to the typical bald eagle habitat on the lake for a few weeks, they were released from the hack tower at about 12 to 13 weeks of age. They were then already adult-sized and capable of making their first flight.

One of the four bald eaglets was released on July 16 and the other three were released on August 3, 2009. All four birds had marker tags placed on their left wings. The wing tags had two 2-inch high orange digits placed on them, ending in the number “9”, which represents the 2009 release year.

The eaglet with wing tag “B9” was observed in good condition on August 23, 2009, on the shore of Lake Erie near Erie, Pennsylvania (see above photos). We urge anyone who sees a wing tag on an eagle to report the tag number, location, and other pertinent details to the U.S. Bird Banding Lab and their state fish and wildlife agency.

From 1992 through 2009, the AEF has hacked and released 101 young bald eagles. Forty-three had been captive-bred at AEF’s raptor facilities at Dollywood of Pigeon Forge, TN. After reaching four to five years of age, bald eagles usually find mates and tend to return to their nest in the general region of their maiden flights. However, if their mate has learned to fly in some other region, they may compromise on the nesting region they select.

Eaglets hacked in Tennessee have been known to nest as far away as northern Ohio. Therefore, the AEF’s hacking benefits sometimes spread over a broad region of the eastern United  States.

A golden eagle pair at AEF’s raptor center also hatched two eaglets in 2009, which will be released in Idaho.