The live eagle nest cam began operation at the American Eagle Foundation (AEF) of Pigeon Forge, TN on April 2, 2008, a few days after two eggs were laid. The non-releasable adult bald eagles, Liberty and Justice, take turns at sitting on the eggs, or they may move about just enough for you to see under them. You can then confirm the number of eggs, and when they begin to hatch.

Bald Eagles may have one to three eggs. Incubation requires about 35 days, provided one or both eggs are fertile. The eaglet(s) will remain in this nest until the eaglet(s) are approximately 5 weeks of age. The eaglet(s) will then be removed from the nest and transferred to a nearby artificial nest in a hack tower overlooking East Tennessee’s Douglas Lake. The young bird(s) become oriented to typical bald eagle habitat for several weeks before they’re released.

They may be joined by approximately 6 to 8 other captive-bred eaglets placed in four 8x8x8-foot hack cages, with possibly up to three eaglets in each cage. While in the cages, they will not be able to see humans as the source of their food to assure that they will later hunt for themselves, primarily for fish. They will be released into the wild when they are between 12 or 13 weeks of age after reaching full size, and will be able to fly for the first time. 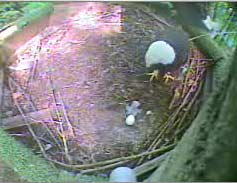 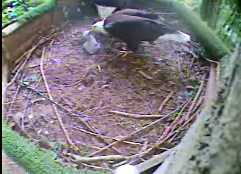 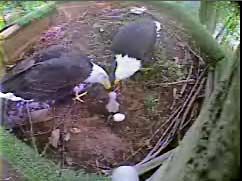 Around noon (CST) on Sunday (Mother’s Day), both parents feed their baby — (other egg remains unhatched) 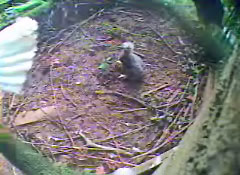 Our 3-week-old baby has grown a lot! If you’ve been watching, you’ve seen this little eaglet hopping, wiggling (sometimes his crop is so full from a recent dinner that he can’t quite get up), and stretching! You’ll also notice a definite change in color from fluffy white to a darkening gray. 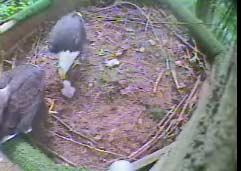 The second egg was removed from the nest today, “candled”, and determined to be infertile. The eaglet, which hatched by early morning of May 8, 2008, appears very healthy.

At 4 weeks of age, there’s more activity from the eaglet. He (she?) is very alert to what’s going on in the nest and is getting stronger every day — hopping, (sometimes falling over!) walking, exercising wings.

At 6 weeks of age, there’s a big change in the size and appearance of the young eaglet. Gone are the downy white feathers – the eaglet is more closely resembling its parents. Although the parents still feed their baby, the eaglet is also beginning to feed itself. 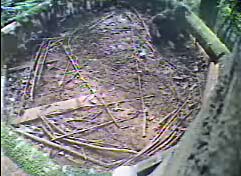 Our eaglet will be removed from the nest tomorrow, June 24, and transferred to a nearby artificial nest in a hack tower overlooking East Tennessee’s Douglas Lake. It will become oriented to typical bald eagle habitat for several weeks before it’s released. We hope you have enjoyed watching nesting activities as this eaglet has gone from “just-born” to now!

Information about the hack tower and eaglet release

AEF’s hack tower has a 1-way glass on the rear of the hack cages, whereby up to 12 eaglets can be observed in four 8x8x8-foot hack cages. Vertical bars, 4-inches apart, separate each side-by-side cage, mounted about 25 feet above ground and overlooking Douglas Lake. There are also small openings in the solid rear and side walls, whereby pictures may be taken of the eaglets inside the cages.

Hack tower release dates are based primarily on when the eaglets are first capable of flight. That is generally at about 12 weeks of age, which would be July 31, 2008 for the web cam eaglet. They may be stimulated to exercise their wings more when facing strong steady winds during their 8 – 12 week old period. In areas of strong steady winds, eaglets are typically strong enough for their first flights at about 10 weeks of age. They are judged ready to fly from the cage when they can fly in place, a few feet above their caged nest, for several seconds. If there is not much wind, they may not exercise their wings enough to be strong enough to fly until they are about 13 weeks age. Another important factor in their release is the attempt to release as many young eagles as feasible at the same time. AEF plans to release up to seven young bald eagles from its hack site on July 22, 2008, but the eagle cam eaglet may, or may not be, ready for release at that date, depending on its flight capability at slightly less than 11 weeks of age.

A blind is usually set up to the front right of the hack tower, allowing some pictures to be taken from that angle as the young eagles leave their cages. Some eagles immediately bolt out when the vertically barred front cages are remotely raised by rope and pulley. However, they typically hop outside the hack cages onto perch poles and, after a few minutes to an hour or more, after they get enough courage to do so, they fly to a nearby tree. Their first landings can be somewhat awkward because they have had no prior experience at landing while flying horizontally.

Immature eagles are vulnerable to threats during their first year of life, primarily because they are naive to a variety of dangers in the wild. Dangers are many and include: becoming entangled in thick vegetation (mostly when very young), being hit by vehicles while feeding on freshly dead road kills, colliding with powerlines, never learning to hunt for themselves, electrocution. A radio transmitter is placed on the tail feathers of each eaglet so that they can be found if they get in trouble before dispersing from the area, which is typically two to four weeks after release. Only about 50 percent survive their first year, whether hacked or from wild nests, after which about 90 percent survive each year. That leaves only about 36 percent surviving to five years of age, when many will find a mate and produce their first young. Bald eagles have been known to live as much as 39 years in the wild and over 50 years in captivity, where there is good veterinary care. If an eagle is capable of surviving in the wild, it must be released into the wild.

Left to right: Eaglets are readied to be hoisted up to the tower; on the way up; release of eaglets.

Prior Eaglets Produced & Raised By Liberty and Justice

In 2006, apparent weather damage caused the collapse of the nest of Liberty and Justice, destroying three eggs that year.

In 2007, an infertile egg in the nest of Liberty and Justice was replaced by two eaglets from another of AEF’s captive breeding pairs, Bonispae and Franklin. Two broken egg shells were placed in the nest to make the “miraculous hatch” appear to be more convincing to Liberty and Justice, and their two adopted eaglets were reared successfully for release into the wild.

From 1992 through 2007, the AEF has released a total of 87 mostly captive-bred bald eagles from that hack site. Bald eagles tend to return to the general region where they first learn to fly to nest after they reach sexual maturity at 4 to 5 years age. However, in case their future choices of life-time mates had learned to fly in some distant area(s), they may need to compromise on their future nesting sites.