Eagle Challenger a Soaring Success during Anthem at AFC Championship

Pigeon Forge, Tenn – You may think Peyton Manning or Mark Sanchez were the stars of the AFC Championship game, but another undeniable star shone brightly that Sunday…the celebrity Bald Eagle Challenger.

The majestic “human-socialized” bird joined 2007 American Idol winner Jordin Sparks and over a hundred American soldiers holding a field-sized U.S. flag during the singing of the Star Spangled Banner. He didn’t squander one moment of his 50 seconds before the sold-out crowd at Lucas Oil Stadium and throngs of viewers on national CBS television. 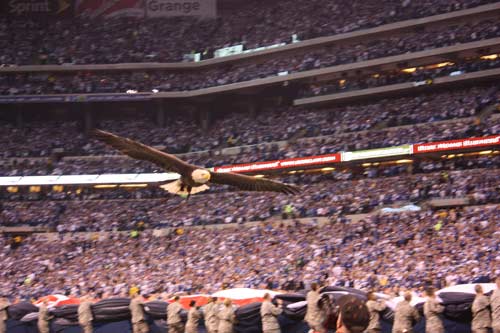 Challenger soars over the crowd to thunderous applause and cheers. 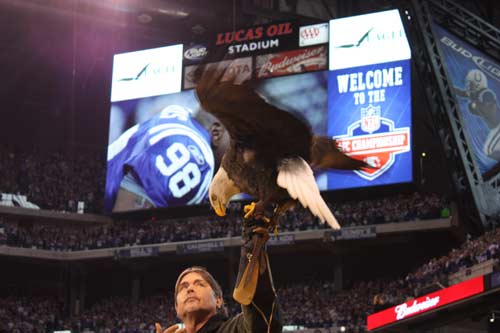 Challenger executes a perfect landing on the arm of handler Al Cecere.

When asked by a number of sports fans if Challenger is going to Super Bowl XLIV, Cecere answered: “As it stands right now, we’ve not been invited, but would certainly jump at the chance to represent America and salute our brave military. We’ve offered our services to the bowl organizers in previous years without success.”

Besides inspiring and wowing people with his special soaring talents, Challenger doubles as an educational ambassador for his species, having helped generate substantial public awareness about the plight of the bald eagle during the time it was on the Endangered Species List.

“Our mission is to draw attention to America’s important conservation and environmental issues. challenger’s incredible flying demonstrations at various events are very effective in getting the message out,” said Cecere.

The popular male bird was blown from his wild Louisiana nest as a baby in a storm. He was initially hand-raised by a caring person who rescued him and then released into the wild twice. Nevertheless, he never learned to hunt for food due to accidental human imprinting and was declared non-releasable by federal and state wildlife officials.

For the past 20 years, Challenger has been under the care of the non-profit American Eagle Foundation (www.eagles.org), which is headquartered at Dolly Parton’s Dollywood family entertainment park in Pigeon Forge, TN. The conservation group is celebrating its 25th Anniversary this year.

“Maybe this eagle Super Star from Cajun country will be granted the opportunity to fly at football’s premier world championship game this time around,” said Cecere. “He’s definitely a proven pro and is no stranger to Miami’s Sun Life (Dolphin) Stadium where the big event will be held.”

Challenger’s handlers are hopeful the phone will soon ring. But, meanwhile, the regal bird – loved by millions – continues to work out daily for trout and salmon treats. 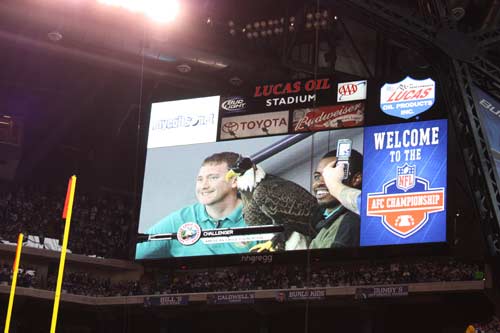 Kevin Buchanan and Rob West wait to release Challenger during the National Anthem at the AFC Championship Game. 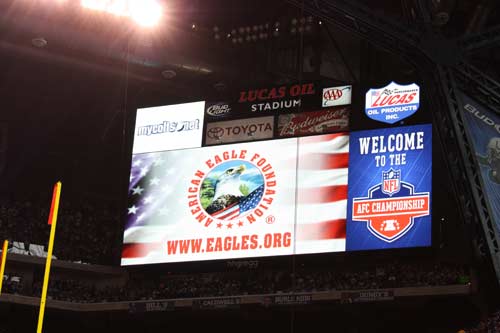 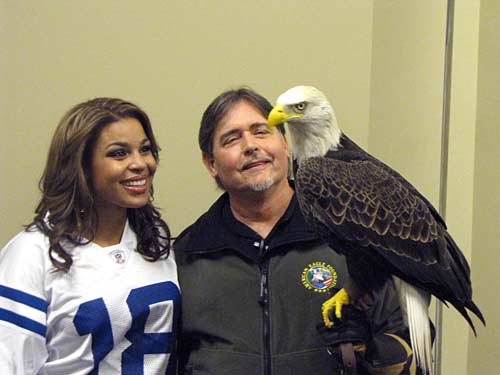 More information about Challenger, can be obtained from the American Eagle Foundation
at 865-256-0372, Al@eagles.org, or by visiting WWW.EAGLES.ORG