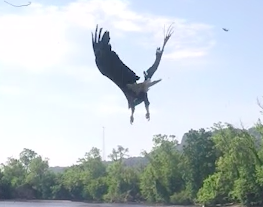 [/av_textblock] [av_textblock size=” font_color=” color=” custom_class=” admin_preview_bg=”] May 18, 2017
[/av_textblock] [av_video src=’https://youtu.be/ZNNH-Rhbgfw’ format=’16-9′ width=’16’ height=’9′ custom_class=”] [av_textblock size=” font_color=” color=” custom_class=” admin_preview_bg=”] On April 3, 2017 Wayne Micheli, a manager at the Riverfront Seafood Company restaurant in Kingsport, TN, caught word from guests that there was a bald eagle outside of the restaurant. The business is located on the edge of a beautiful strip of the Holston River and Micheli recalls that eagles are frequent visitors. Seeing an opportunity to record a video of the majestic creature, he went outside to watch it, not knowing the bit of drama that was about to occur. The eagle was walking along the river bank towards a Canadian goose nest full of eggs. Minutes later, the eagle was flogged by the parent geese, who were soon joined by several other geese nearby. According to Micheli, the geese chased the eagle into the river and one at a time they dive-bombed it, pecking at it and pulling at its feathers. In an effort to help the bird out Micheli used a broom to chase away some of geese, and the eagle was able to make it to shore.

The eagle managed to fly a few yards down the river, coming to a landing on a concrete bridge pillar nearby. Micheli contacted the Tennessee Wildlife Resource Agency (TWRA) and expressed his concern about the eagle’s welfare. At first, it was believed that the eagle might just be waterlogged, and unable to fly because it was soaking wet from being in the river. However, the following morning Micheli found the eagle behind a nearby house, still on the ground. At this point TWRA officers Caleb Marshall and Brian Kegley were dispatched to the scene, and subsequently captured the bird. It was transported to the University of Tennessee Veterinary Medical Center.

Upon arriving at the veterinary office, the eagle got some good news! It had suffered no major injuries, just some minor soft tissue damage, lost feathers, and a battered pride. All that it needed was a few good meals, a bit of TLC, and a safe, dry place to recuperate for a few weeks. The bird was transferred to the American Eagle Foundation, where staff affectionately nicknamed it “Canada.” Canada spent a short period of time indoors in the AEF’s rehabilitation facility then quickly graduated to the AEF’s flight run aviary, a long outdoor aviary designed to allow rehabilitated birds to rebuild strength and muscle before being released back into the wild. Canada recuperated in the flight run for a couple of weeks, where he/she proved to be a bit of a particular eater – fish only please! Soon he/she was easily able to fly the length of the aviary and was ready to be released back into the wild!

On May 17, 2017 AEF staff traveled from Pigeon Forge to Kingsport in order to release the eagle in the exact some location from which it had been rescued. Just prior to the release the eagle was banded and important measurements were taken. While no blood tests were done to confirm the bird’s sex, based on the measurements taken that morning AEF’s veterinary technician Nancy Zagaya announced that the eagle was likely a female bird.
It was on this day that the bird who had been nicknamed “Canada” received her proper name. At the request of Rack Cross, the vice president of the Kingsport Birding Group, she was named Chief. The name is significant as the land where the eagle was rescued was historically a sacred meeting ground of the tribes of the Cherokee nation, and was known as a place where many peace treaties were signed.

Chief was released that morning at approximately 10:30 am while many of the people involved in her rescue looked on. She made a nice, strong flight down the river and was seen by many attending the release flying back down the river again later that morning. We can only hope that through all of this she learned a valuable lesson-never mess with nesting geese!