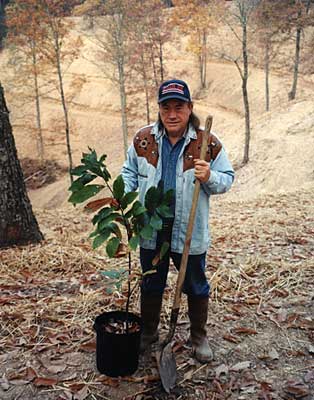 Owens, uncle to Dolly Parton, has championed the cause of protecting the natural environment at Dollywood since 1986. During that time, he has taken it upon himself to plant about 70,000 trees on the theme park property.

Owens, born in 1935, is a strong believer that we can reclaim the land with trees. As a 16-year-old boy, he became fascinated by the unusual Chestnut Tree stories he heard told by his dad and Dolly’s dad — including how a big old hollow Chestnut Tree was used by one of Dolly’s uncles as a wedding suite and temporary home. Thirty years ago, he was inspired by the book, Tree Crops, a Permanent Agriculture by J. Russell Smith. It convinced him that he could give something very precious back to Tennessee and the mountain regions of this country. He sees his work to restore the American Chestnut Tree not only as a way to help preserve America’s heritage, but also as a means to provide future monetary gain for mountain folks. 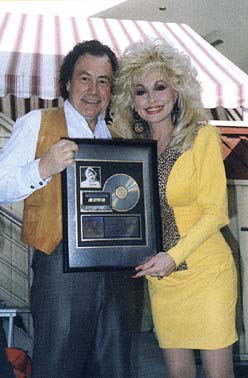 He has written over 800 songs, including an environmental awareness song titled Cactus Clyde, and is a regular Dollywood performer in the Kin Folk Band at the Back Porch Theater.

More About The Chestnut Tree

The following paragraphs have been taken from Where There be Mountains, There be Chestnuts, a publication of the American Chestnut Foundation.

“Not too long ago, the American chestnut was one of the most important trees of forests from Main south to Georgia, from the Piedmont west to the Ohio valley. In the heart of its range only a few generations ago, a count of trees would have turned up one chestnut for every four oaks, birches, maples, and other hardwoods. Many of the dry ridgetops of the central Appalachians were so thoroughly crowded with chestnut that, in early summer, when their canopies were filled with creamy-white flowers, the mountains appeared snow-capped.

And the trees could be giants. In virgin forests throughout their range, mature chestnuts averaged up to five feet in diameter and up to one hundred feet tall.

Native wildlife from birds to bears, squirrels to deer, depended on the tree’s abundant crops of nutritious nuts. And chestnut was a central part of eastern rural economies. As winter came on, attics were often stacked to the rafters with flour bags full of the glossy, dark brown nuts. … And what wasn’t consumed was sold. Chestnut was an important cash crop for many Appalachian families.

The tree was also one of the best for timber. It grew straight and often branch-free for up to fifty feet. Loggers tell of loading entire railroad cars with boards cut from just one tree. Straight-grained, lighter in weight than oak and more easily worked, chestnut was as rot resistant as redwood. It was used for virtually everything — telegraphy poles, railroad ties, shingles, paneling, fine furniture, musical instruments, even pulp and plywood.

Then the chestnut blight struck. First discovered in 1904 in New York City, the lethal fungus — an Asian organism to which our native chestnuts had very little resistance — spread quickly. In its wake it left only dead and dying stems. By 1950, except for the shrublike sprouts the species continually produces (and which also quickly become infected), the keystone species on some none million acres of eastern forests had disappeared.

For decades, plant pathologists and breeders tried to create a blight-resistant tree by crossing our own species with the resistant Chinese tree, but always with unsatisfactory results. Now, advances in our understanding of genetics have shown us where those early researchers went wrong. more importantly, we now know what path we must take to successfully breed an American chestnut with resistance to this deadly invader. We now know we can have this precious tree back.”
[/av_textblock] [av_textblock size=” font_color=” color=” id=” custom_class=” av-medium-font-size=” av-small-font-size=” av-mini-font-size=” av_uid=’av-k3teuu3y’ admin_preview_bg=”]

Video from CBS News December 5, 2019 about a possible way to bring back the American Chestnut tree.  (Note: Commercial precedes video)