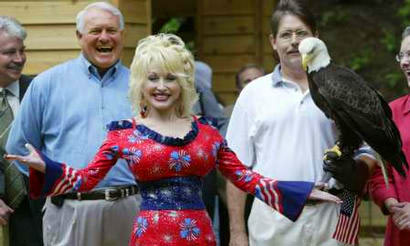 Entertainer Dolly Parton jokes alongside Challenger, a 15-year-old American Bald Eagle at the National Zoo in Washington, July 2, 2003. Parton, a contributor to the preservation of the once-endangered symbol of Amercian freedom, was present to launch the zoo’s pre-July 4 Independence Day Bald Eagle Refuge Exhibit to celebrate the national bird and the 100th anniversary of the founding of the National Wildlife Refuge System. Challenger is cared for by the non-profit American Eagle Foundation, headquarted at Dollywood in Pigeon Forge, TN. Deputy Interior Secretary Steve Griles (left) and American Eagle Foundation President Al Cecere (right). — REUTERS/Jason Reed

The non-profit eagle preservation organization (www.eagles.org), headquartered at and sponsored by the Dollywood entertainment park in Pigeon Forge, Tennessee, has donated two non-releasable Bald Eagles named “Sam” (female) and “Tioga” (male) to the eagle exhibit. The grand opening of the exhibit celebrates the 100th Anniversary of the National Wildlife Refuge System, which the U.S. Department of the Interior and its various agencies are highlighting throughout 2003. It offers a close-up view of American Bald Eagles while educating visitors, especially children, about the importance of the National Wildlife Refuge System.

In addition to participating as a guest speaker and in the ribbon cutting ceremony, Ms. Parton was given the U.S. Fish & Wildlife Service “Partnership Award” in recognition of her outstanding support for Bald Eagle conservation and the National Wildlife Refuge System. Ms. Parton’s Dollywood entertainment park has been an official sponsor of the non-profit American Eagle Foundation for the past 13 years. The park has donated several million dollars to support the Foundation’s public education and eagle care/recovery efforts.

“Challenger”, the Foundation’s famous trained educational eagle was on hand to support the event. “Bald Eagles have symbolized our country’s freedom and heritage for over 220 years, said Parton, “We are excited and proud that Dollywood and the American Eagle Foundation are donating these two majestic birds to the National Zoo and can play a special role in dedicating the new eagle exhibit celebrating America’s wildlife refuge system.”

“It’s a great honor to give these magnificent birds a special home in our nation’s Capitol where they can symbolically represent America’s ideals to millions of visitors from around the world,” said Al Cecere, President of the American Eagle Foundation. “These impressive national birds will serve as important high-profile educational ambassadors.”

Housed in a natural setting surrounded by nearly invisible netting, the bald eagles will be easily seen by visitors from an adjacent viewing blind. The exhibit is situated in the heart of the National Zoo on the Valley Trail, which features North American wildlife, including wolves, California sea lions and river otters.

The flightless eagles were rescued from the wild, and are non-releasable due to permanent wing disabilities. They were recently removed from the Foundation’s “Eagle Mountain Sanctuary” aviary at Dollywood where the pair has been on display to the park’s guests for a number of years. The aviary features the largest presentation of non-releasable Bald Eagles in the world.

The birds were given physical check-ups by East Tennessee veterinarians Dr. Mike Jones, Dr. Dinny Ryan and Dr. Kimba Marshall before leaving Tennessee, and were taken to Washington by American Eagle Foundation staff members. They were placed in the new exhibit by zoo staff on an earlier date in order to acclimate to their new home and habitat prior to today’s opening.

To cap the week of patriotism, Dolly Parton will headline this year’s A Capitol Fourth 2003 concert from the U.S. Capitol which airs live on PBS on Friday, July 4, 2003 from 8:00 to 9:30 p.m. EST. A Capitol Fourth 2003 will feature a brilliant evening of musical entertainment topped by a dazzling display of fireworks over the Washington Monument.

The concert, hosted by veteran actor Barry Bostwick, will include performances by some of the country’s best-known and award-winning musical artists including James Ingram, The Chieftains, Kristin Chenoweth, Earl Scruggs, Jerry Douglas, and Craig Bierko, among many others. Leading the internationally renowned National Symphony Orchestra is America’s premier pops conductor, Erich Kunzel. Ms. Parton will perform such favorites as “9 to 5,” “Light of a Clear Blue Morning,” and “When Johnny Comes Marching Home.”

Also, the Foundation’s trained non-releasable Bald Eagles “Challenger” and “America” will participate in the filming of a new IMAX film for the Smithsonian called We The People on Thursday, July 3, 2003. The film will educate viewers about the U.S.A.’s founding democratic documents.

Founded in 1985, the non-profit American Eagle Foundation (www.eagles.org) headquartered at Dolly Parton’s Dollywood entertainment park in Pigeon Forge, Tennessee, has become a non-governmental leader in eagle conservation over the past seventeen years. Since 1991, it has traveled coast-to-coast conducting numerous public education programs with trained non-releasable eagles and other birds of prey. The Foundation has presented well over 9,000 educational free-flight birds of prey shows. It is federally licensed to provide care to over 70 birds of prey daily, including about 35 eagles. These birds are non-releasable due to permanent physical disabilities or accidental imprinting on humans. Many of the eagles residing at the Foundation’s bird facility have successfully reproduced in captivity. The organization operates the largest Bald Eagle breeding program in the world, and has released dozens of captive-hatched eaglets into the foothills of the Great Smoky Mountains area and other places. It also has been a party to releasing hundreds of other eaglets into the wilds in cooperation with the U.S. Fish & Wildlife Service and Tennessee Wildlife Resources Agency, and has supported numerous public education and eagle care/recovery projects in various States. Since 1990, the Dollywood entertainment park has been the primary corporate sponsor of the Foundation.