The American Eagle Foundation and the D.C. Eagle Cam partners are looking for creative and symbolic names for “DC2” and “DC3,” the adorable bald eaglets that recently hatched in a wild nest at the U.S. National Arboretum in Washington, DC. The eaglets are being cared for and raised by their parents “Mr President” and “The First Lady.” Cam viewers and fans can suggest names for the two eaglets via a “Name the Nestlings” social media campaign using hashtags #dceaglecam and #namethenestlings. Watch LIVE 24/7 on dceaglecam.eagles.org. Photo © American Eagle Foundation / www.eagles.org 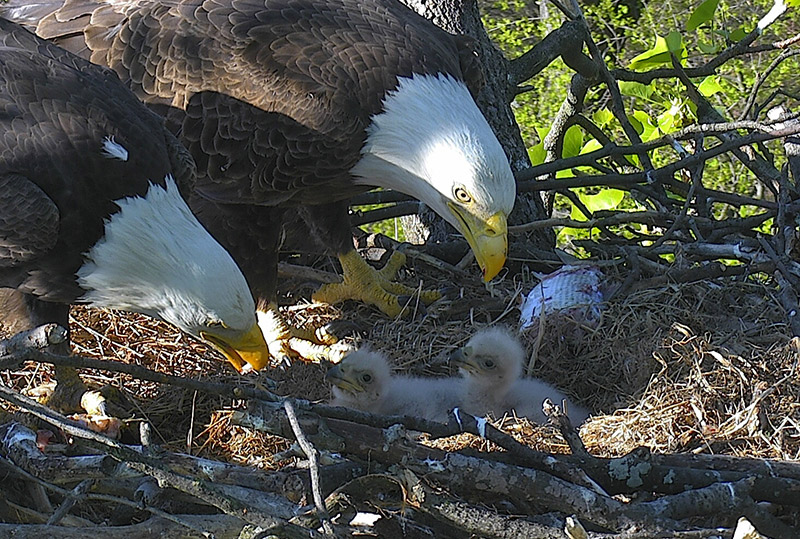 WASHINGTON— Since hatching, the adorable bald eaglets that reside inside a nest at the U.S. National Arboretum have been referred to as “DC2” and “DC3,” as these are the second and third eaglets raised by parents “Mr. President” and “The First Lady” at this nest location. Now, however, the D.C. Eagle Cam partners and cooperators (American Eagle Foundation, U.S. Department of Agriculture, D.C. Department of Energy & Environment, and U.S. Fish & Wildlife Service) are looking for two creative and symbolic names for these eaglets that live up to the names of their parents.

The American Eagle Foundation (which has been live-streaming the eagle activity from this nest 24/7 on www.eagles.org) has announced a “Name the Nestlings” social media campaign. This campaign provides nest cam fans from around the globe with the opportunity to suggest fitting names for these two eaglets via Twitter, Instagram or Facebook.

How to Participate on Twitter and Instagram: Use hashtags #dceaglecam & #namethenestlings along with your eaglet name suggestions. Note: If Instagram or Twitter profiles are set to “private,” name suggestions may not be detected and tracked.

How to Participate on Facebook: Visit the Facebook fan page of the American Eagle Foundation and/or the DC Department of Energy & Environment and share your name suggestions there using hashtags #dceaglecam and #namethenestlings.

Viewers are encouraged to suggest names that are gender-neutral or names that can be cleverly altered to fit either a male or a female (as the sex of these two eaglets may not be determined until a later date).

The two final names will be announced at a public event at the U.S. National Arboretum on April 26, 2016.

About the DC Eagle Cam Project

The DC Eagle Cam project is the result of a cooperative effort between several partners. After the eagle pair left their nest site in August 2015 for their annual migration, the American Eagle Foundation traveled to D.C. to install cameras, infrared lighting, and other related equipment in-and-around the nest tree with the help of volunteers and experienced tree climbers. The U.S. National Arboretum (which is directed by the USDA’s Agricultural Research Service) ran a half-mile of fiber optic cable to the cameras’ ground control station to connect the cameras to the internet. The entire system is powered by a large mobile solar array (containing several deep cycle batteries) that was designed and built by students and staff from Alfred State College, SUNY College of Technology and was partially funded by the Department of Energy and Environment. USNA has implemented a backup generator that will kick in if prolonged inclement weather causes the solar array to provide insufficient power to the system. The U.S. Fish and Wildlife Service has also been a cooperator in the project. The high-definition streaming of the cameras is being hosted and funded by the American Eagle Foundation on dceaglecam.eagles.org / www.eagles.org.