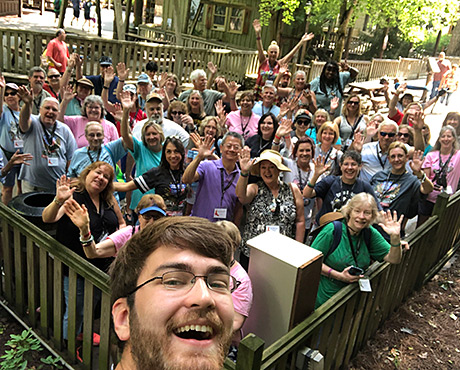 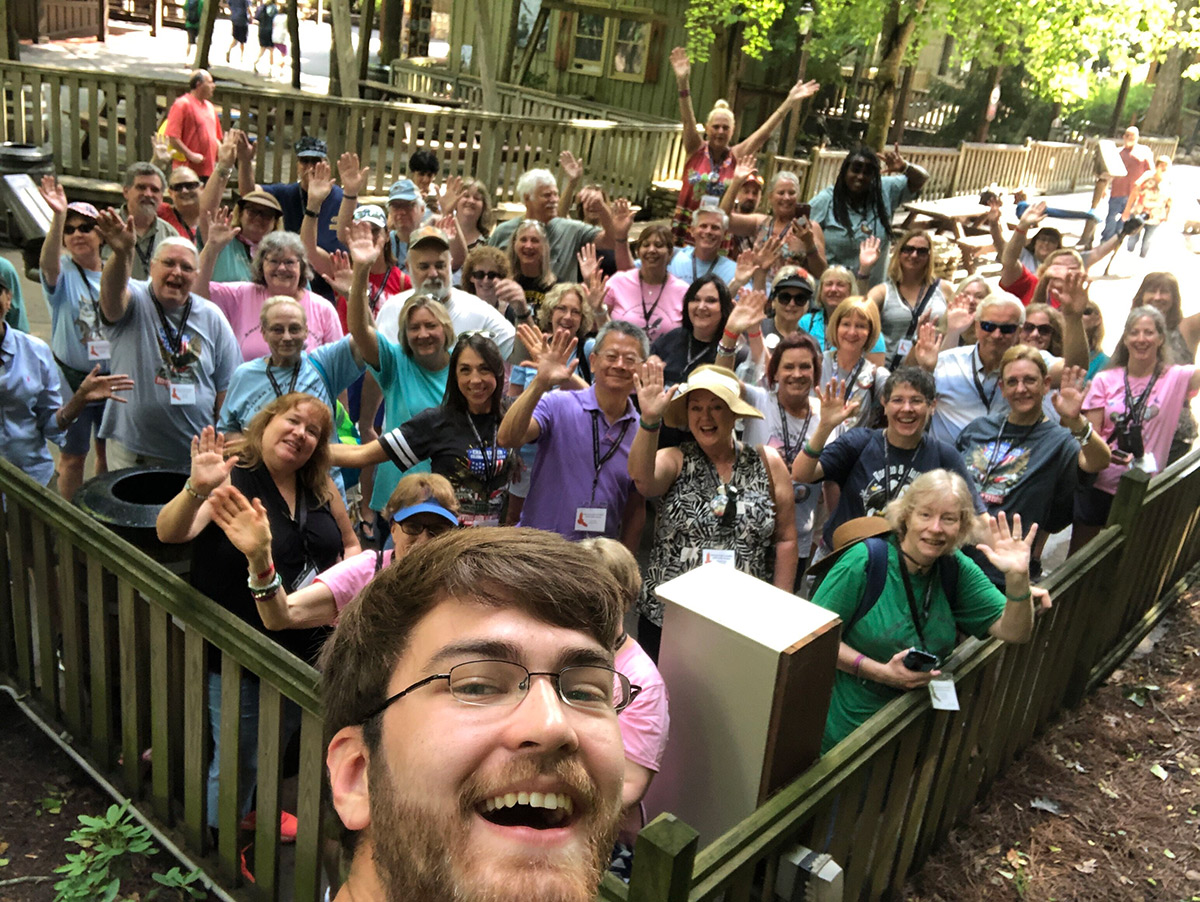 The Chatter Wave at Dollywood. Click image for high-res version.

This year, Chatter Reunion was held on June 20-22, 2019 at Pigeon Forge, TN—and hats are off to everyone at AEF who worked so hard to make sure everyone had a great time. 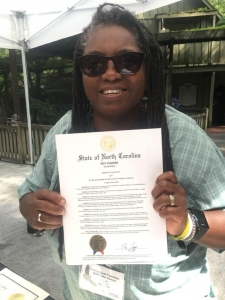 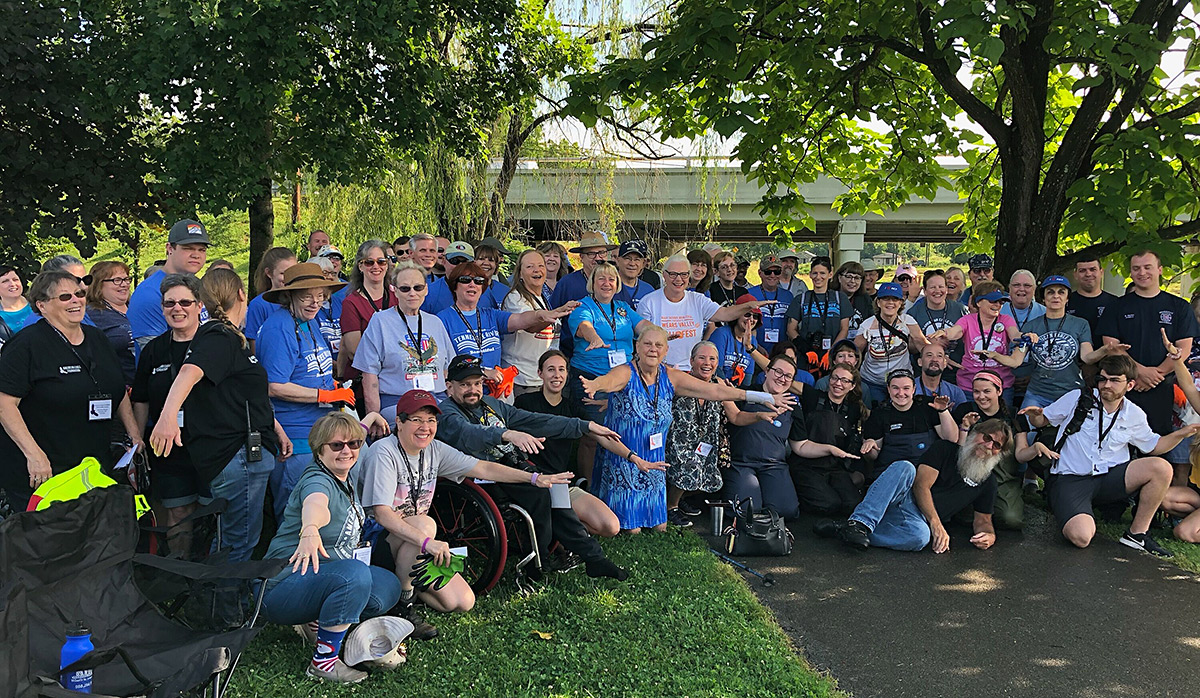 Beginning with the 2018 Chatter Reunion, a conservation initiative to help protect eagles and other wildlife has been part of the scheduled activities in which Chatters can participate. This year, AEF partnered with Keep Sevier Beautiful and Keep Tennessee River Beautiful (affiliates of Keep America Beautiful) to host a river cleanup along the banks of the Little Pigeon River in Sevierville.

Thanks to these organizations that helped with the river cleanup!

After a very busy day on the river, a beautiful countryside location in Sevierville was chosen for this year’s dinner & raffle. A gray weathered wood barn – beautifully renovated – was the scene of a delicious dinner and a fun-filled raffle. Items featured in the raffle included

Lots of other terrific items were also part of the raffle. Challenger made an appearance, and a good time was had by all.

Chatters gathered at sunrise at Douglas Lake and were transported in vans to the AEF Hack Tower where they experienced a memory to last a lifetime as they watched a young eaglet fly free. AEF Educational Nest Cam Coordinator Crystal Slusher explained to the chatters that the eaglet had been given the name “Parker’s Hope” in memory of two volunteers, Parker Allen (aka paegghead) and Hope Reed (aka birdbrain56). AEF staff thanked all volunteers for their support and Spencer Williams offered a prayer for the safety of the young eaglet. When the bar was raised on his compartment in the Hack Tower, Parker’s Hope flew after about 30 seconds, and made a strong first flight, landing safely in the trees. He wears patagial wing tag H19. 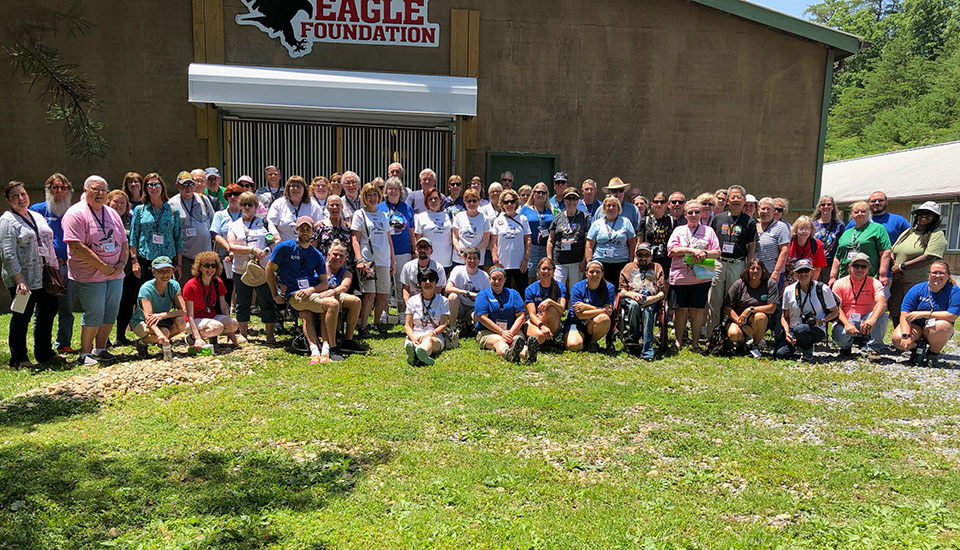 After watching “Parker’s Hope” fly free, Chatters toured the barn to see birds of prey that have found a home at the American Eagle Foundation, visited the flight areas and weathering yards, learned about the responsibilities of Avian Care Specialists, and checked out the AEF merchandise for sale. The afternoon activities were non-stop!

You would have to look long and hard to find a more ardent supporter of the American Eagle Foundation than James Rogers! A man of amazing talent, James wrote those very famous eagle songs (When Challenger Flies, Save the Eagle, Fly Eagle Fly) that celebrated our nation’s living symbol. He also facilitated the introductions that enabled the AEF to begin a partnership with Dollywood, and now he is a member of AEF’s Board of Directors. In the past, James has provided a wonderful show for the Chatters who come from far and near, and this year they were again treated to entertainment that only James can provide.

Dollywood is home to the American Eagle Foundation’s Wings of America birds of prey show, located in a spacious open-air theater. There, our non-releasable trained eagles, hawks, falcons, owls, and vultures perform dramatic free flights and entertain the audience with their skills and unique personalities, while Tuck is there to take your money at the end of the show!  Skilled AEF staff—Beth Parker, Brad Skinner, Carly Hamilton and others—are there to guide the birds through their performances, share the bird’s individual story with the audience, and give professional insights into the different species starring in the show. James Rogers once again was a featured performer on the Wings of America stage, and delighted the audience with his energy and talent…. reminding everyone why the James Rogers & Company show at Dollywood earned the title of “the number one most attended show in the Smokies.”

On June 20, 2019, Laura Sterbens and Challenger appeared on Fox and Friends in New York to talk about American Eagle Day and to announce a national habitat cleanup to take place June 20, 2020. This will be an opportunity for groups and organizations all across our nation to commit to a specific conservation effort on American Eagle Day. To help facilitate this initiative, AEF has decided to forego our annual Chatter Reunion in 2020 so that our Chatters can focus on being personally involved in a cleanup project in their area. If your group or organization would like to sponsor a cleanup, please check out our Call To Action page. Our goal is to have a participating youth organization or club in every state commit to cleaning up our nation’s waterways. It could be a park, a neighborhood, a river, lake or stream – you choose! We encourage you to make it fun and make it yours…just get out and clean up for American Eagle Day 2020!