After Challenger the Eagle’s annual molt this summer, he went on an educational tour like never before. He performed and appeared at 18 major events and meetings between August and November! This blog post covers all of the non-football appearances Challenger made during this period. View Challenger’s Football Appearances.

Below are highlight videos and photos of some of these appearances that Challenger made during September, October, and November, 2016.

At the end of the Summer, the American Eagle Foundation had the honor of flying Challenger the Eagle at the Jackson Dinsdale Art Center dedication ceremony at Hastings College in Nebraska. This art center was built in honor of a very special young man who passed away two years ago while studying in the art program. Our hearts go out to the friends and family of Jackson Dinsdale we thank them for allowing us to be a part of the legacy of this school.

American Eagle Day Meeting with Speaker of the House

The AEF team traveled to Washington DC to receive an award from the Agricultural Research Services for the AEF’s dedication to the DC Eagle Cam project on September 7th, and then to visit Speaker of the House Paul Ryan to speak to him about the AEF’s ongoing American Eagle Day efforts. Afterwards we headed directly to NYC to appear on Fox & Friends in honor of the 9/11 15-year anniversary. 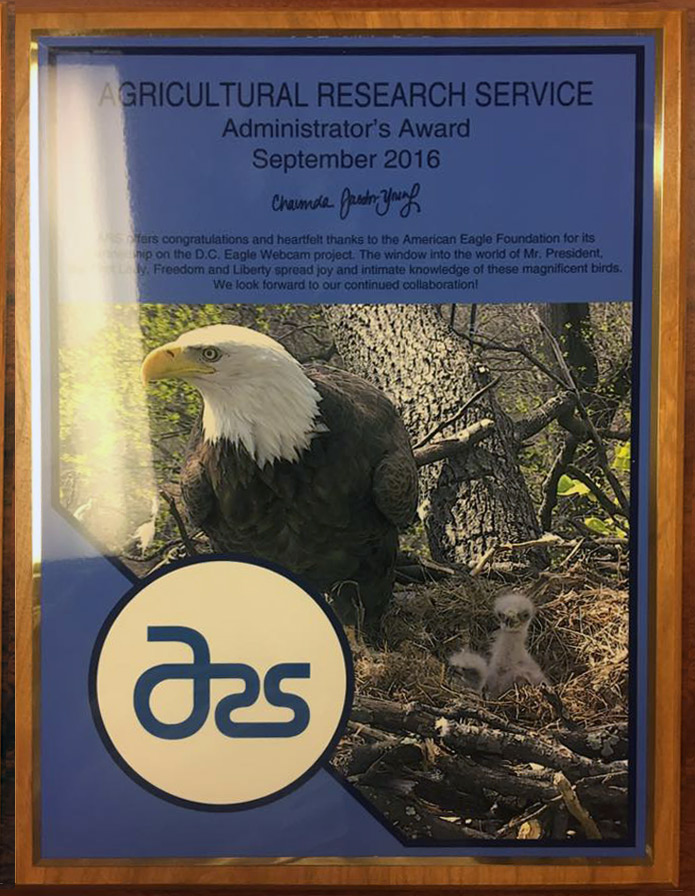 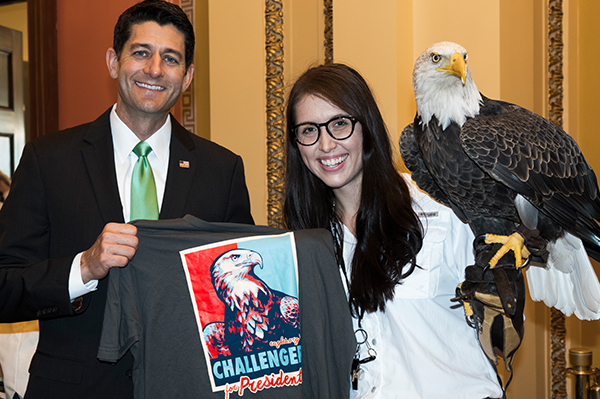 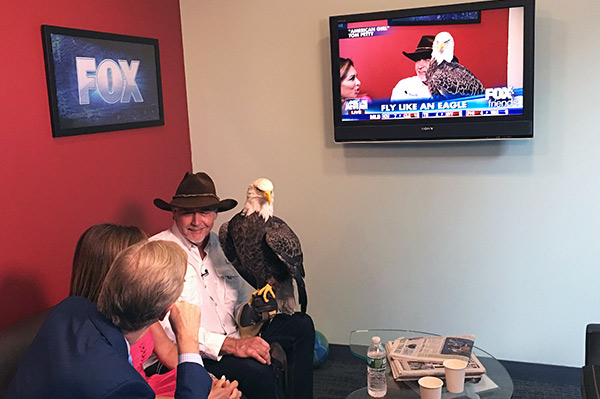 Challenger and the AEF team were commissioned by a private donor to travel to Saginaw, Michigan to perform educational programs for the Midland Academy school and the Aleda E. Lutz VA Medical Center.

The students at Midland were in awe of an eagle making an appearance at their school! Jason Christianson, chief of volunteer service at the VA Center, stated with a grin, “To see one actually fly right over your head is pretty amazing…We are the Veteran’s Affair’s center — Marines, Army, Navy, Coast Guard — we all fight for the flag and the eagle is a symbol of America. It is extremely fitting to have him here today.” 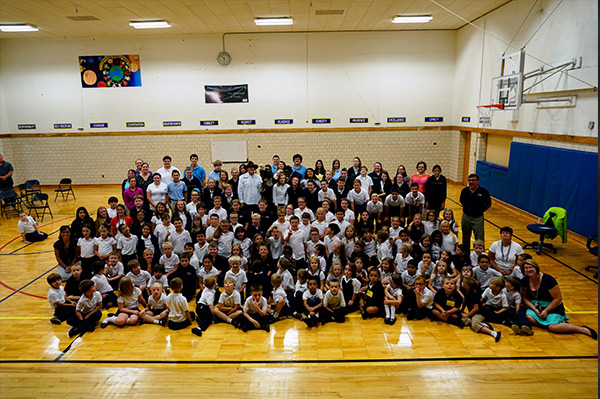 The American Eagle Foundation participated in several Field & Stream grand openings, which were held during September and October:

At these grand openings, which are attended by so many people who love the outdoors, a wonderful opportunity is provided to the AEF to share information with the audience about the catastrophic effects lead poisoning has on Bald Eagles.

And, to restate it here, for all you hunters and fishermen out there, always remember that by using alternatives to lead ammunition and lead fishing tackle, you can directly protect Bald Eagles from lethal lead poisoning, which happens when the Eagles feed on fish and dead carcasses that contain lead shot fragments or lead fishing tackle. 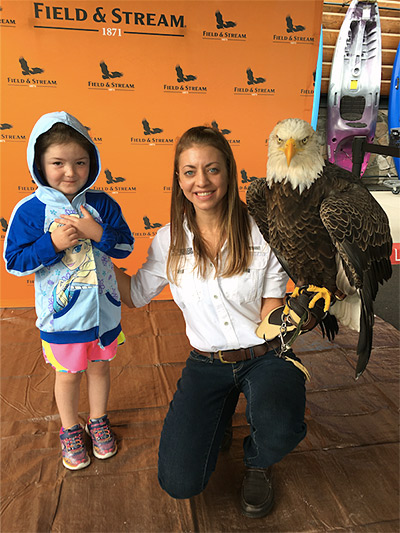 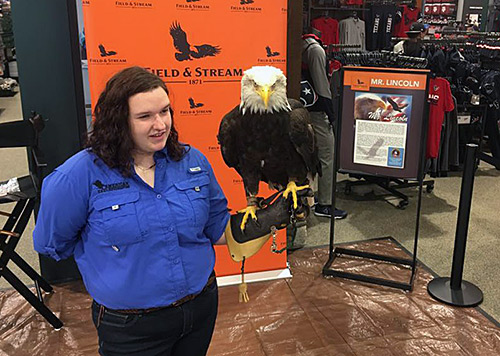 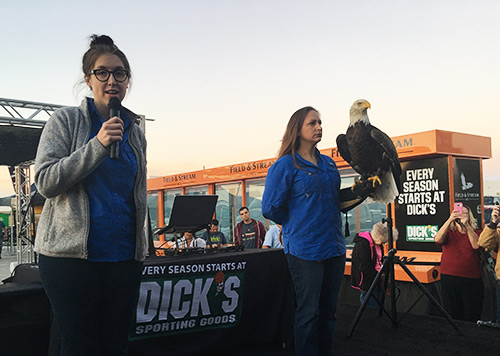 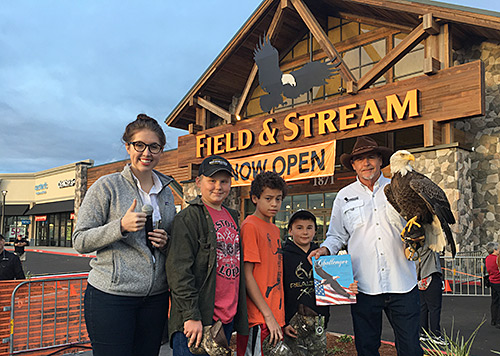 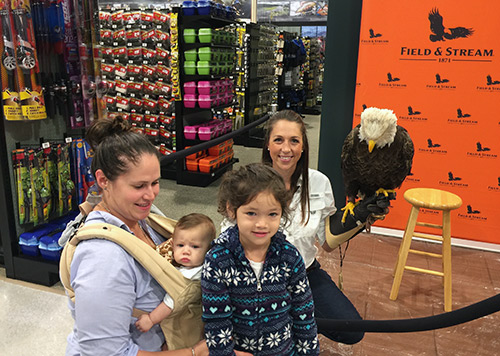 On October 5th, Challenger and the American Eagle Foundation had the honor of participating in a University of Nebraska Omaha campus dedication ceremony for Walter Scott. Walter Scott has been a long-time lover of eagles and supporter of the AEF. Unfortunately, Scott was in the hospital during the event, but we were able to take Challenger to his private hospital room to visit him.

While traveling in Omaha, Nebraska on November 5th, the AEF crew and Challenger visited the children who live at Boys Town. There you will find the world’s largest ball of stamps. Challenger could not miss this unique photo opportunity!

On October 12, Challenger flew at the Pinnacle Bancorp Annual Meeting in Denver, Colorado. The Anthem was performed by AEF eagle handler Julia Cecere, whose many talents also include creating the videos on this page! 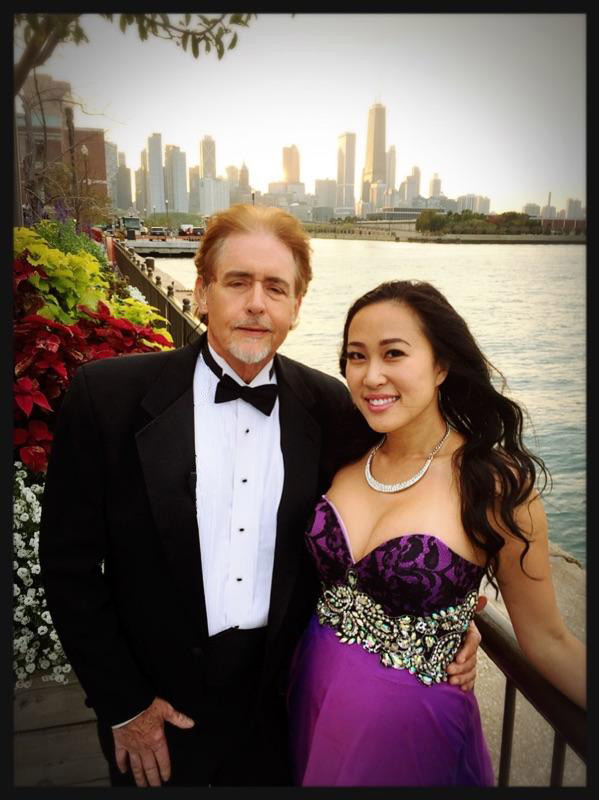 Al and Nhi Cecere at Gala

On October 14 Challenger The Eagle flew magnificently at The Great Gateway fundraising gala for cancer research! What a phenomenal production! It was such an honor to be involved in this event. The National Anthem was performed beautifully by Kelly Levesque.

Challenger wrapped up his fall appearances by participating in Charlie Daniels Volunteer Jam, which raised money for his Journey Home project for wounded soldiers. 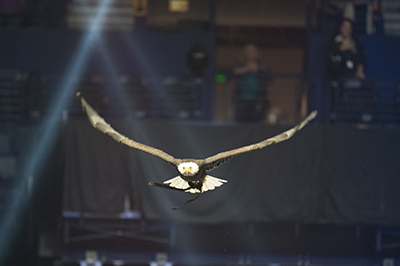 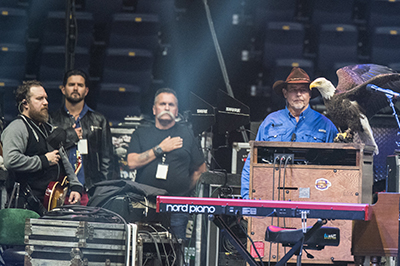 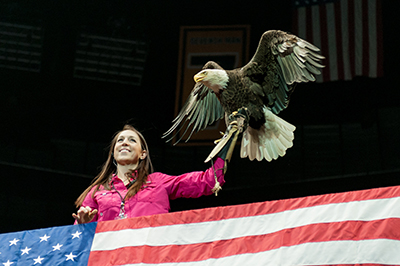 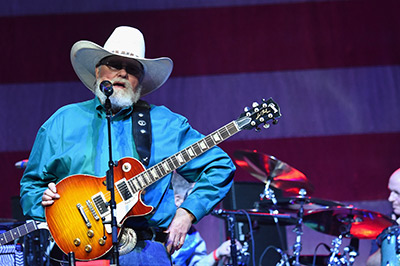