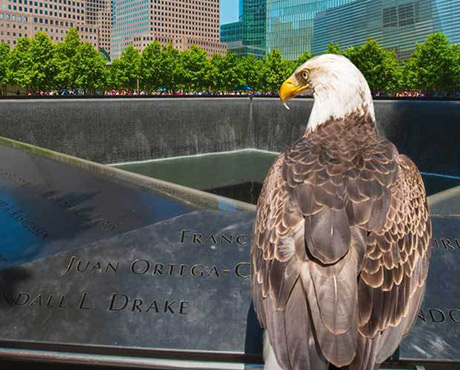 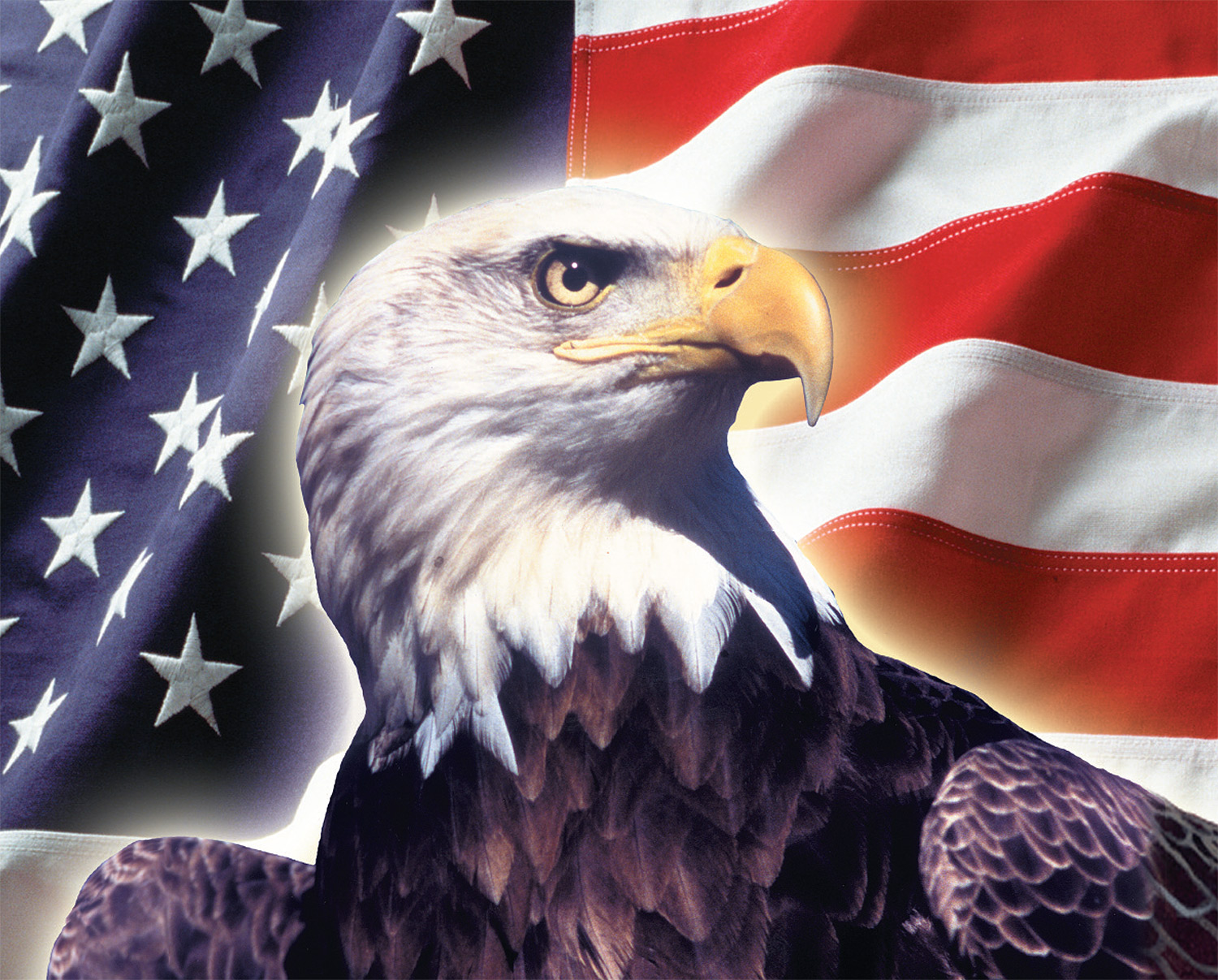 2019 will mark the eighteenth year from the day the Towers fell. Most of you reading this post have a snapshot memory of exactly where you were when the first plane crashed into the north tower of the World Trade Center in New York City. Chaos and heartbreak followed, accompanied by loss, disbelief, and shock. Almost 3000 people lost their lives that day, and hundreds of first responders would be forever impacted by the emotional and physical damage they would endure as a result of their heroic efforts to save as many people as they possibly could.

It was also a time of America pulling together—a time of unity with patriotism once again mainstream and popular. President George W. Bush was tasked with the mission of reassuring and calming the American people, while at the same time implementing a plan to combat terrorism in the United States.

As stated in the Baseball Almanac, baseball in 2001 will always be remembered not for the games that took place during the regular season, but for the patriotism and heroic tributes that took place in the wake of the 9/11 terrorists attacks.

Challenger gained nationwide recognition during the World Series that followed the terrorist attack. That year, the Arizona Diamondbacks and the New York Yankees faced off for the 7-game event. The first two games were in Arizona, but the next 3 were in New York City, and Yankees’ manager, George Steinbrenner, was determined that Challenger would play a role in games 3, 4, & 5 at the Yankee home stadium. Not counting the 55,000+ in the stadium for each game, over 68 million people watched on TV while a tattered American flag that had been recovered from Ground Zero after the Sept. 11th attack on the World Trade Center flew proudly over center field.

One highlight memory of Game 3 is when President Bush threw out the first pitch in the first home game for the Yankees in the series – with 55,820 people watching from the stands. Another unforgettable moment occurred when Challenger flew over the crowd during the 7th inning stretch of game 3 as Daniel Rodriguez sang “God Bless America.” 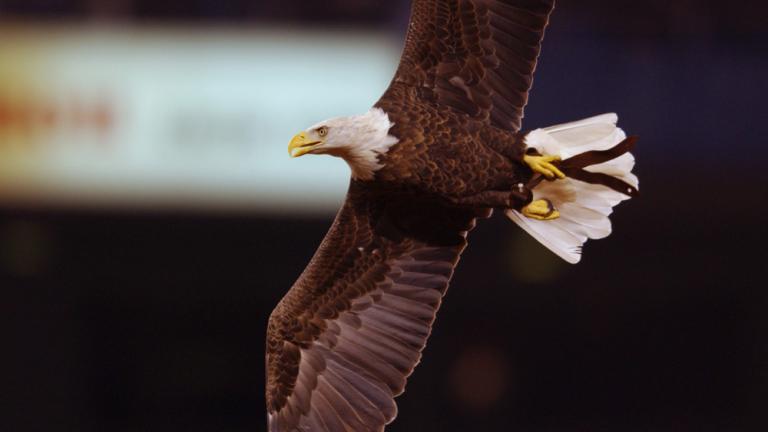 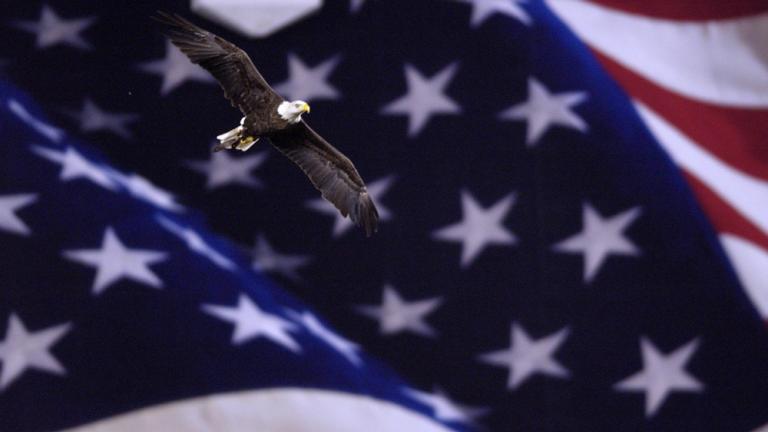 During the 3 games that Challenger flew at the 2001 World Series while in New York, AEF felt Challenger could be of additional support to First Responders.

AEF staff and Challenger not only visited Ground Zero with a police escort, but also numerous rescue centers and fire and police stations in Manhattan to help inspire and comfort all those who were physically and emotionally affected by the tragedy. Challenger was even issued his own FEMA Photo ID card that enabled him to enter many of the rescue centers in the Big Apple.

After Challenger’s rehearsals and game flights at Yankee Stadium during that Fall baseball season, our staff would often make time to visit a number of the most affected fire stations – in terms of individuals lost. We would simply walk in unannounced with Challenger perched on my glove. This frequently brought immediate tears to the eyes of many solemn firefighters and police officers who would often say ‘That’s what it’s all about…God bless America,’ with a sincere smile of hope on their faces. 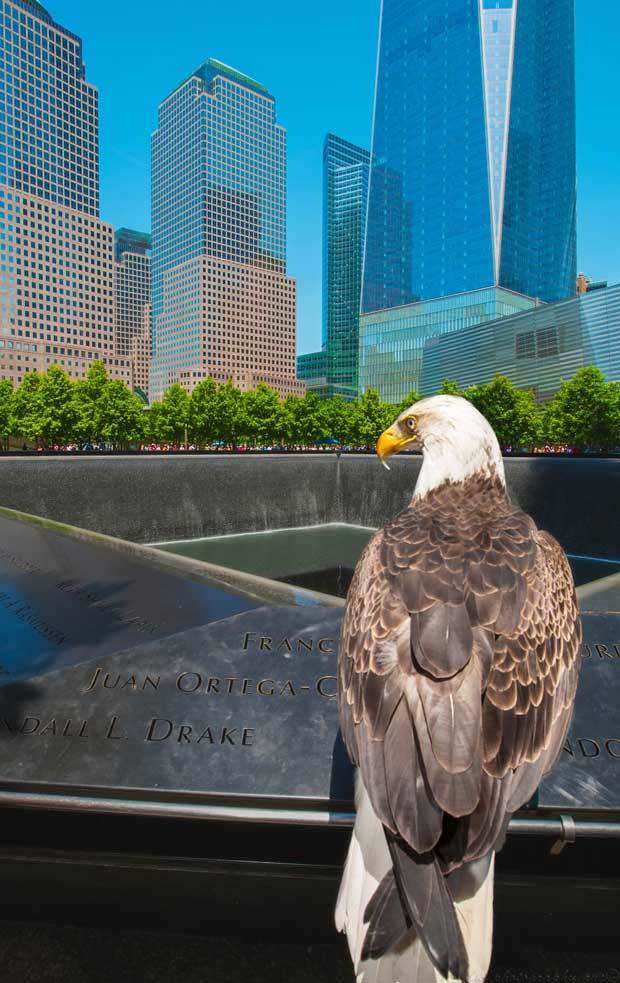 Challenger at the 9/11 Memorial

In the anniversaries following 9/11 2001, Challenger has been a rallying point at many patriotic events to remember that day. Challenger’s appearances are designed to honor and pay tribute to the victims and their families, and also to the first responders who put their lives on the line in order to save others. As the living symbol of our country, the Bald Eagle symbolizes strength, majesty, and courage. Challenger is a visible symbol of these qualities and inspires people wherever he appears.

There will never be another Challenger. This blog is dedicated to his life and the inspiration he has provided—and continues to provide—to millions of people in America and around the globe.