Bird is a frequent flier on Steinbrenner’s private jet. 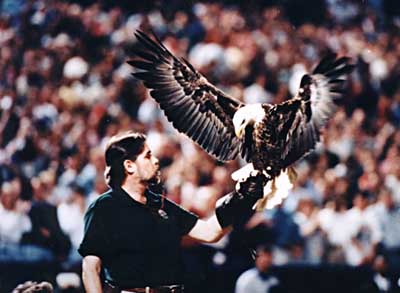 Challenger lands on the gloved arm of handler Al Cecere at a flyover during the National Anthem at Yankee Stadium.

It turns out that Challenger is a very busy bird. The 12-year-old bald eagle, whose spectacular fly-over punctuated the national anthem for the first two games of this World Series, spent most of yesterday as a passenger on George Steinbrenner’s private jet.

Challenger already had worked both the Division Series and American League Championship Series at Yankee Stadium this October. Steinbrenner invited the eagle and his five trainers back to the Bronx this weekend with another sizable contribution to the American Eagle Foundation, a non-profit organization devoted to the continued revival of the endangered species.

“He’s a very patriotic guy and he loves Challenger,” said Al Cecere, the president of the foundation. Steinbrenner loves Challenger so much that he used his own jet to fly the eagle and his support staff to Minneapolis yesterday for a noon appearance before the Vikings-Bills game inside the Metrodome. When that show was finished, they hopped back on the owner’s plane and returned to Teterboro airport in New Jersey. From there, the eagle received a police escort to Yankee Stadium, with the New Jersey police handing the limousine over to their New York counterparts at the state border.

“Without the escort, we wouldn’t have made it in time,” Cecere said.

Seeing Challenger in action is impressive. At Yankee Stadium, the eagle is let loose from the blacked-out batters eye beyond the centerfield wall and flies to Cecere, who is waiting at the pitcher’s mound with his arm outstretched. Upon landing, Cecere thrusts his arm in the air as Challenger spreads his wings, which incites a roar from the sellout crowd.

Challenger, who is named for the space shuttle on which its crew perished, has performed at numerous sporting events and talk shows.

A Tribute to Owl-X – by John Stokes