Fall means Football for American Eagle Foundation (AEF) staff and Bald Eagle Challenger.  Challenger is loaded into his custom-made carrier, carefully placed inside a Delta plane, and flown to a variety of stadiums across the nation. Hundreds of thousands of sports enthusiasts are inevitably captivated as they watch this famous non-releasable, free-flying Bald Eagle, the U.S.A’s living symbol of Freedom, soar majestically over their heads and into the stadium as the Star Spangled Banner is performed during pre-game festivities.

For the first time in AEF history, Challenger wore a special action cam on his back at several of these events, giving viewers a close-up eagle-eye view of his flights. WBIR Channel 10 News interviewed AEF President Al Cecere about this new technology. 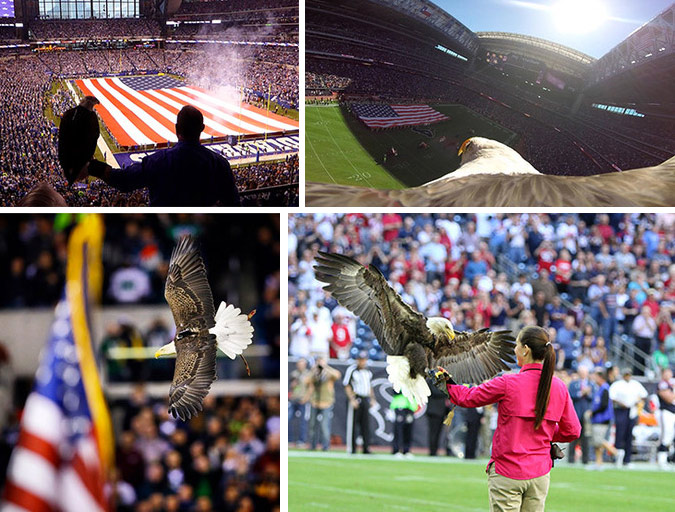 L-R top: Challenger is held by Spencer Williams before release at the playoff game between the Colts and Bengals Jan. 4, 2015. Challenger wore an action cam at several events this season, giving viewers an eagle-eye view of his flight!
L-R bottom: A soul-stirring moment as Challenger flew over the crowd at the Eagles-Cowboys game on Dec. 14 while the National Anthem played. Laura Sterbens catches Challenger after his flight at the Texans – Bengals game on November 23.

Educational Outreach by the American Eagle Foundation
Scroll to top