Challenger Soars Across the Country to Kick Off America’s Game 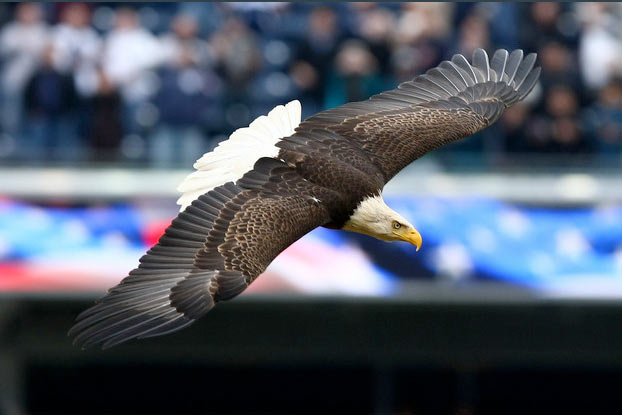 NEW YORK — America’s eagle ambassador is taking to the skies over America’s greatest baseball parks, kicking off a new season of ‘America’s pastime’ with patriotic flair. ‘Challenger,’ the flying symbol of the American Eagle Foundation is in New York to fly over Yankee stadium tomorrow, April 8th, to open the team’s season and to honor America.

Today, Challenger appeared on Good Morning America, paying tribute to the troops in Iraq. In the earlier leg of the trip, Challenger flew over Kauffman Stadium in Kansas City to kick off the Royal’s 2003 season. He also soared over Astros stadium in Houston to honor the Space Shuttle Columbia crew tragically lost in 2003, and over The Ballpark at Arlington, the home of the Texas Rangers as they open their 2003 season. Challenger and his crew will return to Houston April 9th through the 11th.

“Each place we go, as soon as Challenger takes wing, you can feel the spirit of patriotism and pride in the ballparks,” said Al Cecere, President of the American Eagle Foundation. “Challenger provides a living symbol of what freedom in America is all about, and why we are trying to free the people of Iraq.”

Challenger, is the first Bald Eagle in United States history trained to soar free over pubic events to illustrate the freedom all Americans celebrate. Traveling coast to coast with staff members of the American Eagle Foundation (www.eagles.org), Challenger educates and inspires people with his majestic flights.

The non-profit eagle preservation group, based at Dolly Parton’s Dollywood entertainment park in Pigeon Forge, TN, cares for and exhibits the Eagles and other birds of prey under special government permits. Acting as an educational ambassador, the eagle not only gives Americans a memorable glimpse of his stately beauty, but also helps raise public awareness about wildlife protection and ecological concerns.

The non-profit American Eagle Foundation is federally licensed to provide care to over 65 birds of prey daily, including 35 eagles. These birds are non-releasable due to permanent physical disabilities or accidental imprinting on humans. Many of the non-releasable eagles residing at the facility have successfully reproduced while in the care of the Foundation staff. The organization operates the largest Bald Eagle breeding facility in the world, and has released dozens of captive-hatched eaglets into the foothills of the Great Smoky Mountains area. They have also been a party to releasing hundreds of other eaglets into the wilds of Tennessee in cooperation with the U.S. Fish & Wildlife Service and Tennessee Wildlife Resources Agency, and have supported numerous public education and eagle recovery and protection projects in various states.
-AEF 2003-