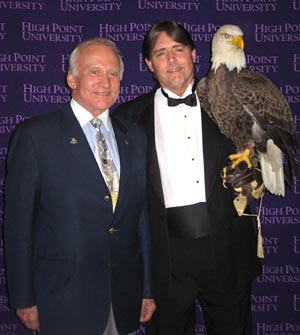 On Saturday morning, May 10, 2009, High Point University had beautiful blue skies, a guest speaker who has seen blue skies from a perspective few people ever have, and a majestic Bald Eagle named ‘Challenger’ – who is also very familiar with soaring in that big blue sky.

Dr. Buzz Aldrin, whose Apollo 11 flight first landed man on the moon, told the graduating class he’s proof the sky is not the limit. While he didn’t focus much on the nation’s economic crisis, he did tell High Point’s 657 graduates and their families fixes will come from this generation, but they’ll take time.

Back when Aldrin made his world-renowned spacewalk with Neil Armstrong, the U.S. space program was seen as vital, if for no other reason, to keep up with Russia during the Cold War.

Aside from Dr. Aldrin, the thousands of folks who went to commencement today got to witness another rare sight: Challenger the Bald Eagle. Immediately after the graduates’ names were read, he soared over the crowd to honor their achievements.

As a baby, he was blown from his nest during a storm. After he was rescued, he had too much human contact to return to the wild. He’s named in honor of the Challenger Space Shuttle and crew, which suffered a deadly explosion just seconds after take-off in 1986.