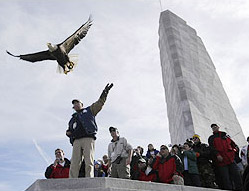 CHALLENGER the Bald Eagle is released from the edge of the Wright Brothers National Monument in Kill Devil Hills, North Carolina, on the eve of the centenary of man’s first powered flight.

It was 100 years ago yesterday that Orville Wright made a 12-second flight over 30m in the Flyer. The First Flight Centennial Celebration was to climax yesterday with a replica plane re-enacting the original flight near the memorial.

A constellation of legendary aviators, including Neil Armstrong, the first man to walk on the moon, were among those who gathered to watch the flight. –– REUTERS
[/av_textblock]