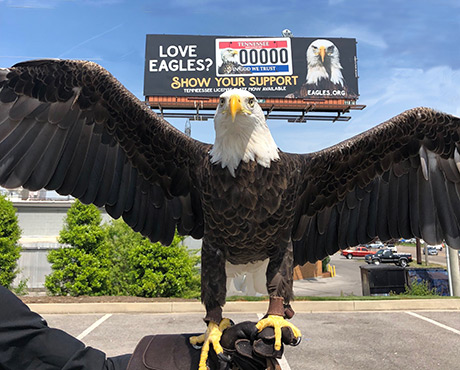 Driving down a busy commuter road in Knoxville, TN, a huge billboard reminds all Tennessee residents that they can be part of the recovery and sustainability of the Bald Eagle by purchasing a Bald Eagle specialty license plate from their County Clerk. 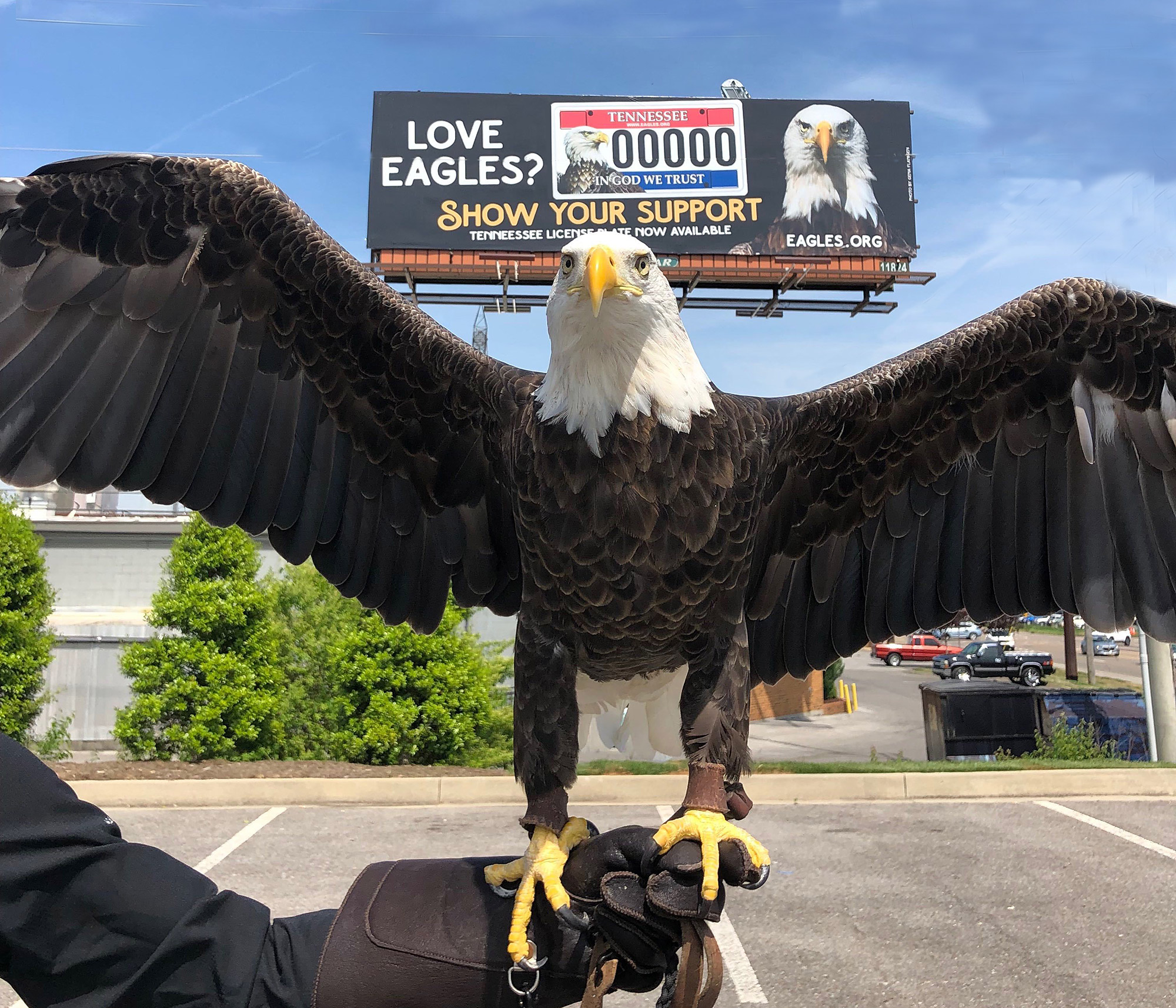 Challenger perches on a handler’s glove with the Tennesse license billboard in the background.

In 2003, the non-profit American Eagle Foundation (AEF), headquartered at Dollywood, announced the approval of Tennessee State legislation (Bill No. 1303) for the development of a vehicle license plate honoring the Bald Eagle, our nation’s Freedom symbol.

A portion of the proceeds from the sale of the new plate has benefitted the AEF since the plate became available. Over the years the AEF has relied on these proceeds to support the daily care and future protection of the Bald Eagle and other birds of prey through the four pillars of Education, Re-population, Conservation and Rehabilitation.

The specialty plate features the image of Challenger, Tennessee’s nationally famous Bald Eagle. The 30-year old bird is cared for by the AEF and has inspired millions of people, throughout his long career, to respect and honor wildlife and be stewards of our environment. 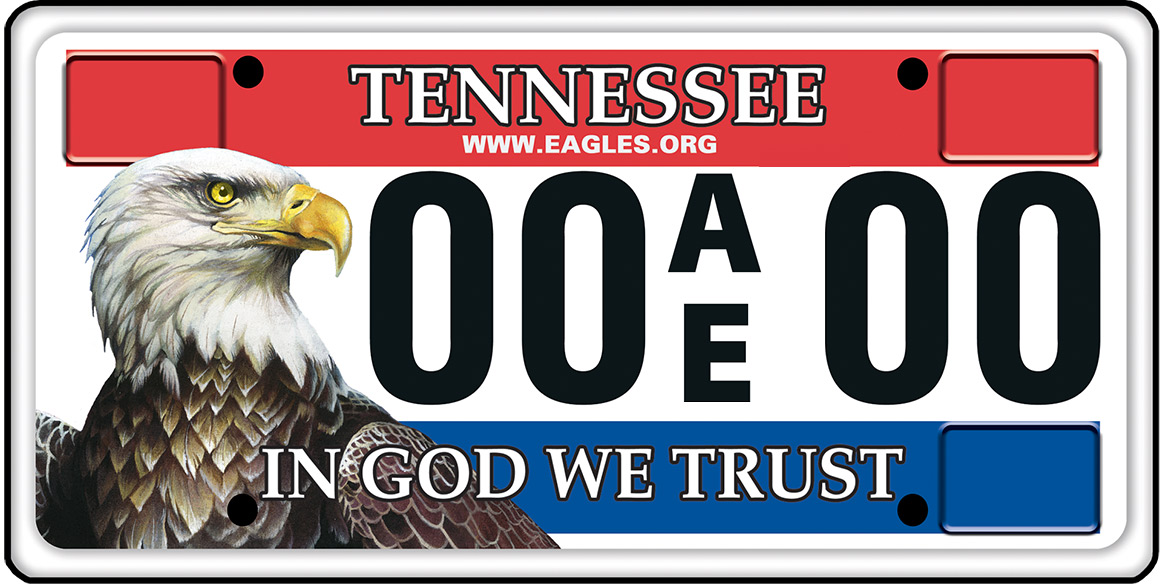 In 2019 Challenger retired from free-flight demonstrations, but new doors have opened for him to inspire other audiences at other venues.

The American Eagle Foundation appreciates the State of Tennessee working with us to develop this speciality license plate. This is just one more way we can promote the cause of protecting the Bald Eagle and further our message of conservation.

The Artist Behind the License Plate 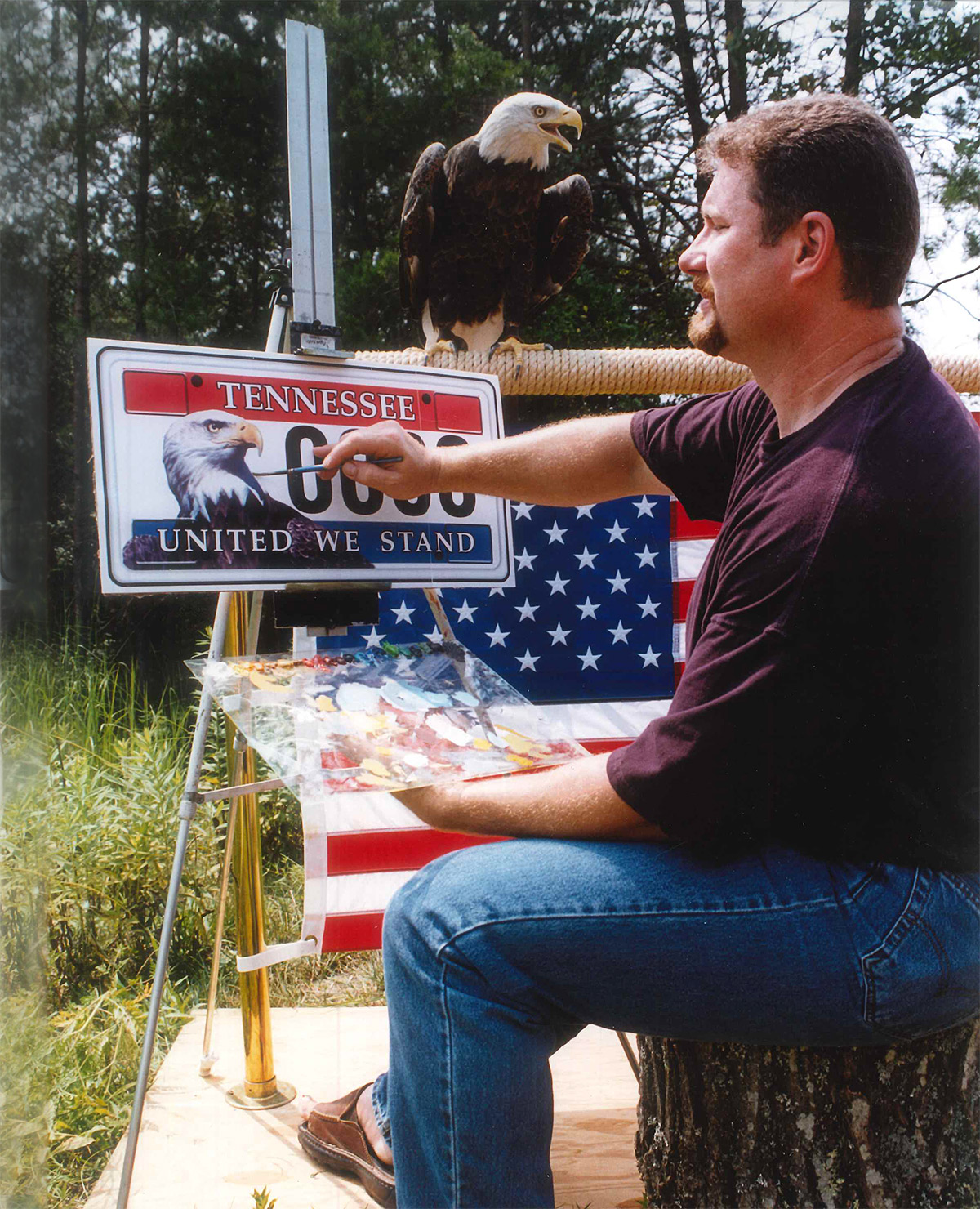 Spencer Williams, nationally recognized wildlife artist, was commissioned to paint Challenger for the Tennessee license plate. This picture depicts an early version of the license plate. The final version says “In God We Trust” at the bottom.

Tennessee wildlife/nature artist Spencer Williams, a board member at the time of commission, was requested to paint Challenger’s image for the plate. Spencer is now Chief Operations Officer of the American Eagle Foundation.  Laprees Advertising & Design of Sevierville  created the graphic layout.

It was a brilliant choice to have Spencer paint Challenger. In addition to being a world class artist, Spencer often travels to events with Challenger and has a special relationship with him.