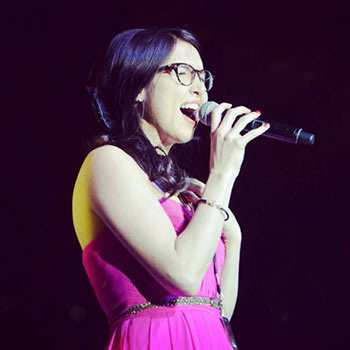 Julia Cecere performs “At Last” – receiving a standing ovation from the crowd.

For 20 years, Celebrity Fight Night has raised many millions of dollars for charities, including the Muhammad Ali Parkinson Center at Barrow Neurological Institute. Countless lives have been changed because of the generosity of those who support this event.

The American Eagle Foundation has been a proud participant in this annual event for 7 years. This year, April 12, 2014, the star-studded event featured more than 40 celebrities and over 1000 guests. Among those in attendance were Seattle Seahawks cornerback Richard Sherman, actor Robert DeNiro, The Band Perry, Michael Bublé, Billy Crystal, Reba McEntire (MC for the event), Kenny Rogers, David Foster, and NY Yankees former coach, Joe Torre.

On a personal note, we have to say that OUR favorite performer—besides the eagle Challenger, who, of course made a spectacular flight during the National Anthem over the appreciative audience—was our own Julia Cecere.

Each year at this event, producer/composer David Foster asks a non-celebrity from the audience to “sing into the mike.” Julia was selected to do this, but instead of simply taking the mike from Foster, she took center stage, and performed an incredibly beautiful rendition of Etta James’ At Last to the accompaniment of the orchestra conducted by Foster.

Following the performance, Julia received a standing ovation and high praise from many of the stars. For the remainder of the weekend, she was bombarded by fans who found her performance “the highlight of their evening!”

We are pleased to share Julia’s performance with you!