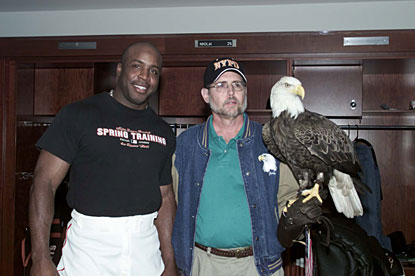 Super slugger Barry Bonds enjoys a casual pre-game visit by American Eagle Foundation President Al Louis Cecere and Challenger, the celebrity Bald Eagle, in the Giants locker room at Pacific Bell Park. The majestic bird is known for his soul stirring free-flights during the singing of the National Anthem at the 1997, 1999, 2000 and 2001 World Series and numerous other high-profile sporting events.

“Dusty Baker and the players were awestruck. He’s an impressive bird to meet up close. Barry showed him a lot of respect and even asked to touch his wings,” said Al Louis Cecere, President of the eagle preservation group.

Bonds and the San Francisco Giants team members signed a baseball to be used as a fundraiser for the non-profit organization (www.eagles.org). The Giants also donated $10,000 to help care for Challenger and his feathered friends. The Foundation is offering the ball for sale for $250,000 to establish an endowment fund for Challenger’s future care.

Sound a bit pricey for a single baseball? Maybe so, but that’s not all the would-be owner will receive. As an added bonus, the special Giants ball will be personally delivered to a generous donor by Challenger himself. That visit will also include a private photo session and an educational free-flight demonstration by the regal bird. In addition, the aviary where Challenger resides in Tennessee (when he’s not on the road) will be named in honor of the donor for a five-year period. That could be a real bargain for a person or company genuinely interested in helping a very special American eagle.

“We’re grateful to the Giants for helping give wings to the preservation of our national bird. Other teams have donated to the cause too,” said Cecere. “God has really used the sport of baseball to bless us. Now, we’re praying that this ball will help hit a home run for Challenger…hopefully, Barry Bonds style.”

Once Again, a Land of Eagles