Be A Voice For Vultures 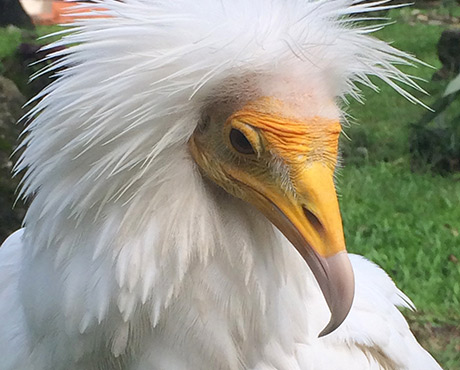 Be A Voice For Vultures

Vultures play a critical role in nature. They are scavengers and feed on dead animals such as deer or cattle, keeping the environment clean and helping to prevent the spread of disease.

There are 2 main types of vultures: New World Vultures restricted to the western hemisphere, and Old World Vultures, including many species found in Asia and Africa. 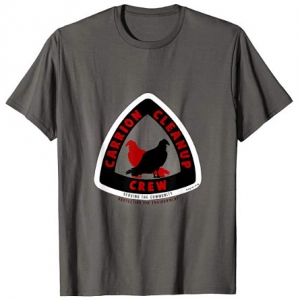 The American Eagle Foundation has designed a shirt that calls attention to vulture awareness. All profits from the sale of this shirt will be used to help fund the work currently being done by 5 “Vulture Restaurants” in Nepal – a conservation initiative to offer safe food to the critically endangered vulture population in that part of the world.  Our goal is $5000 and we invite you to Be A Voice For Vultures by purchasing and proudly wearing the shirt!

CLICK TO ORDER T-SHIRT & BE A VOICE FOR VULTURES!

However, the California Condor’s story is quite different. The International Union for Conservation of Nature (ICUN) lists the Condor as “Critically Endangered.”

The Condor is the largest vulture in North America. Its wingspan can measure over 9 feet and it can weigh more than 20 pounds. Native Americans called them “Thunderbirds” because of the sound their wings made when they took to the air. 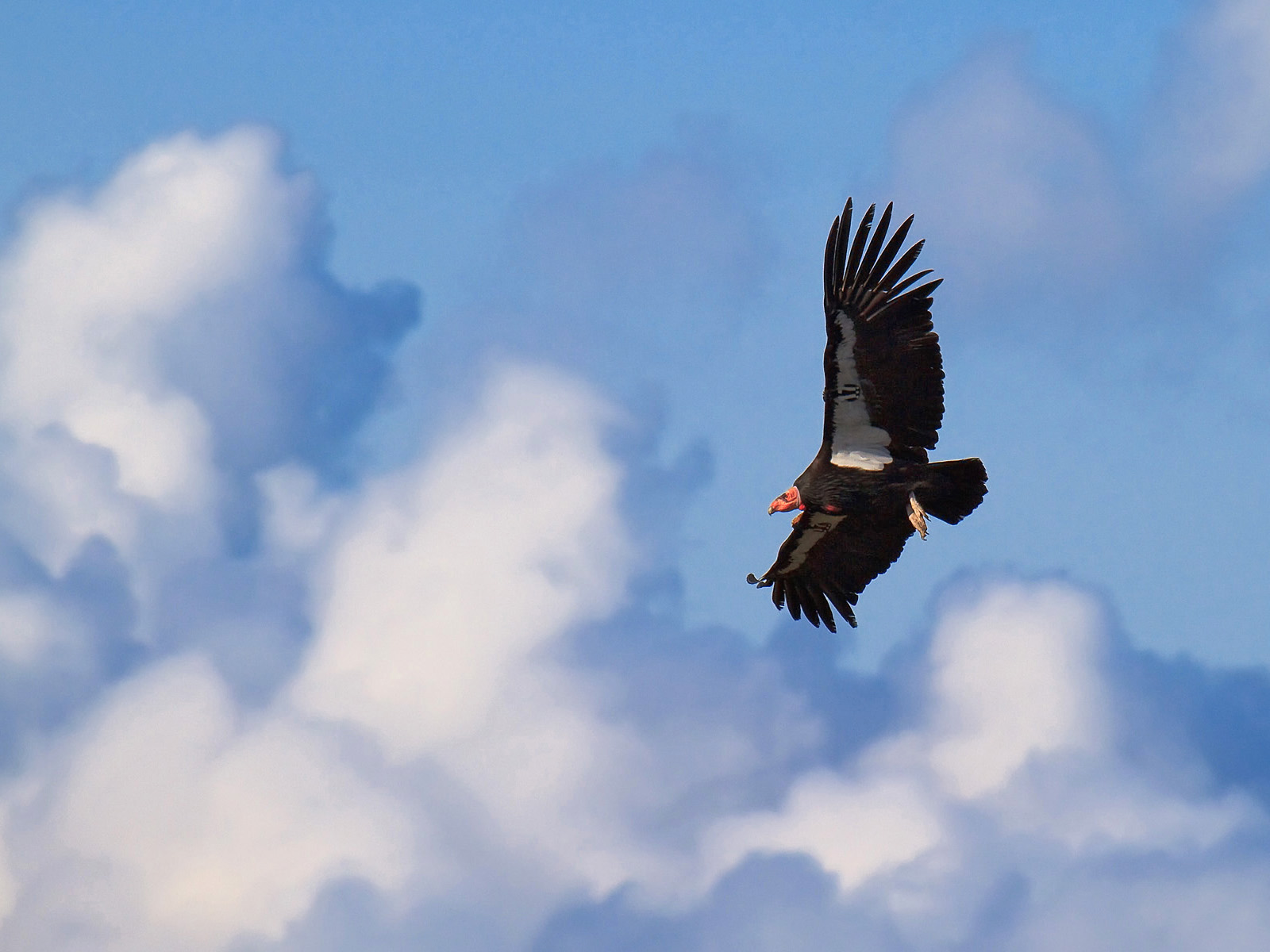 Figures differ slightly, but the population of Condors in the wild dropped to non-sustainable levels by 1982, when reports revealed only 22 Condors left in the wild. This rapid decline was due primarily to lead poisoning. Condors often feed communally, and a single contaminated carcass can poison several Condors. Other threats to Condors included poaching and microtrash, which Condors often mistake for food. Pieces of metal and plastic may be eaten by adults or fed to chicks. Condors are also killed when they collide with power lines.

A herculean effort to save the species from extinction was begun shortly thereafter, involving capturing all remaining wild condors and placing them in safe and stable environments at captive breeding facilities such as the San Diego Zoo, the Los Angeles Zoo, Ventana Wildlife Society, The Peregrine Fund, and the Oregon Zoo.

The first two Condor fledglings from this program were introduced back into the wild in 1992 and the program is ongoing. Condors now number in the hundreds in California and are making a slow but steady comeback.

Condors normally lay only one egg every two years, and young do not become sexually mature until 6-8 years of age. This makes the recovery of the species extremely challenging, and it is difficult to raise numbers quickly simply due to the species life history. One way to improve on nature is by enticing a female Condor in captivity to “double clutch” by removing an egg from the condor nest, placing it in an incubator, and thereby hoping the female condor will “double clutch” (or lay another egg).

Like the initiative to save the Bald Eagle, the plan to save the Condors is working! In the image below, a condor’s cliff-side aerie is home for this condor and an egg. The patagial tag on the Condor shows that this condor was part of the recovery program and provides a way to track each individual Condor. 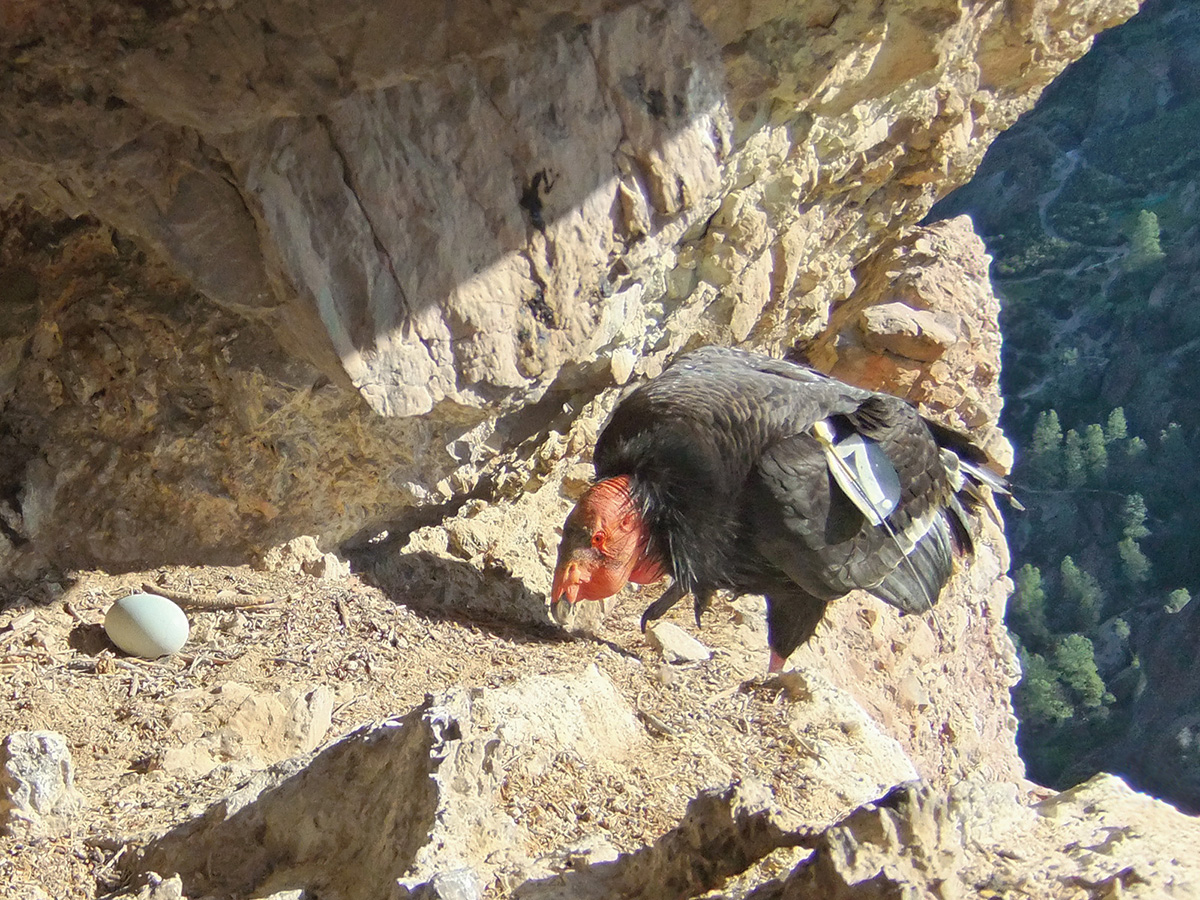 And California, the primary range for Condors, has just become the first state to ban lead ammunition for hunting, more good news for condors! Arizona has a voluntary lead reduction program that distributes free copper ammunition to hunters in the Condors’ range. 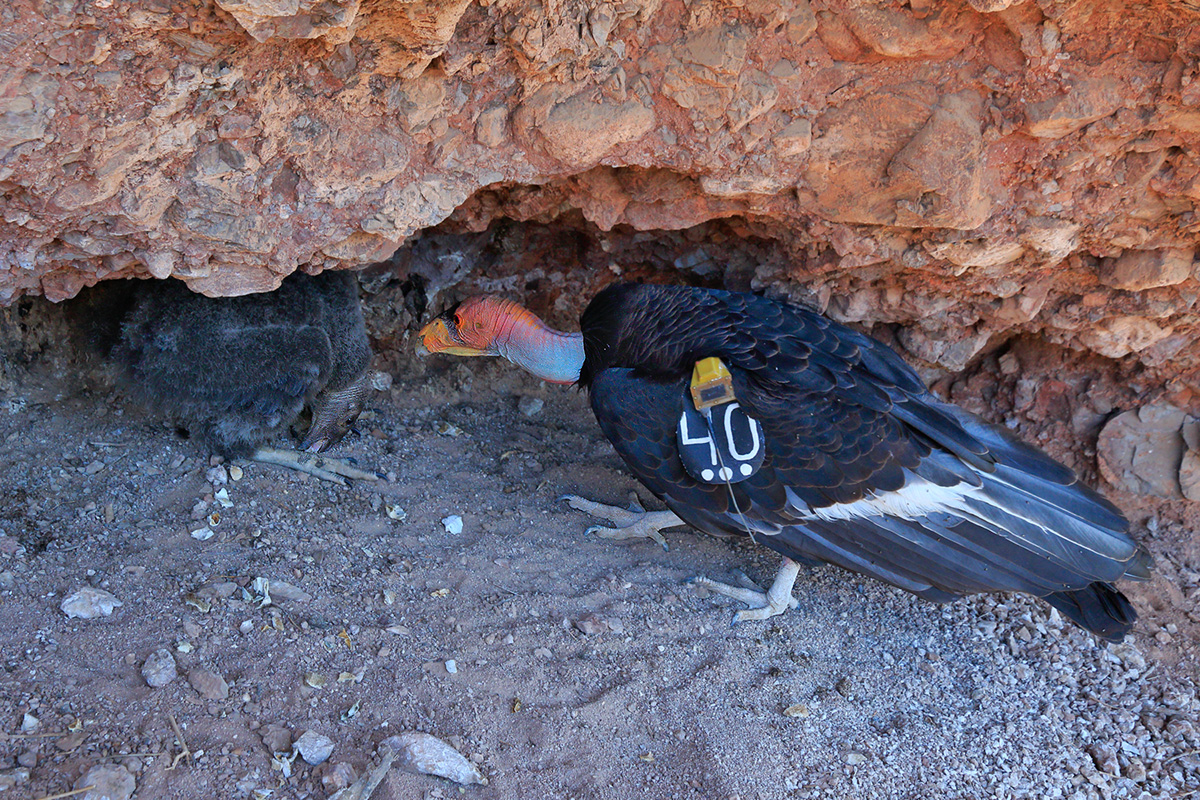 Chris Parish, Director of Conservation for The Peregrine Fund stated: “After over two decades of efforts to restore condors to the southwest, it is nice to take a moment to reflect on the steady and slow progress made and thank those who have contributed so much, like Zion National Park, to see this effort through. We have a long way to go, but today we celebrate this milestone.”

The Peregrine Fund has been at the forefront in investigating the Asian vulture crisis. In the 1980s, there was a robust population of vultures throughout India and southern Asia with varying estimates of from 40 to 80 million individuals.

Vultures are extremely important because this same area is populated by about 500 million cows! Cows are not a large part of the human menu in this part of the world, with only 4 percent of the population being consumed by humans. When cows die, the vultures dispose of the carcass, thereby keeping the environment much cleaner than it would be otherwise and thereby preventing the spread of disease.

Collapse of Vulture Population in Asia

But vulture populations in India and Southern Asia began to collapse between 1992 and 2000, declining by as much as 99.7 – 99.9 percent. Species that were affected were: Oriental White-backed, the Long-billed, the Slender-billed, the Red-headed, and the Egyptian Vultures.

The Peregrine Fund discovered in 2003 that an anti-inflammatory drug, Diclofenac, had been administered as a painkiller to older cows to make their lives more comfortable. However, when the cows eventually died, and vultures consumed them, the vultures died soon thereafter from kidney failure. Since flocks of vultures congregated together around a carcass at these communal feasts, many vultures were immediately affected when the cow was eaten.

A disastrous side-effect from the die-off of vultures was the exponential rise of the feral dog population. Humans were bitten by the dogs, some of which had rabies, causing 47,000 deaths in humans. The health costs between 1993-2006 that can be traced back to losing vultures as the primary scavenger was about $34 billion.

The Parsi religion as well as some Buddhist colonies in Tibet practice Sky Burials, which became increasingly difficult after losing a high percentage of the vulture populations.

Kayla is Assistant Curator of Birds at AEF and shares her experience with the Parahawking Project:

The following slideshow contains photos taken by Kayla between September 2014 and April 2015.

Non-releasable Egyptian vulture, Bob, one of the stars of the Parahawking Project.

A large cinereous vulture lands among griffon, white-rumped, and red-headed vultures at the vulture restaurant in Ghachok, Nepal. Cinereous vultures can have wingspans between eight and ten feet.

A Himalayan griffon vulture shows off its impressive wingspan among other griffon vultures and a cinereous vulture with a clear view of the bones of a cow carcass.

Himalayan griffon vultures and white-rumped vultures at a cow carcass at the Ghachok vulture restaurant. 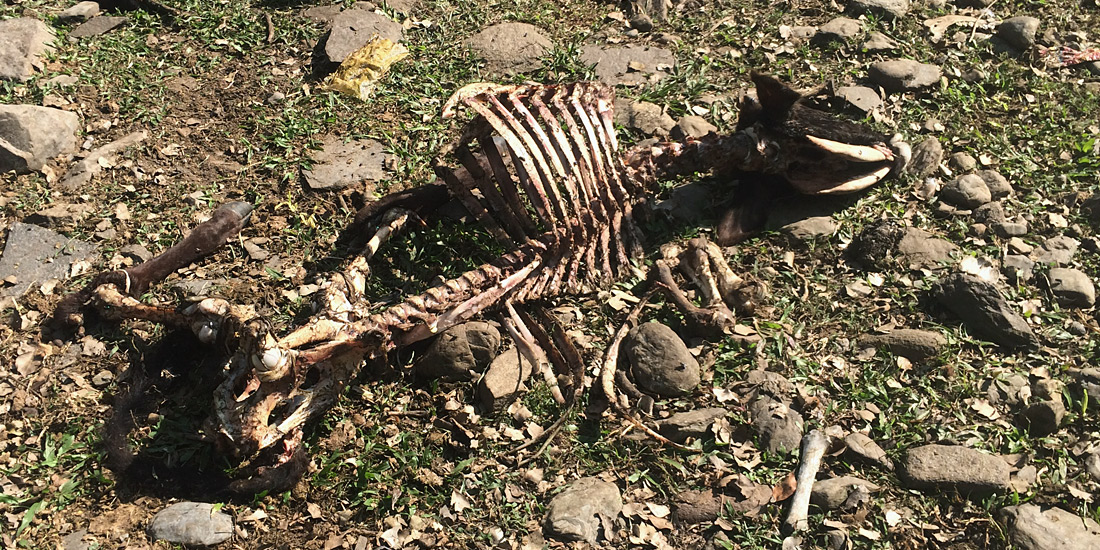 The bones of a cow carcass after a vulture feeding. 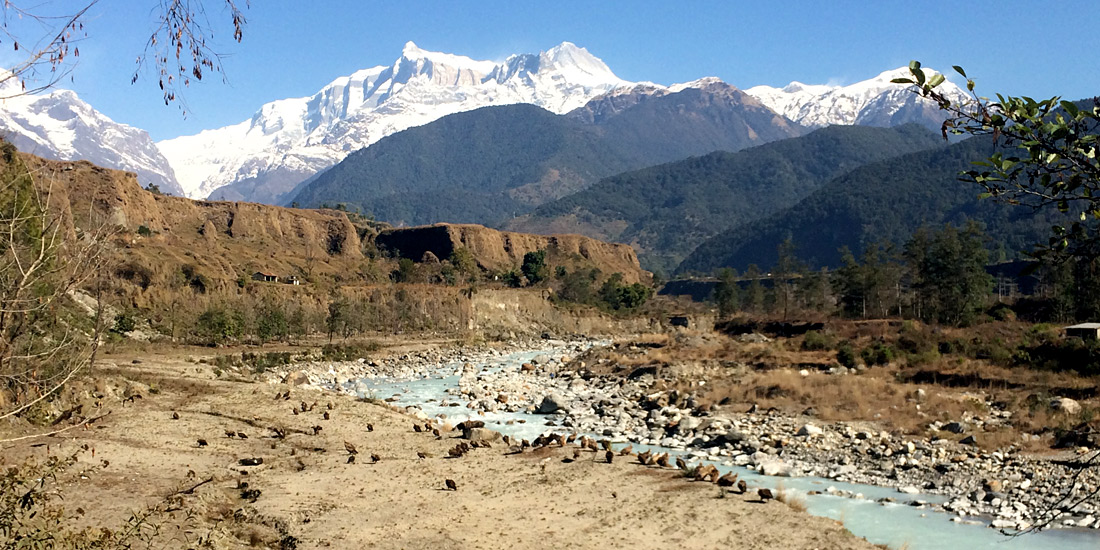 Vultures line the banks of a river at the base of snow covered peaks just outside the walls of the Ghachok vulture restaurant.

Populations are beginning to stabilize but are still low and vulnerable, and are constantly being monitored by the Peregrine Fund and other NGOs. Below are listed status of various species of Asian Vultures.

For an overview of the African Vulture crisis, watch the following video by Cornell Lab of Ornithology, published Aug. 2, 2019.

VULTURES IN AFRICA ARE IN CRISIS

The vultures of Africa are rapidly disappearing. These birds serve an invaluable role as scavengers in the ecosystem. They differ from other scavengers due to their strong stomach acids being able to break down pathogens and disease. In disposing of carcasses, they help prevent the spread of anthrax, rabies, tuberculosis, and botulism. Vulture decline directly impacts human health and rise of disease. Besides, who wants to see a world without these beautiful birds soaring above them?

Many cultures and religions believe these vultures hold many special powers such as increasing intelligence or even being able to predict the future. The poaching of vultures for use in traditional medicine is still commonplace across Africa.

Unintentional poisonings: Often, farmers will be upset that predators, such as lions and hyenas, killed their livestock. They lace the carcass with poison as revenge, but more often than not the vultures are the victims.

Intentional poisonings: While all the above issues are negatively impacting African vultures, intentional poisonings are one of the greatest threats. Poachers that kill large mammals, such as elephants and rhinos, are doing so illegally. Due to the natural behavior of vultures soaring over their next meal, poachers will lace the carcass with poison to kill the vultures so their location isn’t given away to law enforcement. One incident can easily kill dozens of vultures, with the largest recorded poisoning incident leading to the death of 537 vultures.