BCS National Championship: The Eagle Has Not Landed in Auburn 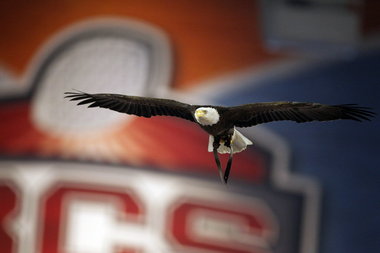 Challenger flies during the National Anthem at the BCS National Championship.

As fans sift through the details of Oregon’s 22-19 loss to Auburn on Monday (Jan. 10, 2011) in both teams’ first BCS national title game, one confusing footnote remained.

Why, some Oregon fans wondered, did bowl officials allow an eagle to fly in tribute to just one team, referencing the Auburn battle cry of “War Eagle”?

The answer: They didn’t.

Challenger, the Bald Eagle named for the fallen space shuttle, is a rescue bird trained to fly in stadiums and at other events. He has appeared at Fiesta Bowl events many times, bowl spokesman Tony Alba said. (The Fiesta organization runs its namesake bowl, along with the Insight bowl and the BCS national championship when it is in the Phoenix area.)

Challenger’s appearance is a bowl tradition, and was not meant as an homage to Auburn or a slight of Oregon, Alba said.

“We actually thought about that and discussed it quite a bit,” Alba said. In the few days since the game he has received many e-mails about various aspects of the bowl, he said, but “I haven’t had a single e-mail on that. Hopefully people understood, and we tried to make that really clear in the intro and in the program.”

With the gathering roar from a very amped-up crowd before the game, it is doubtful that many folks could hear announcements or were thumbing through printed materials.

Why, anyway, does a school with a Tiger mascot pay homage to an eagle? Auburn’s website explains:

“The most popular story about the battle cry dates back to the first time Auburn met Georgia on the football field in 1892 and centers around a spectator who was a veteran of the Civil War. In the stands with him that day was an eagle the old soldier had found on a battlefield during the war. He had kept it as a pet for almost 30 years. According to witnesses, the eagle suddenly broke free and began majestically circling the playing field.

“As the eagle soared, Auburn began a steady march toward the Georgia end zone for a thrilling victory. Elated at their team’s play and taking the bird’s presence as an omen of success, Auburn students and fans began to yell ‘War Eagle’ to spur on their team. At the game’s end, the eagle took a sudden dive, crashed into the ground, and died. But the battle cry ‘War Eagle’ lived on to become a symbol of the proud Auburn spirit.”

No word on whether bowl officials considered providing equal time in the pregame ceremony by letting loose a duck.