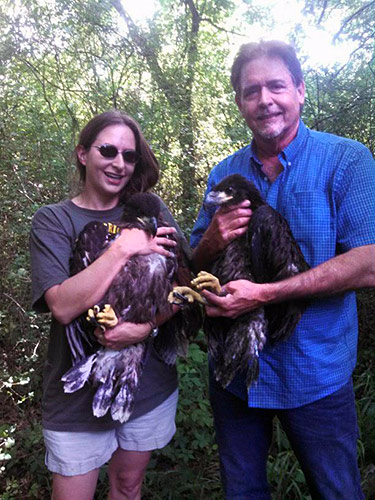 Two Bald Eaglets rescued Monday may make their first flights after a fast-moving storm destroyed their Sevier County nest and sent them tumbling some 75 feet to the ground.

It was only the latest challenge the birds have faced in their short lives, said Al Cecere, president of the American Eagle Foundation, who credited their survival to grace more than good luck.

“It was a miracle all the way around,” Cecere said.

The nest already had become a bit of a spectacle earlier this year for grocery shoppers at a nearby Kroger along Winfield Dunn Parkway in Sevierville. So much so that Cecere’s team posted several signs in the parking lot asking people to keep their distance from the tree.

More recently, the foundation also worked to convince two nearby helicopter tour groups to adjust their routes after eggs were laid in the nest.

And then the storm hit.

The 6-week-old birds, which Cecere estimated to be six or seven weeks short of maturity, were left helpless on the ground after a storm Sunday night and likely would have been killed by predators within a day, he said.

Photographer and AEF volunteer John Prickett, who has been documenting activity at the nest for several months, wasn’t there taking pictures Monday. He did, however, happen to be shopping at the Kroger, Cecere said.

He quickly contacted Cecere once he realized the nest was gone, and Al, along with AEF staff members Michelle Bauer, Karen Wilbur, and volunteer John Prickett soon located the eaglets in the heavy brush that surrounds the tree. Their only injuries appeared to be some scratches and damage to a few feathers.

“It kind of buffered their fall a bit,” Cecere said. “The good news is there’s no broken bones. It could have been a lot worse.”

Both birds now are in the care of the nonprofit at its Pigeon Forge headquarters. Once the eaglets are grown, Cecere plans to release them back into the wild from AEF’s artificial nesting tower on Douglas Lake in Jefferson County.

“Hopefully,” he said, “they’ll still get to fly free.”

UPDATE: June 5th. One of the birds appeared injured and was taken to the University of Tennessee College of Veterinary medicine for examinations.

According to caregivers with The American Eagle Foundation, x-rays at the Vet School showed one eaglets had a broken wing and it is currently bandaged up and resting. The second eaglet will be taken to an artificial nesting tower nearby.
[/av_textblock]