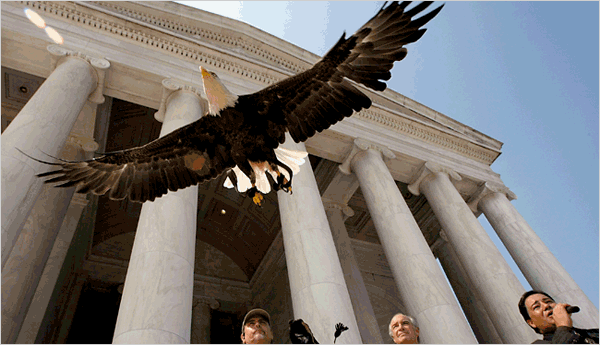 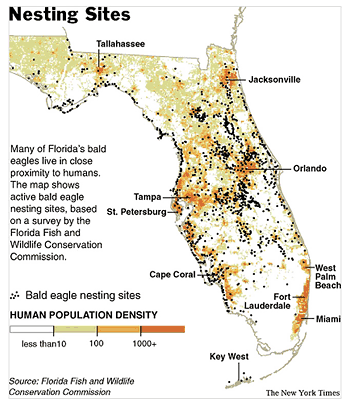 Here in Florida, Bald Eagles have thrived for a decade, multiplying to a statewide population of 1,150 breeding pairs and giving this state, with Minnesota, bragging rights as the top eagle haven in the country.

Bald Eagles, aloof centurions of the wild, seem to have discovered their inner Updike and moved to Florida’s ever-expanding suburbs. They can be found nesting in cellphone towers and raising chicks near landfills and airport runways, along highways and high up in the pine trees of the state’s upscale developments.

Here, some people see the birds as part mascot, part amenity — and a thorough blessing.

“We’ll be in our backyard, floating in the pool, and see these beautiful winged creatures flying over us,” said Anne Lubner, an interior decorator who lives in the Grey Oaks subdivision, a gated community in Tarpon Springs.
A neighbor, Patti Schuman, said she returned home from dinner with her husband 15 months ago to find a frightened fledgling, with a seven-foot wingspan, cowering by the front door after falling — or being pushed — from its nest. “It hunkered down in a corner next to a plant” until experts took it back near the nest, Ms. Schuman said. 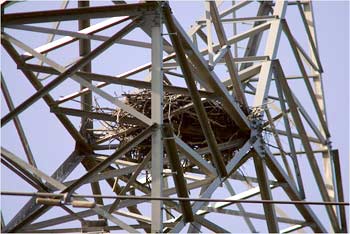 Her neighborhood follows with intense interest the eagles’ spring rituals of flight training and the daily rituals of feeding and bathing. The only thing required of residents — in return for feeling that they are living in a National Geographic special — is a willingness to tolerate the odd fish skeleton on the lawn, or the occasional white pile on the drive.

In Florida, home to about 12 percent of all eagles in the lower 48 states, the question is no longer whether these birds can cope with development and commotion, but how much is too much?

As John White, a wildlife biologist with the Florida Fish and Wildlife Conservation Commission, said, “No way is development going to stop” in central Florida. “The question is, Are the birds going to be able to handle that new level of adaptation? We don’t know.” 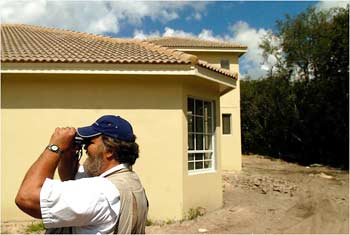 Biologists, after recovering from the initial shock of finding eagles in the suburbs, have documented in a six-year study that suburban birds breed as well as their rural counterparts. But the young birds have slightly higher mortality, thanks to ill-timed meals of roadkill or too-comfortable seats on power lines.

But what the birds’ proven adaptability means for their future management, in Florida and around the country, remains a matter of debate. The arguments and lawsuits over the appropriate management of bald eagles in a post-endangered era had kept the final ruling on their status delayed since 1999.

Property-rights advocates have argued in court that restrictions on the use of eagle-occupied land should be loosened; conservationists have countered that eagles still need buffers against the hubbub of humanity. Mr. 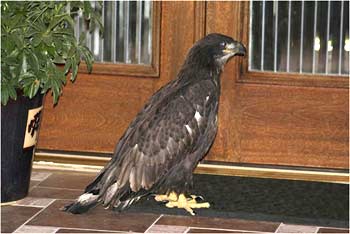 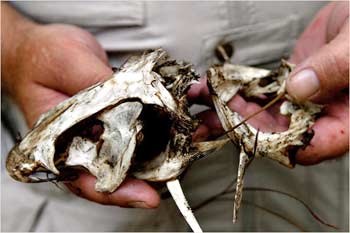 Catfish bones found beneath a nest.
Chip Litherland for The New York Times

Kempthorne’s announcement was timed to meet a deadline stemming from a lawsuit by a Minnesota property owner.

Mr. Kempthorne, speaking in Washington at the Jefferson Memorial with a squawking Bald Eagle tethered nearby, promised that “from this point forward, we will work to ensure that the eagle never again needs the protection of the Endangered Species Act.”

He said protections that would remain in place included monitoring bald eagle populations and ensuring that no new poison begins to decimate their numbers as DDT once did. Conservation groups, like EagleWatch, a Florida group operated by Lynda White from the Audubon Society’s Center for Birds of Prey, based in Orlando, help with that effort.

Ms. White said she believed that some developers, usually resentful of the land-use limitations that accompany an eagle’s nest, now see the bird as a marketing tool. “If that gets the birds more of a conservation area, that’s great,” she said.

Tony Steffer, a Tampa-based biologist who has worked for developers and for the state, said he believed in the eagles’ resilience. “If eagles were thin-skinned, there wouldn’t be an eagle in the United States,” Mr. Steffer said.

But the birds are too opportunistic for some people’s taste. Inadvertent landlords, including utility companies, cellphone companies and airports, are dubious about their tenants. The Orlando-Sanford Airport got unwelcome publicity this spring when it cut down four eagle-occupied trees as threats to aviation; biologists say the birds will just find new homes nearby.

But the tall pines they prefer are fewer and farther between. At the same time, more and more manufactured towers are available.

Pointing to a nest on a 100-foot electricity-transmission tower in southern Seminole County, Mr. White said: “They like heights, they love an open field, and there’s a lake nearby. It’s got everything they want, except for the 450,000 volts coursing through it.”
[/av_textblock]