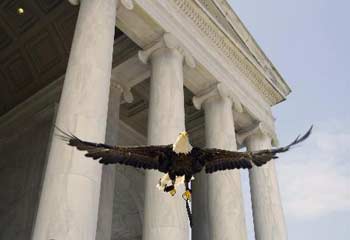 Challenger the Bald Eagle at the Jefferson Memorial

June 28 (Bloomberg) — A Bald Eagle swept above a crowd at the Jefferson Memorial in Washington as the Interior Department declared that the national bird is no longer threatened with extinction after four decades as an endangered species.

With the squawking bird, Challenger, to his left, Interior Secretary Dirk Kempthorne said, “Ladies and gentlemen, I’m proud to announce that the eagle has returned.”

Challenger, a 19-year-old male with a six-foot wingspan, traveled from a Pigeon Forge, Tennessee, sanctuary for the event, said its handler Al Cecere of the American Eagle Foundation. The orphaned bird, who scrutinized the crowd and Kempthorne during the speech, was raised by humans and can’t survive in the wild.

Though not covered by the Endangered Species Act, bald eagles will continue to be protected under two other laws, the agency said. Nesting pairs of the birds, with distinctive snowy heads and tails, rebounded from 417 in 1963 to 9,789 in April, said the U.S. Fish and Wildlife Service. That’s about the size of the resident population of East Hampton on New York’s Long Island, according to a 2000 federal census.

“The overwhelming success of Bald Eagle recovery was made possible by a strong partnership between federal and state governments and private landowners,” President George W. Bush said in an e-mailed statement today. “The eagle will continue to flourish under federal protection through the Bald and Golden Eagle Protection Act.”

Bald Eagles also remain protected under the Migratory Bird Treaty Act. Hawaii has no Bald Eagles and Alaska has a healthy population estimated at 40,000 birds, according to the Fish and Wildlife Service Web site. Environmentalists said they will keep monitoring the birds and their habitat.

“We’ll be asking the Fish and Wildlife Service to strongly enforce the Bald and Golden Eagle Protection Act,” said Mike Daulton, director of conservation policy for the National Audubon Society.

Bald Eagle nesting pairs usually mate for life. They fell prey to collectors and trophy hunters, habitat destruction and ranchers and farmers who considered them a threat to livestock. Pesticides such as DDT dangerously thinned their egg shells, Nicholas Throckmorton, a Fish and Wildlife agency spokesman, said in a telephone interview yesterday.

“We really have to celebrate the genuine victories,” said John Fitzpatrick, director of the Cornell Laboratory of Ornithology in New York. “It’s certainly a bird we don’t want to declare victory on and never think about it again.”

Treasury Secretary Henry Paulson, who was chairman of the Nature Conservancy’s board before he took office in 2006, stood with Eagle Scouts behind him after Challenger glided low over the crowd and swooped down to a handler at the bottom of the memorial’s steps.

“I haven’t had a ceremony like this since I’ve been in Washington,” Paulson said, with a laugh. “As a lifelong birder, though, this is very inspiring.”

The raptor, whose image appears on the U.S. dollar bill, can live 15 years to 25 years in the wild and longer in captivity. Their nests in tall trees weigh as much as 1,000 pounds. They hunt small prey and feed on carrion but prefer fish. Cecere said yesterday that he is happy to see the eagles’ recovery, though the bird would probably be happiest with a good meal.

The Fish and Wildlife Service in May issued national bird-management guidelines, which list information on legal protection and issues such as avoiding any disturbance of nests and feeding areas.

Environmental Defense, which waged a legal battle against the use of the pesticide DDT, said the eagles’ revival depended on several factors.

“A long and difficult recovery would not have been possible without the U.S. ban on DDT and the Endangered Species Act,” said Michael Bean, chairman of the group’s wildlife program.

Kempthorne reminded the crowd that the eagles’ recovery is one of many goals for endangered wildlife.

“We do have 1,300 species listed, and our recovery rate is about 1 percent,” he said. “I believe we can put a greater emphasis on recovery and not get to this point in the first place.”
[/av_textblock]