Jun 27, 2007 | AEF in the Media, AEF Updates & Events, All News, Challenger the Eagle, Eagles in the News, Featured Stories 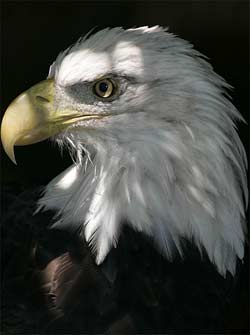 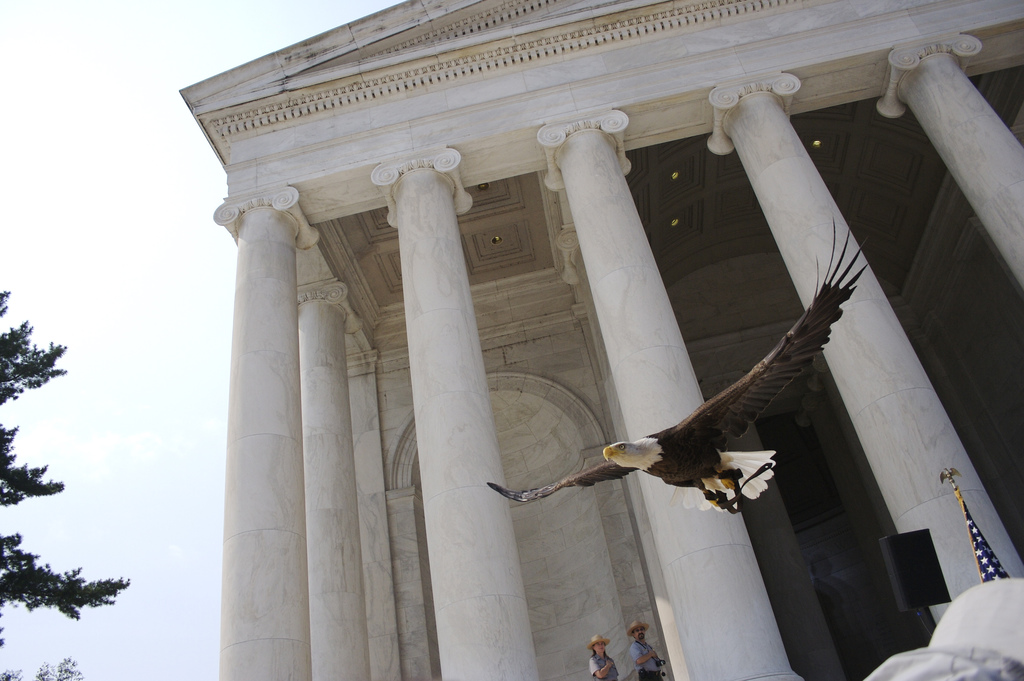 Challenger is released during an event at the Jefferson Memorial marking the removal of the Bald Eagle from the endangered species list on Thursday. Despite its new status, the bird will still be protected by state statutes and a federal law passed by Congress in 1940 that makes it illegal to kill the Bald Eagle. Photo by Win McNamee/Getty Images

The Bald Eagle was on the verge of extinction when the federal government declared it endangered in 1978 under the Endangered Species Act. Today, there are more than 9,800 nesting male-female pairs across the USA.

* – The eagle was not protected in Alaska, where there are many pairs, or in Hawaii, where there are none.  Source: U.S. Fish and Wildlife Service
[/av_textblock] [/av_one_third] [av_two_third min_height=” vertical_alignment=” space=” custom_margin=” margin=’0px’ padding=’0px’ border=” border_color=” radius=’0px’ background_color=” src=” background_position=’top left’ background_repeat=’no-repeat’ animation=”] [av_textblock size=” font_color=” color=” custom_class=” admin_preview_bg=”]

After nearly vanishing from the nation it represents, the American Bald Eagle has soared off the endangered species list.

President Bush hailed the move as a “wonderful way” to celebrate the Fourth of July.

The president credited the resurgence of the national symbol after a 40-year fight to cooperation between private landowners and federal and state governments.

“This great conservation achievement means more and more Americans across the nation will enjoy the thrill of seeing Bald Eagles soar,” he said.

Interior Secretary Dirk Kempthorne made the formal announcement Thursday at the Jefferson Memorial in Washington: “Today I am proud to announce the eagle has returned.”

“After years of careful study, public comment and planning, the Department of Interior and the U.S. Fish and Wildlife Service are confident in the future security of the American Bald Eagle,” said Kempthorne. He promised that “from this point forward we will work to ensure that the eagle never again needs the protection of the Endangered Species Act.”

Once devastated by hunting and pesticide use, the eagle has made a triumphant comeback, from 417 male-female pairs in the continental USA in 1963 to nearly 10,000 now

The eagle “is no longer in danger,” says Michael Bean of Environmental Defense, adding that its story “shows that it’s possible to bring a species back from the brink. It’s been an unqualified success.”

Despite its new status, the bird will still be protected by state statutes and a federal law passed by Congress in 1940 that makes it illegal to kill the Bald Eagle.

The U.S. Fish and Wildlife Service is developing guidelines on how that law will be implemented. It also is developing a permitting system to allow landowners to develop their property and still protect the eagle population.

Interior department spokesman Nicholas Throckmorton noted that the eagle has long since met the recovery goals that federal biologists laid out in the 1980s. The bird was supposed to leave the endangered-species list when there were 3,900 breeding pairs in the lower 48 states — a target reached in 1999.

Since then, the eagle’s population has boomed. It has moved into quarters that biologists never thought it could tolerate, such as next to an airport runway in Florida and close to a highway in Maryland.

The lesson took 200 years. The Bald Eagle was declared the nation’s symbol back in 1782, but that didn’t keep Americans from regarding it as a predator, shooting it and destroying its eggs for most of the next two centuries.

The final stroke was the introduction of the pesticide DDT, which tainted the eagles’ prey and accumulated in the birds’ tissues. It made eggshells too fragile to withstand a parent bird’s weight and killed eagle embryos.

The eagle started down a path to recovery in 1972, when the Environmental Protection Agency banned DDT. Six years later, the government declared the eagle endangered in 43 states and threatened — denoting a lower level of protection — in five. That allowed money to be spent on breeding eagles in captivity and releasing them into the wild.