On April 24, 2014, the American Eagle Foundation released a one-year-old male Bald Eagle ‘Winfield’ back into the wild.

“By itself, it’s a great, yet challenging, success story. We love seeing an eagle fly free again after being rehabilitated. This particular case, however, comes with an extremely amazing backstory that began in Alaska,” said AEF Founder and President Al Cecere.

In 1994, a female Bald Eagle in Alaska was shot in the left wing. She was declared non-releasable and transferred to the American Eagle Foundation in Pigeon Forge, TN for permanent care. The following year, a male Alaskan Bald Eagle was sent to the AEF for permanent care due to a gunshot that disabled his left wing. Unfortunately, both injuries were so severe that neither eagle could ever be released back into nature.

In 2000, these eagles, now named Franklin and Independence, chose each other as mates while residing inside the AEF Eagle Mountain Sanctuary at Dollywood in Pigeon Forge, TN. Thereafter, they were given their own private breeding compartment inside that large aviary, and laid their first eggs in 2002.  Since then, they have successfully raised 29 eaglets—all but one of which were released from the AEF hack tower (artificial nesting tower) on Douglas Lake in East Tennessee. 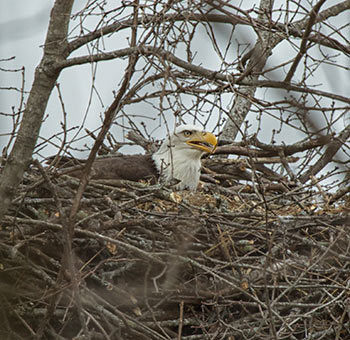 The second part of the story focuses on a pair of wild Bald Eagles who, in 2012, built a nest in a tree on Winfield Dunn Parkway close to a Kroger supermarket in Sevierville, TN.

The second part of the story focuses on a pair of wild Bald Eagles who, in 2012, built a nest in a tree on Winfield Dunn Parkway close to a Kroger supermarket in Sevierville, TN. Unfortunately, this nest was not constructed on sturdy tree limbs, and the nest and eggs blew out of the tree during a storm. The following year, the eagles built another nest in the same tree where 2 eggs were laid and hatched, revealing beautiful healthy eaglets!

Many of the nesting activities were captured by John Prickett, a photographer and volunteer for the AEF. He saw a band on the leg of the female mother eagle, and took many photographs in an attempt to get the entire number for identification. To our amazement and joy, the band number matched that of an eaglet hatched and raised by Franklin and Independence in April 2007.

This female eagle, who was recently named ‘Lady Independence’ (in honor of her mother, “Independence”), was released July 12, 2007 from the AEF hack tower. After finding a mate during her travels across the United States, the pair chose to return to the East Tennessee area where Lady Independence was raised and first learned to fly—within several miles of the hack tower where she was originally released.

The two little eaglets in the 2013 nest were thriving, and had reached the age of 6 weeks when another huge storm passed through. Unfortunately, the nest was severely damaged and both eaglets fell to the ground. John Prickett immediately checked on the nest after the storm had passed, and notified Al Cecere. Together, along with AEF staff members Michelle Bauer and Karen Wilbur, they combed through the thick thorn brush below the nest in search of both eaglets. The eaglets were found, and taken to the AEF facility for initial evaluation and treatment by AEF’s vet tech Nancy Zagaya and UT veterinarian Mike Jones. They were then placed in the AEF rehabilitation program.

One of the eaglets, named ‘Abraham,’ was deemed permanently non-releasable due to a severe wing injury. He is now being trained by the AEF staff to become an educational eagle ambassador. However, the other eaglet, ‘Winfield’ (named after Governor Winfield Dunn Parkway where the nest was located), made a full recovery after a year, regrowing all his tail feathers, and becoming strong enough to be released.

Watch Winfield’s release in the video below.

Postscript
This season, Lady Independence and her mate once again have built a new nest in the same general area (after their original nest tree was taken down by developers). This time, we believe the nest is even sturdier, and located in a more protected tree. We are happy to report that there are eaglets in the new nest— our volunteer John has been carefully observing the nest and has seen food being brought in by the parents. We are hopeful that these babies will continue to thrive and grow strong, flying free when they are ready to be on their own. Maybe one or both of them, like their mother, will return to the general area where they first learned to fly when they are sexually mature and have chosen a mate at about 4 years of age.