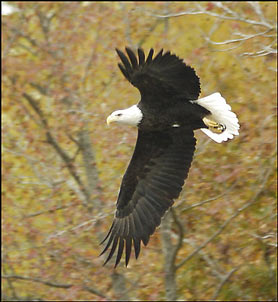 Bald Eagles, like this one shown hunting for fish along Missouri’s Wappapello Lake, have rebounded to more than 7,000 nesting pairs after their numbers fell dangerously low. (By Paul Davis — Daily American Republic Via Associated Press)

MINNEAPOLIS — Seven years after the U.S. government moved to take the Bald Eagle off the endangered species list, the Bush administration intends to complete the step by February, prodded by a frustrated libertarian property owner in Minnesota.

The delisting, supported by mainstream environmental groups, would represent a formal declaration that the eagle population has sufficiently rebounded, increasing more than 15-fold since its 1963 nadir to more than 7,000 nesting pairs.

The next challenge is to ensure the national symbol’s continued protection.

“By February 16th, the Bald Eagle will be delisted,” said Marshall Jones, deputy director of the U.S. Fish and Wildlife Service. “We’ll be clear so people won’t think, ‘It’s open season on Bald Eagles.’ No way.”

Although the majestic raptor will no longer be covered by the Endangered Species Act, two earlier laws and a few carefully written phrases are expected to balance respect for the eagle with an appreciation for property rights.

“It’s not as though we’re pulling away the Endangered Species Act and you have nothing else,” said John Kostyak, senior counsel at the National Wildlife Federation, which supports the delisting.

Kostyak called the eagle’s recovery “an amazing success story,” but said if the species’ numbers unexpectedly decline, the bird can be added to the list anew.

It was a Bald Eagle’s nest that undid Edmund Contoski. And it was Edmund Contoski who filed a federal lawsuit that prompted U.S. District Judge John Tunheim to set the February deadline for the government to act or explain why not.

Contoski’s problem, as he saw it, was the nest high in a pine on his property alongside Sullivan Lake, about 100 miles northwest of the Twin Cities. When the nest was reported to state environmental authorities, he was a few weeks away from carving out a road and several lots, hoping to make good on a family investment.

No eagles were using the nest that year — they returned later — but the discovery meant that no one could build within 330 feet. The land was suddenly useless for development, and Contoski was steamed.

He tracked down the Pacific Legal Foundation, which has a record of challenging endangered-species rules. Better yet, Pacific attorney Damien Schiff was willing to file suit for free.

For attorney and client, the case was more about principle than principal.

Contoski, 69, is not a prosperous man, although he owns his comfortable Minneapolis home free and clear. He lives with his black cat, Victor, and reads a lot. A table is piled high with such volumes as “Global Warming and Other Eco-Myths” and “The Skeptical Environmentalist.”

A former city planner, published author and founder three decades ago of Minnesota’s Libertarian Party, Contoski is not enthusiastic about government rules. During a recent ride to a restaurant, he declined to wear his seat belt despite an insistent dashboard beep.

He would not mind wearing a seat belt in a world without such laws, he explained, “but I’ll be [expletive] if I’ll wear it if the government insists.”

When he studies his Constitution, he sees a guarantee of inalienable rights.

“It doesn’t say, ‘unless eagles need a home.’ It’s unfair that we pay taxes all these years and now we can’t recoup that. If it’s public benefit, let the federal government or the state pay us for it.”

Contoski’s family bought 23 acres in 1939. The lakefront land provides gorgeous views to the far shore, about a mile away, but he sees no justification for paying taxes on property they will not use.

“I’m 69 years old and I have a heart condition. How long am I going to live?” asked Contoski, who likes to say he pays taxes and eagles don’t. “It’s not as though I’m against the eagles. If the eagles lose this tree, they’ll go to their other nests.”

Hence the lawsuit, which Contoski filed in 2005 and won in August.

A key issue was why the government had not acted. After all, it was a dramatic moment in July 1999 when President Bill Clinton stood beside a Bald Eagle at a White House ceremony and hailed “the rebirth of our proudest living symbol.”

Despite Benjamin Franklin’s dismissal of the national icon as “a bird of bad moral character” — he preferred the humble turkey — extraordinary efforts were made to keep it from disappearing from the lower 48 states.

The greatest threat to a creature with few natural enemies came from humankind, particularly with the widespread use of the pesticide DDT, which weakened eagle eggs. In time, DDT was banned, and the eagle, whose population once numbered as few as 417 nesting pairs in the contiguous United States, was added to the endangered list.

Taking it off the list has proved difficult, to say the least. The Clinton administration left office without taking action. The Bush administration promised to move on it, but those efforts also lagged.

Amid the often conflicting agendas of politics, preservation and development, experts say what now makes a compromise likely is the unexpected resilience of the eagle population and a consensus that regulations should be clear but flexible.

Environmentalists and eagle fans want to be sure eagles and sufficient habitats are protected. Developers, investors and others want continued access to building permits via various exceptions and trade offs that are not allowed under the laws that would take precedence if the eagle were delisted.

“Ultimately, what we’re trying to work toward is ensuring, if the Bald Eagle is taken off the list, people won’t see that much of a change,” said Chris Tollefson, chief spokesman for the U.S. Fish and Wildlife Service.

Rules are being polished, for example, to define activities permitted near eagle habitats and what can be done near nests that eagles are not using. A debate has been underway over what it means to “disturb” an eagle, a crucial but imprecise word in the Bald and Golden Eagle Protection Act.

“The bottom line is the delisting has been working its way through the process for a long time,” said Kostyak, who said of Contoski, “Give him credit for getting a deadline imposed.”

As for Contoski’s fortunes, he considers it unlikely that anything will change, especially now that the eagles have returned.

He is contemplating another lawsuit, this time against the remaining laws.

“From his point of view, it may be a Pyrrhic victory,” said Michael J. Bean, who leads wildlife conservation efforts for Environmental Defense. “But from an eagle’s point of view, it’s a good thing to recognize it has recovered.”

Staff writer Juliet Eilperin in Washington contributed to this report.

The Eagle Has Landed
Scroll to top