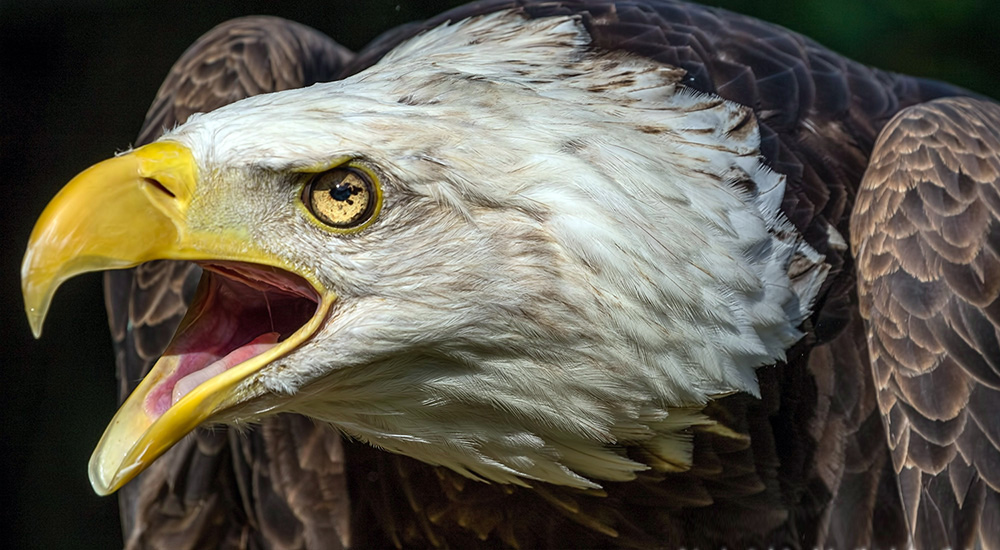 Bald Eagle Spirit has found a new home at Raptor Rehabilitation of Kentucky. Born in 1992, she had a mishap on her first fledge, sustaining a hairline fracture of her collarbone. She was rehabilitated and released, but was unable to survive in the wild due to human imprinting. Photo by Gena Flanigen. © 2017 American Eagle Foundation.

‘Spirit’ is a female Bald Eagle hatched in captivity at the John Ball Zoo in Grand Rapids, Michigan in 1992. At seven weeks of age, she was sent to a Bald Eagle hacking project just outside Nashville. She was released at twelve weeks of age. Although she was a full-sized eagle, ready to leave the nest, her first jump from the hacking tower was not very graceful and she suffered a hairline fracture in her collarbone. She was immediately taken to the American Eagle Foundation for rehabilitation.

After the fracture had completely healed, she was once again released into the wild from the Nashville area hacking tower. This time, she followed the hack tower attendant when she heard/saw the attendant coming to feed the other eaglets that were still in the tower. She then landed in the yard of the people who lived next to the hack site. She eventually flew off and out of Tennessee. Weeks later, she was found sitting on a lady’s trailer in Statesboro, Georgia, where she remained for three to four days. Georgia wildlife officials and a local falconer retrieved Spirit from the wild after she grabbed the lady’s dog in the hindquarters. Spirit, simply defending herself, was on the ground at the time when the barking dog quickly ran up to her.

Spirit was found to be very hungry and getting weaker, so she was taken to the falconer’s for temporary care and then later transferred to the AEF for rehabilitation again.

Spirit was determined to be a human imprinted bird. In 2010, during her bi-annual physical, a cataract was found in her left eye. She had laser surgery and now once again she has sight in that eye. Although her eyesight has dwindled over the years she is still a Spirited young eagle at heart.

At the American Eagle Foundation, Spirit had very limited opportunities to educate and interact with the public, as she was a “gloves only” eagle.  It was determined that the Raptor Rehabilitation of Kentucky would be a perfect fit for Spirit, where she can be an excellent glove educational ambassador.

Keep up with Spirit by visiting the Raptor Rehabilitation of Kentucky (RROKI) website. You may also donate to their facility and continue to be a part of Spirit’s family of supporters.