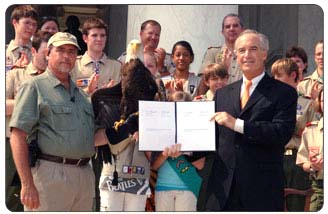 Secretary Kempthorne emphasized the ongoing commitment of the Interior Department and the entire federal government to the eagle’s continued success, noting that Bald Eagles will continue to be protected by the Bald and Golden Eagle Protection Act and the Migratory Bird Treaty Act.

WASHINGTON, D.C – Secretary of the Interior Dirk Kempthorne today announced the removal of the Bald Eagle from the list of threatened and endangered species at a ceremony at the Jefferson Memorial in Washington, D.C. After nearly disappearing from most of the United States decades ago, the Bald Eagle is now flourishing across the nation and no longer needs the protection of the Endangered Species Act.

“Today I am proud to announce: the eagle has returned,” said Secretary Kempthorne. “In 1963, the lower 48 states were home to barely 400 nesting pairs of Bald Eagles. Today, after decades of conservation effort, they are home to some 10,000 nesting pairs, a 25-fold increase in the last 40 years. Based on its dramatic recovery, it is my honor to announce the Department of the Interior’s decision to remove the American Bald Eagle from the Endangered Species List.

Kempthorne emphasized the ongoing commitment of the Interior Department and the entire federal government to the eagle’s continued success, noting that Bald Eagles will continue to be protected by the Bald and Golden Eagle Protection Act and the Migratory Bird Treaty Act. Both federal laws prohibit “taking” — killing, selling or otherwise harming eagles, their nests or eggs.

“After years of careful study, public comment and planning, the Department of the Interior and the U.S. Fish and Wildlife Service are confident in the future security of the American Bald Eagle,” Kempthorne said. “From this point forward, we will work to ensure that the eagle never again needs the protection of the Endangered Species Act.”

The removal of the Bald Eagle from the Federal List of Endangered and Threatened Wildlife and Plants will become effective 30 days after publication in the Federal Register. Upon delisting, the Service will continue to work with state wildlife agencies to monitor eagles for at least five years, as required by the Endangered Species Act. If at any time it appears that the Bald Eagle again needs the Act’s protection, the Service can propose to relist the species. The Service has developed a draft monitoring plan that is available for public review and comment.

The Bald Eagle first gained federal protection in 1940, under what later became the Bald and Golden Eagle Protection Act. The eagle was later given additional protection under the Migratory Bird Treaty Act. Soon after passage of the Eagle Act, populations stabilized or increased in most areas of the country. However, the eagle population fell into steep decline in later decades, due primarily to widespread use of the pesticide DDT after World War II. DDT accumulated in eagles and caused them to lay eggs with weakened shells, decimating the eagle population across the nation. Concerns about the Bald Eagle resulted in its protection in 1967 under the predecessor to the current Endangered Species Act. The eagle was one of the original species protected by the ESA when it was enacted in 1973.

The legal protections given the species by these statutes, along with a crucial decision by the Environmental Protection Agency to ban the general use of DDT in 1972, provided the springboard for the Service and its partners to accelerate recovery through captive breeding programs, reintroductions, law enforcement efforts, protection of habitat around nest sites and land purchase and preservation activities. The eagle responded dramatically to these actions. From an all-time low of 417 breeding pairs in 1963, the population in the lower 48 states has grown to a high of 9,789 pairs today. Fortunately, the Bald Eagle has never needed the protection of the ESA in Alaska, where the population is estimated at between 50,000 and 70,000 birds.

“It’s fitting that our national symbol has also become a symbol of the great things that happen through cooperative conservation,” said U.S. Fish and Wildlife Service Director H. Dale Hall. “Eagles could not have recovered without a support network of strong partnerships among government at all levels, tribes, conservation organizations, the business community and individual citizens.”

Concurrently with today’s announcement, the Service is making the draft post-delisting monitoring plan available and is soliciting public comment for 90 days. Comments on the monitoring plan must be received 90 days after publication in the Federal Register. Comments may be sent by mail to Bald Eagle Post-Delisting Monitoring Plan Comments, U.S. Fish and Wildlife Service Rock Island Field Office, 1511 47th Avenue, Moline, Illinois 61265. Comments may also be transmitted electronically to [email protected] or by following the instructions at the Federal eRulemaking Portal: http://www.regulations.gov.

More information about the bald eagle and the post-delisting monitoring plan is available on the Service’s bald eagle website at http://www.fws.gov/migratorybirds/baldeagle.htm.