Bald Eagle Shot in East Tennessee Cared for by the AEF 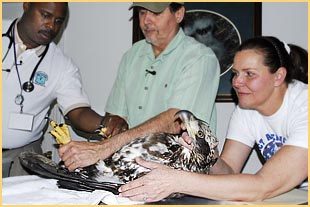 In late March 2009, an immature Bald Eagle suffered multiple wounds from a shotgun and was found by a concerned citizen in Cumberland County, TN. The Tennessee Wildlife Resources Agency was notified and they made sure the bird received proper treatment.

On April 4th, a careful examination by veterinarians at the University of Tennessee Veterinary Teaching Hospital in Knoxville revealed that numerous steel shot fragments had fractured the bird’s left wing and also damaged its toe, tail, spine and shoulder.

After the doctors at UT provided initial emergency treatment to the eagle, it was then brought to the American Eagle Foundation’s facility in Pigeon Forge on April 8th for further rehabilitation.

This eagle was recently placed in a 150 foot long flight enclosure at the AEF bird facility, where it can exercise its wings and practice flying. Due to the bird only having 80 percent of normal range of motion in its left wing, the prognosis of it returning to full flight is fair to poor. It depends on how well the wing eventually heals.

Several federal, state and private conservation groups, including the AEF,  have joined together to offer a combined $5,000 reward for information leading to the conviction of the person(s) responsible for shooting this majestic creature.

Bald Eagles are protected under federal law, and the poacher could face fines and up to a year in federal prison.

The public is urged to call the TWRA at 931-484-9571 if they can provide any information about who may have shot the bird.