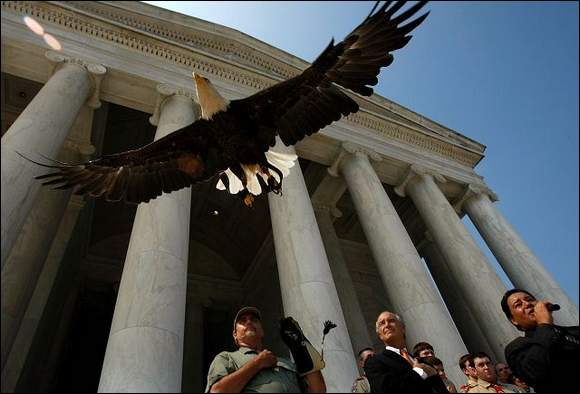 Challenger, a Bald Eagle, was released yesterday during an event at the Jefferson Memorial in Washington to celebrate the removal of the Bald Eagle from the endangered species list.
About 10,000 pairs of Bald Eagles are estimated to be nesting or breeding in the continental U.S., with the largest concentration being in the Southeast, compared to fewer than 500 in 1963. Getty Images

Interior Secretary Dirk Kempthorne yesterday announced the removal of the Bald Eagle from the list of “threatened” species, a move that President Bush called “a wonderful way to celebrate this Fourth of July” holiday.

“Today I am proud to announce, the eagle has returned,” Mr. Kempthorne said at a morning press conference at the Jefferson Memorial, one day before a court-ordered deadline for deciding whether to keep the bird on the list, under the Endangered Species Act.

“After years of careful study, public comment and planning, the Department of the Interior and the U.S. Fish and Wildlife Service are confident in the future security of the American Bald Eagle,” Mr. Kempthorne said.

About 10,000 pairs of Bald Eagles are estimated to be nesting or breeding in the continental U.S., with the largest concentration being in the Southeast, compared to fewer than 500 in 1963. The bird has always been plentiful in Canada and Alaska.

In a statement, Mr. Bush called credited cooperation between private landowners and federal and state governments for the bird’s resurgence.

“This great conservation achievement means more and more Americans across the nation will enjoy the thrill of seeing Bald Eagles soar,” he said.

The event celebrating the recovery of the national bird was filled with patriotic symbolism, including an American Indian blessing, the singing of The Star-Spangled Banner and a finale featuring a rescued Bald Eagle named Challenger flying to the shore of the Potomac.

Animal conservationists see the eagle’s recovery as a vindication of the Endangered Species Act, which covered the bird that Thomas Jefferson suggested be used as the U.S. national symbol.
[/av_textblock]