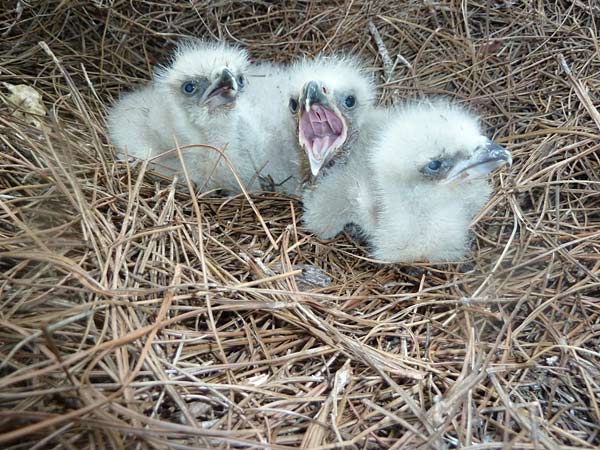 THE THREE AMIGOS…All 3 Bald Eaglets hatched in the nest of non-releasable parents ‘Franklin’ & ‘Independence’ at the American Eagle Foundation center at Dollywood on April 29, May 5 and May 6 respectively. You can view the little tikes and their parents caring for them at WWW.EAGLES.ORG (day or night).

“During the high winds and intense thunder showers, I intently watched the eagle nest day and night from a video camera available over the Internet,” said AEF President Al Cecere. “It always amazes me how the parent birds faithfully cover the eggs and young with their body and wings during severe weather, even when chunks of hail are pounding on their backs.”

The first of three eggs laid in March, which both parents have been diligently incubating and shielding from inclement weather over the past several weeks, hatched on the day of the Royal Wedding (April 29). The second egg and third eggs hatched May 5 and 6 respectively.

The most intimate nesting activities of these majestic birds are under a microscope lately, as the conservation group has established a live-streaming Eagle Nest Cam which can be viewed from their www.eagles.org website.

At about 5 or 6 weeks of age, all the eaglets that hatch in the nest will be moved to an artificial nesting tower located on Tennessee’s Douglas Lake. They will be released into the wild at 13 weeks of age after they’ve grown to full size.

“We invite anyone who loves animals, birds, nature and America to drop by our website (www.eagles.org) to watch and enjoy these wonderful birds,” said Cecere. “We’re even open to suggestions from our viewers regarding any possible names for the babies.”

Both parent birds suffered permanent disabilities to one wing due to gunshot wounds.