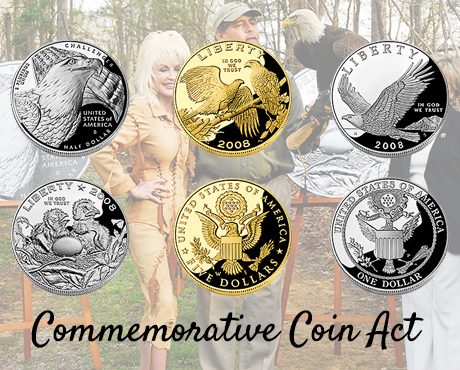 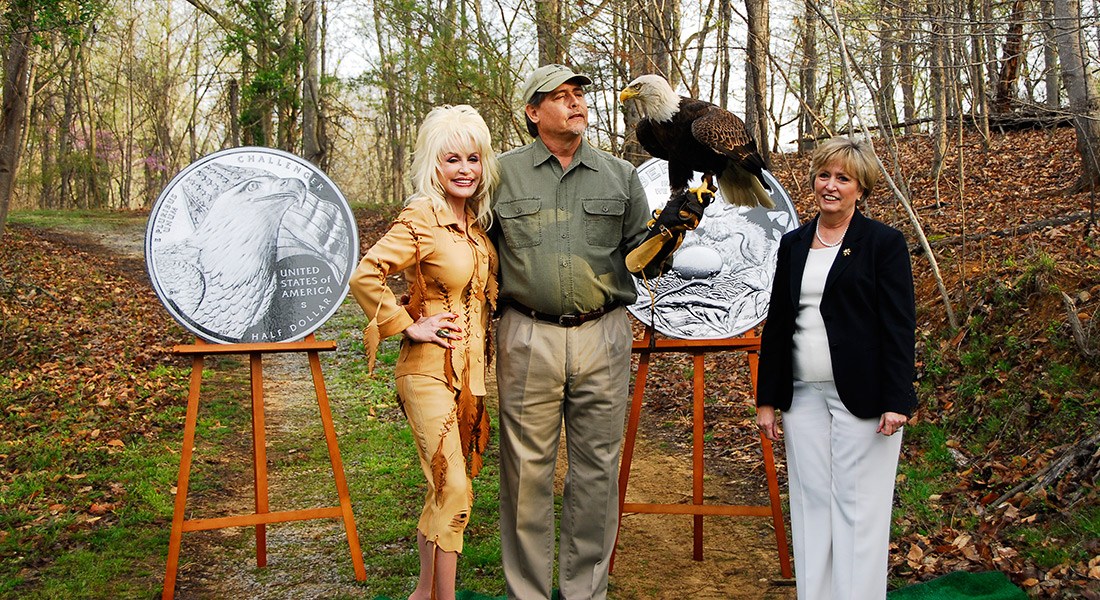 In 2008, the US Mint issued commemorative coins celebrating the comeback of the Bald Eagle. AEF is authorized to use the money from the sale of these coins to further the work of the American Eagle Fund. Shown here are Dolly Parton, Al Cecere, & Challenger, and Gloria Eskridge, Associate Director for Sales & Marketing for the United States Mint.

In order to fund ongoing Bald Eagle conservation, the American Eagle Foundation conceived a plan that would create an endowment source to support this initiative for years to come. The project was for the U.S. Mint to create a coin set—3 coins of gold, silver, & clad. Proceeds from the sale of these coins would be used to provide funding for grants that would protect the Bald Eagle and their habitats into the future.

This ambitious undertaking took a monumental effort and years of work to accomplish.

First, a Coin Bill to fund Eagle conservation would have to be passed in both Houses of Congress—no easy task. All during 2006 and 2007, the American Eagle Foundation and Challenger made countless trips to Washington, D.C. to visit Senators and Congressmen. The AEF was very fortunate to have two very good friends from Tennessee in Congress: Senate Majority Leader Bill Frist and Senator Lamar Alexander. Both enthusiastically supported this initiative and helped AEF gain support among other members of Congress.

“I received a call from a senior member of the Senate, Robert Byrd,” exclaimed Senator Alexander, a cosponsor of the bill. He said, “I have an eagle in my office. May I be on the bill?’ Now, Senator Byrd had never called my office before.”

AEF senior staff and Challenger made many visits to individual Senators and Congressmen. With no appointments, an AEF staff member and Challenger would walk into a Senator or House Member’s outer office—quite often full of people waiting to see that particular Member of Congress. At that point, regular activity in the office just ceased as everyone’s attention was focused on a real live EAGLE! It has often been said that “Challenger opened doors!” No one could refuse entry to a majestic Bald Eagle, and so Challenger, along with the AEF staff member,  rather quickly moved to the front of the line. Photo sessions with “the eagle” would invariably follow, and after an explanation about what the money would be used for, Senators and House members quickly became convinced that they should support the Coin Bill.

Without the presence of Challenger making the rounds with AEF staff, we could have never been able to gain such universal support for the Coin Bill. Eventually the bill did get put to the floor, was voted on and passed UNANIMOUSLY in both Houses. Bill Frist, the Republican majority leader from Tennessee, remarked on the Senate floor at the time, “No Senate or House member can say no to that beautiful bird, that beautiful symbol of the United States of America. Why, it would have been tantamount to booing The Star-Spangled Banner.” President George W. Bush signed the Coin Bill into law in December of 2008. The coins were sold publicly in 2009, and have raised about eight million dollars for our fund.

Three coins were meticulously designed for this commemorative edition: 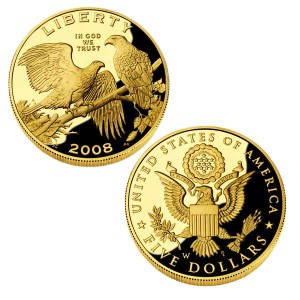 The Obverse side of the coin shows two young eaglets resting on a branch in their natural habitat. The Reverse side of the coin features the current Great Seal of the United states. Unfortunately, both Proof and Uncirculated versions of this coin have completely sold out and it is no longer available. 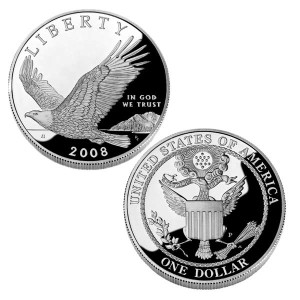 The Obverse side of the coin features a mature bald eagle soaring in flight. The Reverse side shows the Great Seal of the United States as it appeared from 1782 -1841. The coin is available in either Proof or Uncirculated. 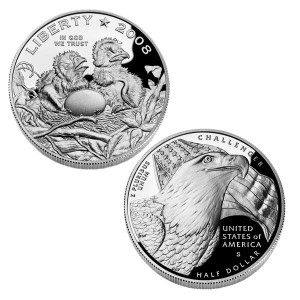 On the Obverse side of the coin, two baby eaglets are settled in a nest with an unhatched egg. On the Reverse side of the coin, Bald Eagle Challenger is shown with the American Flag in the background. This is the first time in our country’s history that the likeness and name of a specific famous animal (or eagle) has appeared on official legal tender United States coinage. The coin is available in either Proof or Uncirculated.

The coins are no longer available through the U.S. Mint (sales ended in December 2008), but the American Eagle Foundation (AEF) now has a limited supply of these valuable collectibles available for sale – including the impressive half-dollar clad coin featuring the majestic image of Challenger.

How The Endowment Fund Has Been Used

The Coin Act authorized surcharges collected from the sale of collectible Bald Eagle Commemorative Coins to be paid to AEF of Tennessee “to further its works,” which includes grants for Bald Eagle Projects.

The U.S. Mint’s 2008 Eagle Coin sales yielded $7.8 million in surcharges. Seventy-five percent of the monies, $5.8 million, were earmarked in the American Eagle Fund. This Fund supports priority Bald Eagle projects within the USFWS Regions  of the United States. Projects may be conducted by state, federal and private agencies or parties.

To date, the American Eagle Foundation has awarded over $700,000 in grants to help ensure the continued recovery of the Bald Eagle. Grants were first awarded in 2012, with about $100,000 awarded yearly (no awards were granted for 2013 due to a downswing in the economy).