Are Eagles Ready to Leave Nest? 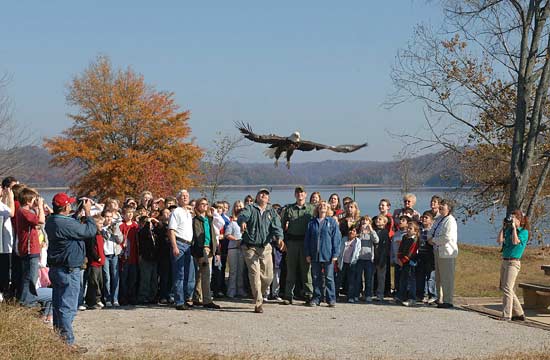 A rehabilitated Bald Eagle flies from the arms of Al Cecere of the American Eagle Foundation as students and U.S. Fish and Wildlife Service and Army Corps of Engineers officials watch Nov. 9 at Dale Hollow Lake. (DAVE TREADWAY / U.S. ARMY CORPS OF ENGINEERS)

Plan to remove bird from ‘threatened’ list worries some.

Bald Eagles have been seen soaring around Middle Tennessee, including Sumner, Wilson and Williamson counties, but a plan to remove them from protection of the U.S. Endangered Species Act worries some experts.

Changing the status of the nation’s symbol, which appeared on the first list of endangered plants and animals almost 40 years ago, gives pause, even to those who say the time has come.

“I kind of have mixed feelings,” said birder Chris Sloan of Nashville, who has watched as dozens of eagles descend at dusk into a roost along the Tennessee River.

He knows, also, that the distinctive birds fly around Old Hickory, J. Percy Priest and Dale Hollow lakes and can be spotted along the Cumberland and Harpeth rivers.

“I always want more protection, but they have recovered so well at this point,” he said, adding a bit reluctantly, “Probably, based on their numbers, it’s warranted.”

The Bald Eagle – a large bird steeped in patriotism – claims the hearts of many around the country, including those who might otherwise have little interest in a species tottering on the brink of extinction.

The U.S. Fish and Wildlife Service, which is poised to delist the bird in mid-February, hopes the investment the public has in Bald Eagles will transfer to other animals and plants.

“Once they have recovered, it’s time to get them off the list and put the effort toward other species facing extinction,” said Valerie Fellows, spokeswoman for the agency in Washington, D.C.

Only 20-30 Puerto Rican parrots, for instance, remain in the wild, she said. Others in trouble include types of songbirds, mussels and orchids.

By 1963, the Bald Eagle, which had disappeared from Tennessee, had dropped to an all-time low of 417 nesting pairs in the lower 48 states.

DDT and similar pesticides had taken a toll as they spread through the food chain. The chemicals weakened the eagles’ eggshells, so that they broke when the birds sat on them. DDT was banned in the early 1970s, and programs were begun later to release just-hatched eagles brought from Alaska and elsewhere.

Today, the state’s year-round population is about 60 nesting pairs and growing, and they are joined when the weather turns cool by eagles from Northern climes, says Bob Hatcher, retired from the Tennessee Wildlife Resources Agency and considered key to Bald Eagle restoration here.

Between 300 and 500 eagles have been counted in Tennessee during winter.

Still, Al Cecere, president of the not-for-profit American Eagle Foundation, based at Dollywood in East Tennessee, sees pitfalls with delisting.

“It is not fully recovered,” he said. “When eagles lose their coveted Endangered Species Act protection, they will also lose what little government funding they once had.

“Eagle groups and agencies should not have to resort to panhandling to watch over and help sustain our national bird.”

Fellows, though, says the species is “fully recovered.”

By 1995, Bald Eagle populations had risen and they were shifted from endangered to threatened status on the federal list.

Four years later, USFW proposed taking the bird off the list. The goal of 3,900 nesting pairs nationwide had been reached, Fellows said.

Since then, seven years have passed as controversy flared and USFW worked on draft guidelines required for monitoring the species for five years after delisting.

And, because eagles don’t reach breeding age until age 4 or 5, thousands more are queued up for reproduction.

“The population can only go up,” she said.

The eagle, she said, has additional oversight through laws that include the Bald and Golden Eagle Protection Act of 1940, which is up for modification that could strengthen it.

“When they’re delisted, we hope and expect there will be very little difference in how we manage eagles,” Fellows said.

A property owner in Minnesota is driving the delisting. He has had an eagle nest on property that he wants to develop, Fellows said. He sued, and the court ordered the USFW Service to take action, one way or another, by Feb. 16.

Cecere, of the American Eagle Foundation, believes the delisting could bring other court challenges that could undermine recovery, as could continuing development of the nation’s rural areas.

“You know there are going to be some cracks in the windowpane once they don’t have the Endangered Species Act protection anymore,” he said.

The foundation is best known, perhaps, for the eagle Challenger, which blew out of a nest when young and has appeared on behalf of eagles everywhere.

It has swooped onto the field at hundreds of baseball and football games nationally – several times when the Tennessee Titans have played – and has taken part in ceremonies at the White House, where Cecere has pushed for support of eagles and other birds of prey.

The foundation, in the face of the delisting, is working to encourage corporate sponsors to help monitor and preserve eagles and their habitat nationwide. It recently created a dedicated endowment and hopes to raise $100 million to watch over the national bird.

Sloan, an attorney with Boult Cummings, said he saw his first bald eagle 23 years ago at Reelfoot Lake in West Tennessee.

“I’ll never forget it,” he said. “The lake was frozen solid. We saw several sitting on the ice, walking around, slipping and sliding.”

That sight as a youth on a Cumberland Museum trip put him on the road to being a birder.

Today, even with the number of eagles flying and years of accumulated knowledge of a host of other birds, he can’t yawn at the country’s favorite avian.

But he’s for moving on.

“I hope if those resources aren’t dedicated to the eagle, they’ll go for others that need listing,” he said.