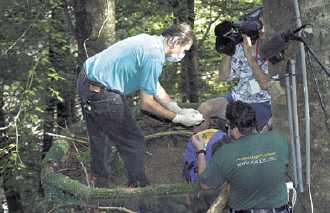 Al Cecere check baby eaglet in nest of Liberty and Justice at the American Eagle Foundation in Pigeon Forge, TN.

PIGEON FORGE – Dollywood-based American Eagle Foundation will be featured on an upcoming episode of Animal Planet’s “That’s My Baby.”

“This is an opportunity for the Foundation to tell the story of our breeding program,” said Al Cecere, AEF president. “We’ve taped quite a few behind-the-scenes activities at the breeding center.”

The episode will take viewers through the birth and release of one of the center’s bald eaglets, Screaming Eagle. Its parents, Liberty and Justice, have bred bald eagles for the foundation for more than a decade.

“They breed every year,” Cecere said. “They’ve produced quite a few young for us.”

The episode shows how the foundation’s staff care for the eggs from before they hatch to the eagle’s release over Douglas Lake.

“It will be a whole half-hour episode,” Cecere said. “Typically they run a number of times once they’re on, so it’s great exposure for the Eagle Foundation and Dollywood.”

Most of the episode will focus on the breeding and educational aspects of the AEF, with scenes from the breeding center, hack tower and programs at Dollywood.

“Typically we don’t do stories that involve birds,” said Tiller Russell, associate producer at Animal Planet. “Normally we do mammals.”

Russell said it is easier to make a personal connection with the drama involved in baby mammals than birds, but that the situation here was interesting enough to justify an episode.

“We’ve been wanting to do the story for about a year,” he said. “It just sounded like a very interesting and unique story.”

The new season for “That’s My Baby,” starts next month, so Russell said it won’t be long before it airs, and it will air often.

“It will rerun a bunch,” he said. “Twenty to 30 times. (That’s My Baby) is one of the top rated shows that Animal Planet has.”