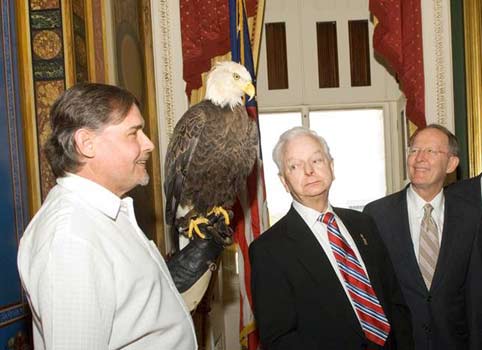 WASHINGTON June 6, 2008 – The U.S. Senate has unanimously passed a resolution authored by U.S. Senator Lamar Alexander (R-Tenn.) that designates June 20th as ‘American Eagle Day’ and calls attention to the 2008 Bald Eagle Commemorative Coin Program which could raise over $10 million for the Tennessee-based American Eagle Foundation. Senator Robert C. Byrd (D-W.Va.) is the lead Democratic cosponsor of the resolution.

“American Eagle Day provides a good opportunity to commemorate and recognize the great recovery story of the Bald Eagle, which rebounded in the lower 48 States from only 417 nesting pairs in 1963 to almost 8,000 nesting pairs in 2006,” Alexander said. “Now the Department of the Interior has officially delisted the Bald Eagle from both the ‘endangered’ and ‘threatened’ species lists under the Endangered Species Act. I’m also excited that the Bald Eagle Commemorative Coin Program has been such a success. So far, it’s raised over $5 million for the American Eagle Foundation in Pigeon Forge to make sure we continue to protect our national symbol.”

“‘American Eagle Day’ serves as an opportunity for Americans to celebrate the ideals represented by the Bald Eagle, and to recognize the remarkable recovery of this beautiful species,” said Byrd. “On June 20th, I also encourage all Americans to reflect on the principles our great nation was founded upon, and to embrace the American spirit of pride and patriotism. Let us all soar like the eagle on this momentous day.”

In addition to designating June 20th as American Eagle Day and celebrating “the recovery and restoration of the American Bald Eagle, the national symbol of the United States,” the Alexander resolution (S. Res. 583) encourages educational entities, businesses, conservation groups, government agencies and others to collaborate on information about Bald Eagles for use in schools.

The measure also highlights the U.S. Mint’s Bald Eagle Commemorative Coin Program, which could raise over $10 million for the American Eagle Foundation to support efforts to protect the Bald Eagle. So far, almost half of the eagle coins have been sold, raising over $5 million for the Tennessee-based foundation. The U.S. Mint will continue selling eagle coins through the end of 2008. The eagle coin program was created by legislation introduced in the Senate by Alexander – the American Bald Eagle Recovery and National Emblem Commemorative Coin Act – which was signed into law in December 2004.

The dramatic recovery of the Bald Eagle population is an endangered species success story and inspirational example for other wildlife conservation efforts around the world. In 1963, the number of nesting pairs of Bald Eagles in the lower 48 States had dropped to about 417. By 2006, that number had increased to approximately 7,000 to 8,000 nesting pairs. Because of this success, the U.S. Department of the Interior officially delisted the bald eagle from both the “endangered” and “threatened” species lists under the Endangered Species Act on June 28, 2007.

More information regarding the American Eagle Foundation is available at www.eagles.org.