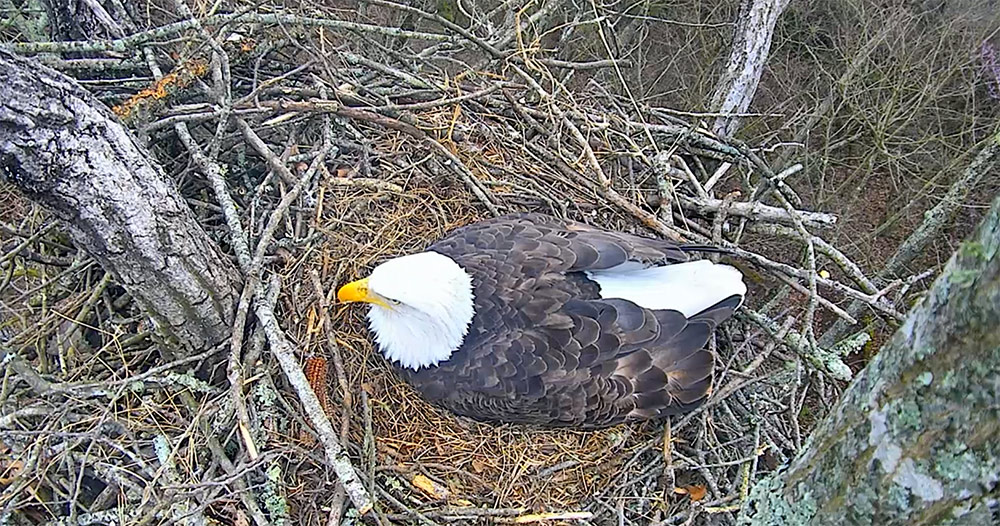 In the Fall of 2011, a female Bald Eagle, now named Lady Independence in honor of her mother, returned to her general natal nesting area with a mate. Only 5 miles from the American Eagle Foundation, this pair built the the first of several nests in Sevierville, TN.

Lady Independence was released into the wild on July 24, 2008 at 13 weeks of age, from our hack tower on Douglas Lake, and is now approaching 10 years old.Lady’s original mate was named Sir Hatcher in honor of AEF friend, mentor, and supporter Bob Hatcher, the man who made the AEF’s hacking program possible in the early 1990s.

In the winter of 2018,  local photographer Charles Collins contacted Al Cecere, AEF President, to inform AEF that there was a new male adult bald eagle seen perched with Lady Independence at the nest, and this eagle was also wearing a metal leg band.

In the slideshow below, Sir Hatcher II is seen rolling the eggs and looking straight up at the camera!  Three slides show a “shift change” when Sir Hatcher comes in to relieve Lady Independence, who is shown brooding the eggs.

We have no idea where the original Sir Hatcher is, whether something happened to him, or whether Lady simply changed mates. Eagles typically mate for life, but in rare cases, they will change mates.

AEF records show the new male, now approximately 6 years old, was brought to AEF in 2012 because he failed to fledge from his wild nest located in Marion County, TN. The eaglet was placed in AEF’s Douglas Lake hack tower and was released at approximately 14-16 weeks old. The eaglet was named Chattanooga at the time of the release, was given patagial tag of B2, and USFWS band # 629-43867.

To continue honoring the contributions of Bob Hatcher to the restoration of the Bald Eagle in Tennessee, the new male will be named Sir Hatcher II.

What We Still Don’t Know

A third adult eagle has been seen at the nest, but we do not know whether this is a male or female. The nesting pair (Independence and Sir Hatcher II) have generally been tolerant of this eagle when it perches in the nest tree; however, at other times, it has been driven away from the nest. Could this possibly be the original Sir Hatcher? We just don’t know.

Challenger, An Inspiration for All Eagles Fans