Pigeon Forge, TN – – The non-profit American Eagle Foundation (www.eagles.org) was recently recruited by the U.S. Fish & Wildlife Service and an environmental consulting firm to participate in a special Bald Eagle egg rescue operation in Florida that has made the Orioles very happy…the baseball team that is.

In early February, the ball players from Baltimore plan to migrate to Sarasota for their 2011 spring training, but a family-minded eagle pair apparently wanted to reserve the best skybox in the ballpark ahead of time.

The “urban birds” recently built a new nest atop a 135-foot light pole located in the right outfield of Ed Smith Stadium where a $24 million renovation is aggressively underway with a tight spring deadline for completion. The construction activities include 150 workers and a fleet of noisy heavy equipment continuously moving about the sports complex.

Florida wildlife officials believe the same eagle pair fledged eaglets last year from a nest they had built on a cellular phone tower about a quarter mile away from the stadium site. 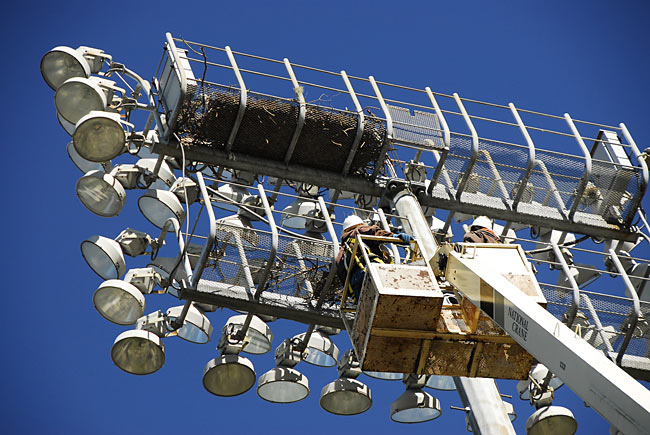 This unexpected new nest, had given construction crews, eagle experts, county officials and the Orioles valid reason(s) to be concerned, since federal/state laws and management guidelines, including the Bald & Golden Eagle Protection Act, prohibit disturbing the National Bird and their chosen nesting site.

State and federal wildlife officials worked closely with the Orioles and other interested parties to ensure there will be a happy ending for everyone involved and affected – including the majestic eagle pair and their yet-to-hatch youngsters.

Federal and state permits were issued to the Orioles and their consulting firm, Cardno ENTRIX, to remove the eggs and cover the nest with a tarp in order to prevent the birds from returning there again. The tops of other light poles at the stadium were also modified to discourage future possible eagle nesting.

“If the eggs had hatched in that location, the eaglets would have experienced substantial noise disturbance while in the nest from continued construction and regular baseball activities,” said American Eagle Foundation founder/president Al Cecere. “They’d also potentially encounter serious hazards after fledging, especially when learning to fly and searching for food in that area, due to concentrated auto and truck traffic and masses of people attending on-going stadium events. This could put them at a high risk of being harassed, injured or killed.”

AEF staff members, led by Cecere, traveled to Sarasota from Pigeon Forge last Monday in an RV with generators, incubators and other equipment needed to safely retrieve the fragile eggs and transport them to Tennessee. On Tuesday morning, the eggs were removed and taken to the AEF’s United States Eagle Center at Dollywood to be monitored and hatched. Any chicks born will be raised with minimum human contact for eventual release into the foothills of the Great Smoky Mountains.

“Since it’s early in Florida’s eagle breeding season, the adult birds could still possibly lay a second clutch of eggs at a different more ideal nesting location – even the nearby cell tower nest,” said Cecere. “So, eagle populations in both Tennessee and Florida could potentially benefit from removing the eggs early in the nesting cycle”.

The female eagle had recently laid two eggs around Dec. 4th, when the pair was first observed by wildlife experts to be sitting tight to their nest.  Bald Eagles typically lay one to three eggs annually, usually a couple days apart, and the incubation period is about 35 days. As of 2009, there were about 1,340 active nests in Florida and 91 active nests in Tennessee.

“Over the years, our conservation group has hatched and raised many eaglets for release into the wild,” said Cecere. “We’re hopeful these eggs are viable and fertile and will hatch soon after we enter the New Year. If that happens, the eaglets could likely be released by early April.”

Once hatched, the eaglets would either be fed by human-operated eagle puppets or by non-releasable eagle foster-parents housed in captivity at the AEF facility. At 6 weeks of age, the young birds would be placed in an artificial nesting tower overlooking Douglas Lake in East Tennessee, and would be released at about 12 or 13 weeks of age. Prior to their release, they’d be equipped with USFWS leg bands, tail-mounted radio tracking transmitters, and colored/numbered patagial ID tags on one wing that can easily be viewed from a distance.

“We’ve received a number of bird rescue calls over the years, but this is certainly one of the most unusual ones,” said Cecere. “This is a special and worthwhile project to cap off our 25th Anniversary year.”
###
For more information contact AEF Founder & President Al Cecere at: al@eagles.org.

Established in 1985, the American Eagle Foundation (AEF) is a not-for-profit charitable organization dedicated to the recovery, protection and preservation of the Bald Eagle and its habitat. The Federal and State-licensed organization conducts environmental, ecological and eagle-focused education programs, and operates the world’s largest bald eagle exhibit and breeding facility. Since 1995, the AEF has appeared coast to coast with its trained, free-flying Bald Eagle ‘Challenger,’ including at the White House, U.S. Capitol Building, Pentagon and various high-profile sporting events such as the World Series, Olympics, AFC Championship, Fiesta Bowl, Men’s Final Four, BSC National Championship and NFL Pro-Bowl.

Tennessee had no successful Bald Eagle nests for 22 years between 1961 and 1983. In order to restore nesting, the Tennessee Wildlife Resources Agency, American Eagle Foundation, and their partners have released a total of 330 young Bald Eagles from 7 Tennessee hack sites from 1980 through 2010. The AEF has released 105 of these 330 Bald Eagles at Douglas Lake of East Tennessee from 1992 through 2010. Successful nesting resumed in Tennessee in 1983, and has gradually increased from 0 to at least 91, producing more than 160 young in 2010. Tennessee-released Bald Eagles and their offspring are also nesting in several other states, documented as far away as northern Ohio near Lake Huron.

Titans Fans Will Get Different Fly-By At Tonight’s Game