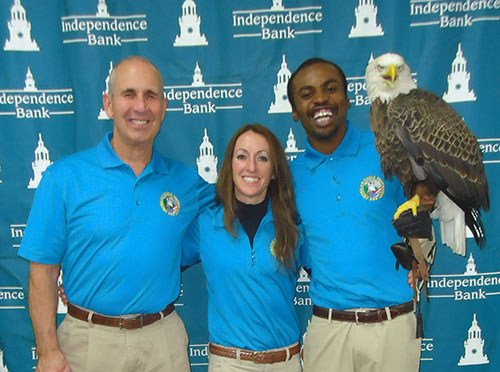 One of the ideas was prompted by Brent McCarty, a former employee of the American Eagle Foundation, who now works for Kentucky Fish and Game. Brent’s love for birds of prey is quite contagious, and inspired one of the groups to suggest a rescue and rehabilitation center for birds of prey and other wildlife species. Animals that could not be released, but were otherwise healthy, could then be used in educational programs for local schools and other community organizations.

As a demonstration of the educational impact of a bird of prey, the eagle ‘Challenger,’ the AEF’s famous free-flying non-releasable Bald Eagle, was invited to appear at the event. He was joined by AEF staff members Mike Acuff, Rob West, Rebecca Krebs, and Brent McCarty.

Afterwards, Challenger was taken to a local school where students were given an up-close and personal look at him. The children were elated and learned about the importance of protecting wildlife of all kinds. Next, Challenger visited a Veteran’s retirement center. Mike Acuff explained Challenger’s life story and the AEF’s mission. Challenger was personally shown to each of the service men and were given the opportunity to get their individual photo with the majestic bird. The servicemen were very grateful to see a Bald Eagle, our Nation’s Living Symbol of Freedom, up close. Some of the Veteran’s were even moved to tears.

At the Independence Bank award ceremony, Challenger flew over the crowd as a representation of the powerful educational value of non-releasable wildlife. Of course, he was a huge hit! The Rescue and Rehabilitation idea received a $10,000 grant to get their project underway. Additionally, many of the other groups were also awarded cash prizes and a total of $100,000 was given to sustain their initial phase of development. Independence Bank is to be applauded for this truly generous gift to their local communities.

Challenger is deeply admired and serves to educate all those who have the opportunity to meet him. The AEF is honored to have him as their primary celebrity Bald Eagle ambassador!