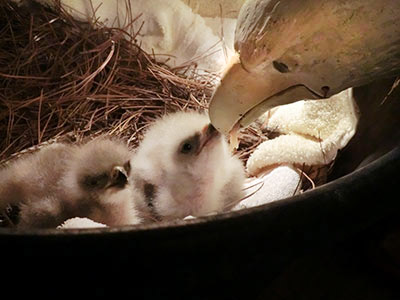 New-born eaglets are sometimes fed by a puppet eagle if they have hatched in an incubator before being placed in a nest with foster parent eagles.

PIGEON FORGE (WATE) – In a small, tucked away corner of Sevier County near one of the most popular amusement parks in the country, a group of dedicated workers is helping our national symbol – the Bald Eagle.

Once on the endangered list, the Bald Eagle is back. Still, it faces dangers, both from nature and from man.

And that’s the reason the American Eagle Foundation was created.

We visited their facility recently for an up close and personal look at the work there.

We arrived at feeding time. A small, fragile little bird was being fed watered-down salmon. 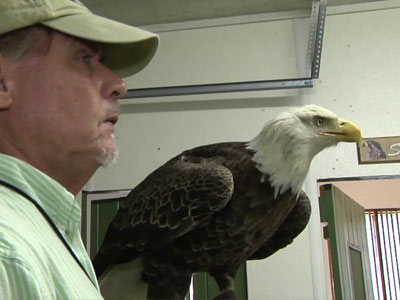 Among the great treasures here is Challenger, perhaps the most famous Bald Eagle in America

The eaglet was being hand-fed using a puppet to simulate a mother eagle.

Al Cecere is President of the American Eagle Foundation.

“The eagle we showed you today is two days old. It was hatched from one of our eggs here, produced by one of our non-releasable breeding pairs. That bird will be 12 weeks old when it flies away over Douglas Lake, so it will grow very quickly,” Cecere told us.

The eaglet, weighing just ounces now, will one day grow into the magnificent bald eagle – our nation’s symbol – and until 2007, an endangered species. 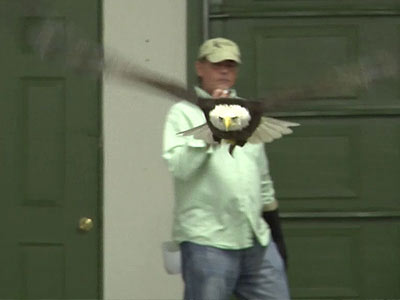 It came off the list because of people like Al Cecere, who founded the American Eagle Foundation in 1985.

It’s a facility that receives no state or federal funding and relies heavily on corporate giving. Dollywood is one of its biggest contributors.

The land where Cecere and his staff do their work is Dollywood’s property.

“We’ve been here for a number of years,” said Cecere. “They built this for us, spent millions building a center we wanted to accomplish our education, breeding and rehabilitation programs.”

Today, the center cares for up to 80 birds of prey daily. Within the walls of the buildings are eagles, owls, hawks and falcons. Some hatched here, while others are here because of injuries.

For example, we saw an eagle that brought to the center with a gunshot wound from Hamilton County.

Once rehabilitated, many of the birds will be released back into the wild. Some, because of injury or behavior, though, are non-releasable.

Among the great treasures here is Challenger, perhaps the most famous bald eagle in America.

It’s been on TV and gained a legion of fans.

Despite the years, Cecere says his passion for the work is as great as it has ever been.

“Even in the early days when there was very little money or any resources to continue what we were doing, it was my passion that kept me going. And it was a dream God put in my heart. I believed he would provide every step of the way, and he did,” he said.

That passion to keep his dream alive is very much a part of the Spirit of East Tennessee.
[/av_textblock]