As June 18 approached, signaling another AEF Reunion combined with American Eagle Day, excitement built to over-the-top levels!  Emails and Facebook posts lit up the Internet—filled with anticipation as to what these three days would bring.

Finally, everyone participating in Reunion had arrived! Reservations for the Reunion topped out at 100, with more on the waiting list.

On Thursday morning, June 18, we met at Patriot Park for instructions, and then carpooled to AEF headquarters.  It was, of course, like ‘home town week’—with hugs, and smiles, and a million photos for memories to savor. 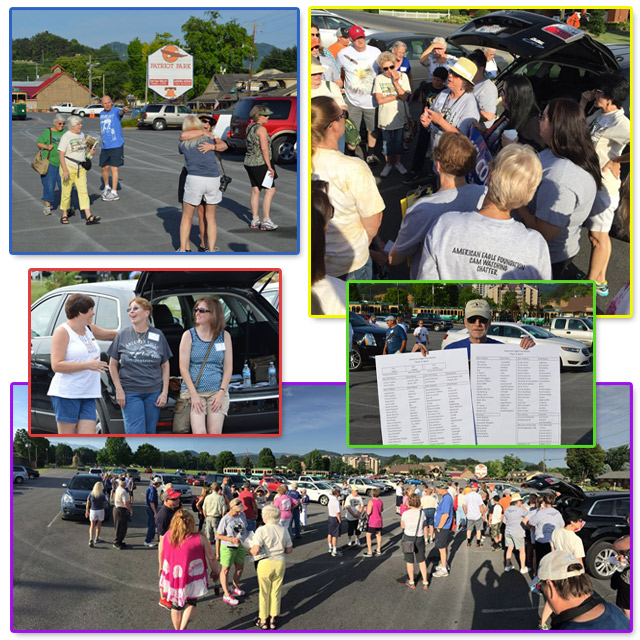 Whether a Chatter was a first-timer or an experienced visitor, all were thrilled to see AEF birds, their facilities, the store, and an up close & personal opportunity to see America’s Bird, Challenger, exercise in the barn. 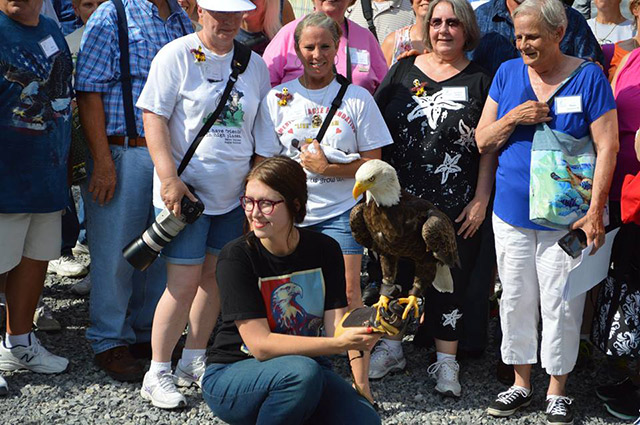 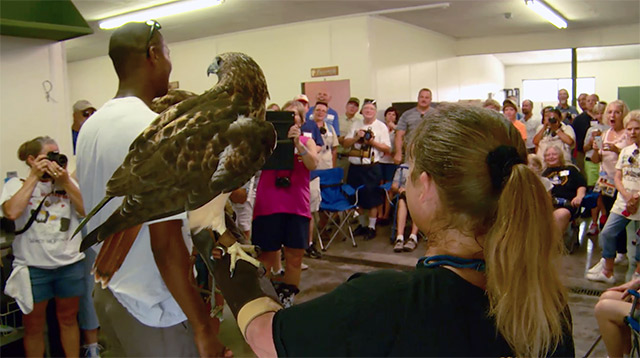 Christian Knatt and the Red-tailed Hawk captivate the Chatters. 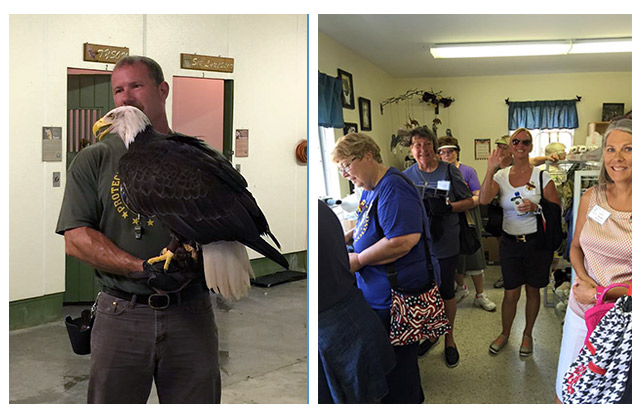 (L-R) Spencer Williams and Bald Eagle Mr. Lincoln. Chatters line up to get goodies from the AEF store.

Waiting to watch Challenger fly inside the barn.

Another photo op for Chatters during a bird presentation.

First-timers gather for a photo op. 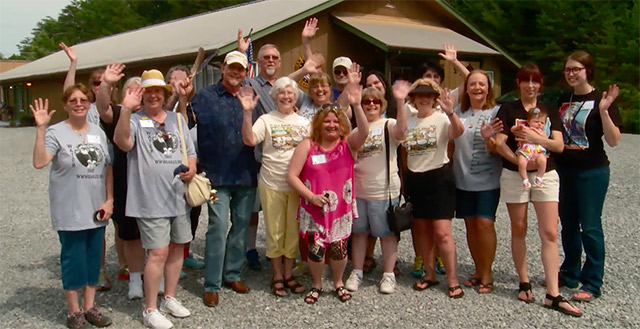 Thursday culminated with the Dinner / Auction / Raffle at Honeysuckle Hills – a favorite gathering place for chatters for the past 4 years.  A delicious meal was served, and then the raffle and auction was held. A huge thank you to Joleen Maiden, Reunion organizer, Henry Slusher, Auctioneer, MarthaAnn Madigan (Record Keeper), and to everyone who contributed to this effort.  Beth Parker also was a star in her own right as she coaxed the bidding higher and higher!

Highlights of the auction were two unannounced items: A professional photo with Al and Challenger, and the opportunity to take an eaglet to the Hack Tower and assist with banding. Bidding reached record levels as Chatters competed for these rare opportunities. The three high bidders who were awarded the photo shoot were Marcia Fairchild, Susan Rintz, and Nancy Bond.

Those making the trip to the Hack Tower and assisting with the weighing, banding,  feeding, and settling ‘Little E’ in his spacious new compartment were Ginny Cataldo, Linda Koen, Lois Zillmer, and Joni Henderson. 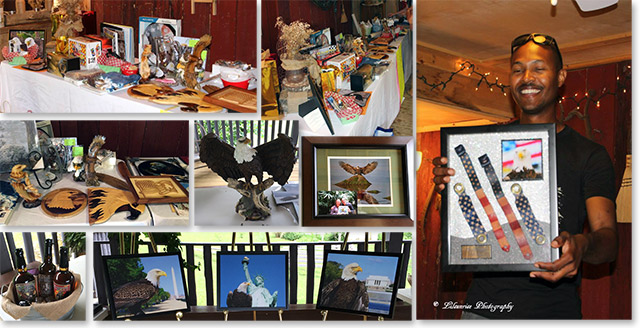 An amazing array of raffle and auction items – and a million thanks to every contributor!

The dinner/auction was sold out! Bidding was fast paced, and excitement was high!

The recipient for the high bid for Jack Turner’s beautiful painting of ‘Tatine’s Tree’ was Gretchen Butler
– gifted to her by Mohamad Jaddawi on behalf of the Chatters; John Prickett donated a fantastic collage featuring his photos of Lady Independence’s nest, which also generated funds for AEF.

Marcia Fairchild, Susan Rintz, and Nancy Bond: Winners of the photo-shoot with Al and Challenger. 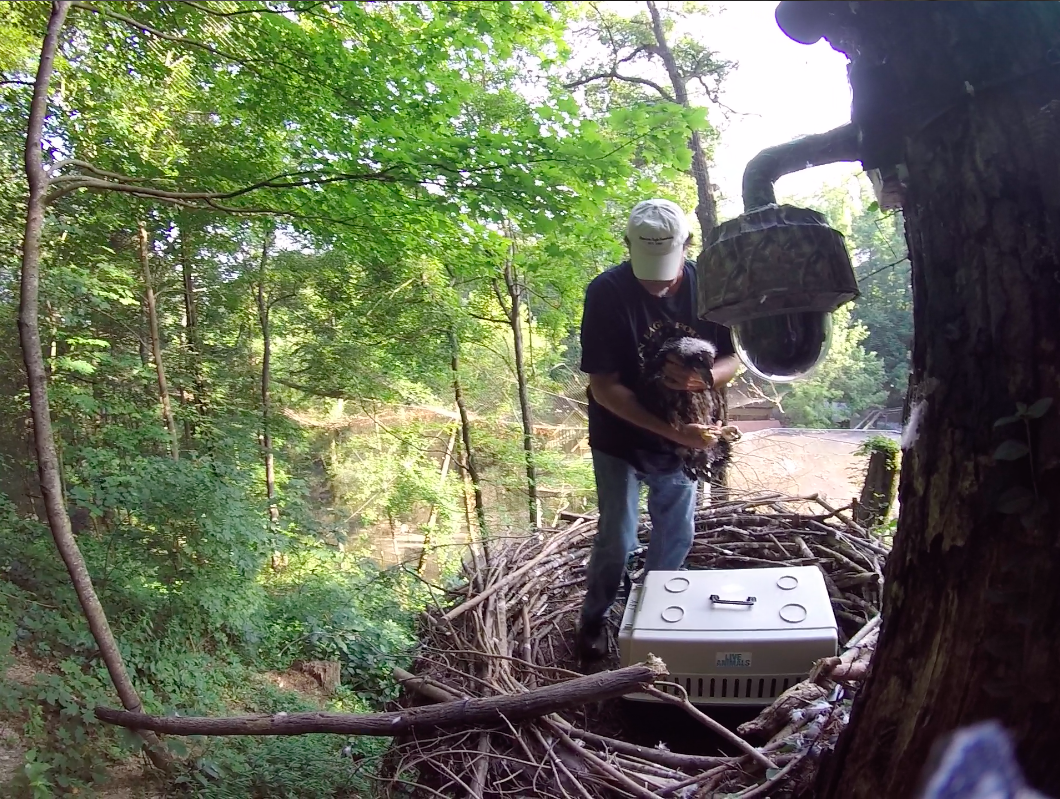 Graduation day came for ‘Little E’ as he transitioned to the Hack Tower. Assisting in the retrieval, weighing, banding, preparing his first meal at the hack tower, and finally placing him safely in his spacious new compartment were the winners of this special auction item: Ginny Cataldo, Linda Koen, Lois Zillmer, and Joni Henderson.

On Friday, June 19, an invitation was extended to Chatters to visit the Hack Tower on Douglas Lake. Many chatters participated in this adventure, especially those who had not been to the Hack Tower before.

At lunch, everyone gathered at Angelo’s for lunch under the pavilion. Appreciation gifts were presented  to Mods and Zoomers, contributed by Mohamed Jaddawi from Abu Dhabi, on behalf of the Chatters. 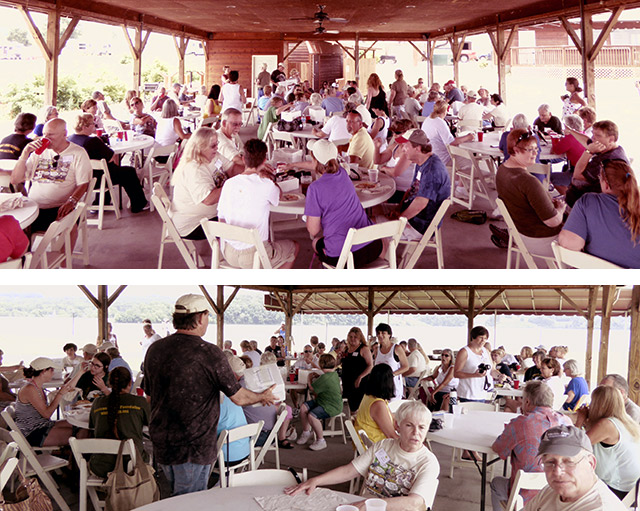 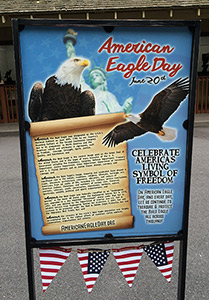 This was the culmination of a wonderful weekend.  We gathered at Eagle Mountain at Dollywood at 10:00 a.m. to begin the day’s festivities.
Special events and presentations included:
Wings Over American Birds of Prey show – featuring many stars (both human and feathered) from the AEF.
A presentation by Al Cecere
Songs by recording artist and composer James Rogers, Julia Cecere, Christian Knatt, & Mike Acuff
A presentation by Jody Millar, Eagle Grant Coordinator at the American Eagle Foundation, and Fish and Wildlife Biologist for the US Fish and Wildlife Service. For the last 20 years, Jody has been the Bald Eagle recovery coordinator in the United States for the USF&W Service.
Activities for children and adults (such as helping to construct an eagle nest), as well as the normal Dollywood park rides and entertainment.
An opportunity was given for individuals or groups to have their photos made with Al and Challenger, and an estimate of 270 photos were taken. What perseverance! 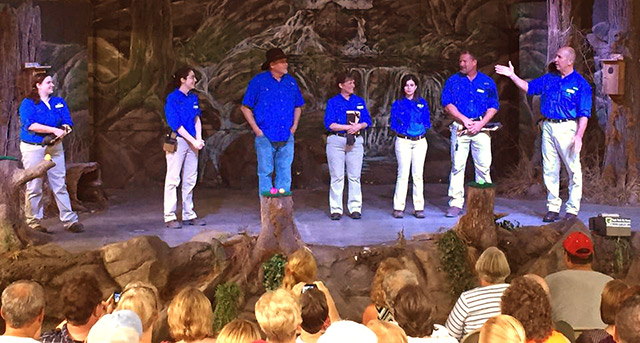 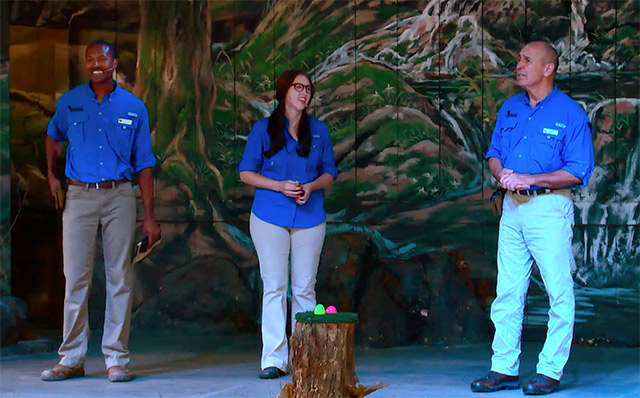 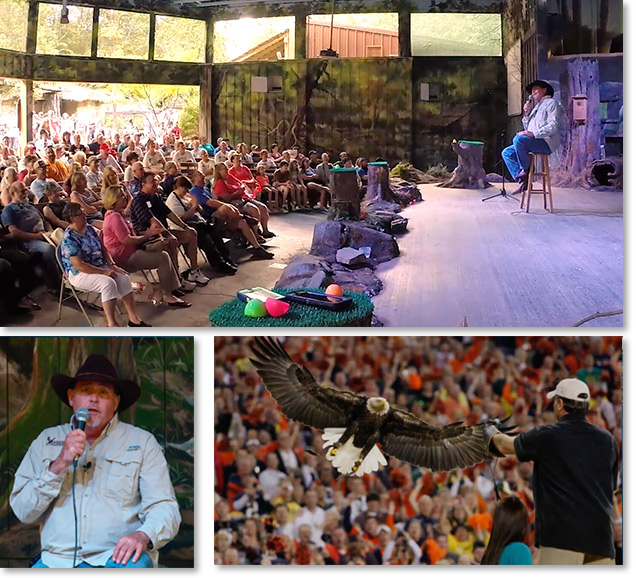 Al mesmerized the Chatters with tales about his adventures with Challenger. Al acknowledged Bob Hatcher’s role in the American Eagle Foundation in a moving tribute. 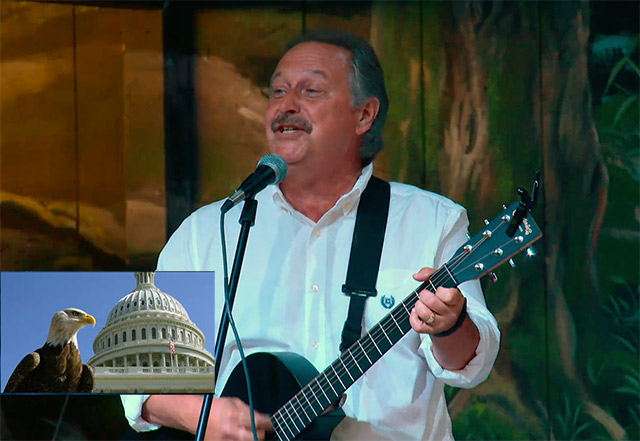 James Rogers performed his signature eagle songs, which have become so beloved to millions of listeners. James was also very important in connecting Al Cecere with the management at Dollywood—and therefore finding a permanent home for the AEF. When Challenger Flies—accompanied by a moving video tribute brought the audience to its feet! 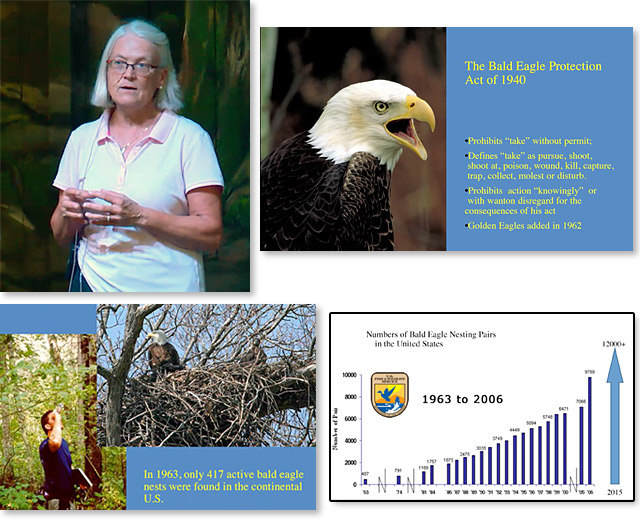 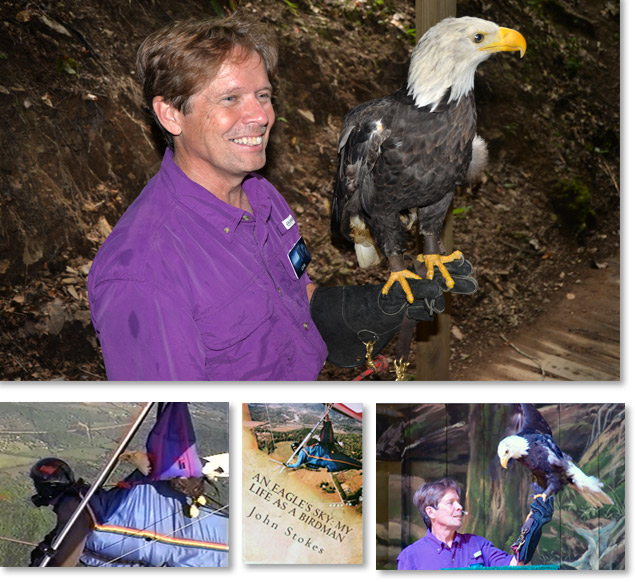 John Stokes presented ‘An Eagle’s Sky: My Life as a Birdman – How I Helped a One-winged Eagle Fly Again.’ An amazing journey was brought to life through video, slides, and an appearance by Osceola himself! 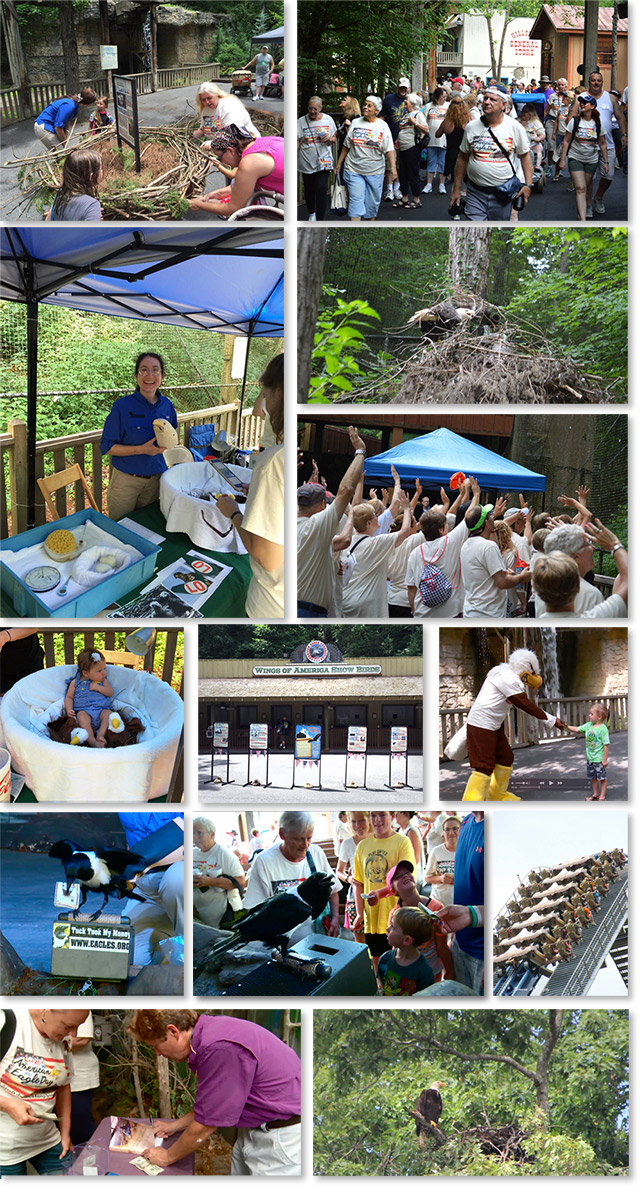 Side trips were made to the nest of Lady Independence, and her mate, Sir Hatcher. Just as a reminder, Lady was hatched in the nest of AEF non-releasable eagles Independence and Franklin a few years ago, banded and released, and then came back with her mate to ‘AEF Land’ to build a nest and raise eaglets of their own. Three healthy eaglets fledged from their nest this year.

All-in-all, a wonderful fun-filled event. It’s barely over, and we’re all looking forward to next year!

Starkey Gala – So the World May Hear
Scroll to top