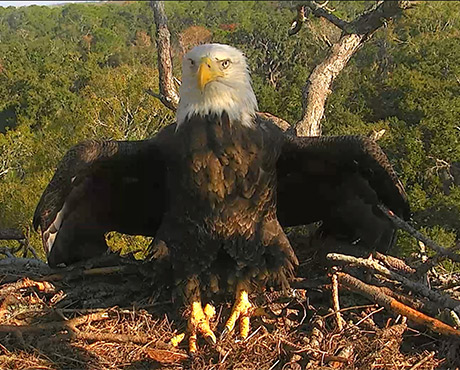 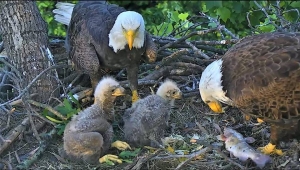 Eagle cams are a popular way of viewing wildlife, with their easy accessibility meaning that anyone with an internet connection can get a live, up-close views of eagles. What are some of the best eagle cams available on the internet? Some of the following eagle cams are provided by the American Eagle Foundation, while others are maintained by various other wildlife services. Notable eagle cams online include:

Before diving into the different eagle cams themselves, let’s go over some facts about the eagles that can be seen on these eagle cams. 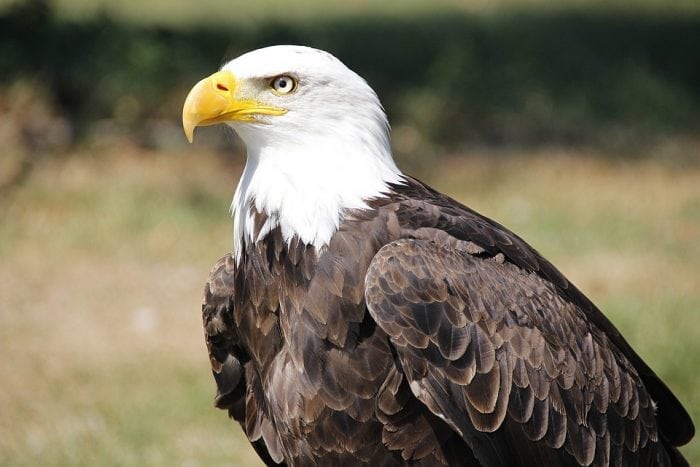 Bald eagles are birds of prey found in regions across the North American continent. The bird has been the mascot and emblem of the United States since 1782. The bald eagle is referred to as “bald” because of its white head feathers, which contrast with the dark brown feathers of its body and make the bird look bald at a first glance. Bald eagles are found only throughout the North American continent, but they can live in a variety of different biomes, being able to nest near coasts, marshes, lakes, rivers, forests, deserts, and reservoirs.

Bald eagles typically weigh in at around 3 to 6.5 kilograms or 6.5 to 14 pounds. They have a body size of between 86 centimeters to 109 centimeters, or approximately 34 inches to 43 inches in size. Their wingspan is much larger than their body size, approaching 2.15 meters or 7 feet in length. 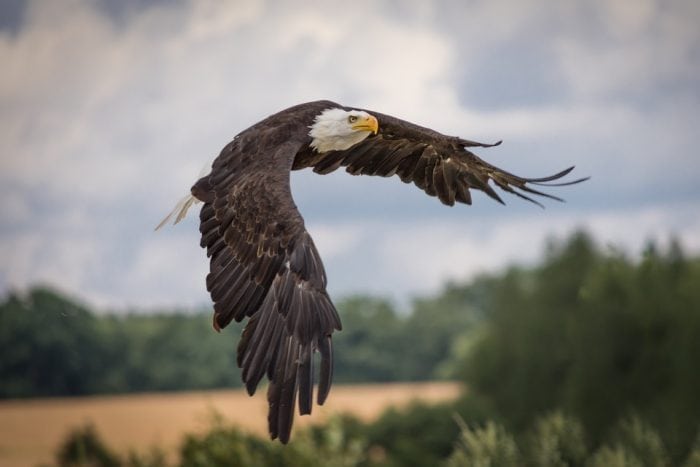 Bald eagles get much of their sustenance from fish, which gives them notoriety as “fish eagles”. Though fish make up much/most of their diet, the birds are opportunistic predators that will eat many other creatures like amphibians, reptiles, mice, rabbits, the eggs of other birds, and even smaller birds.

In terms of mating habits, bald eagles are suspected to be monogamous in nature, so once they find a mate they will stay with that mate for the rest of their lives, only taking another mate if their current mate dies. Bald eagles create nests to hold eggs made out of grass, feathers, large and small sticks, cornstalks, and moss. After bald eagles breed with one another the female of the species will lay between one to three eggs and incubate these eggs over a 34 to 36-day long period. After the baby birds hatch, they will stay in the nest and be cared for by the parents until they are able to fledge (flying from the nest) around 10 to 12 weeks of age. 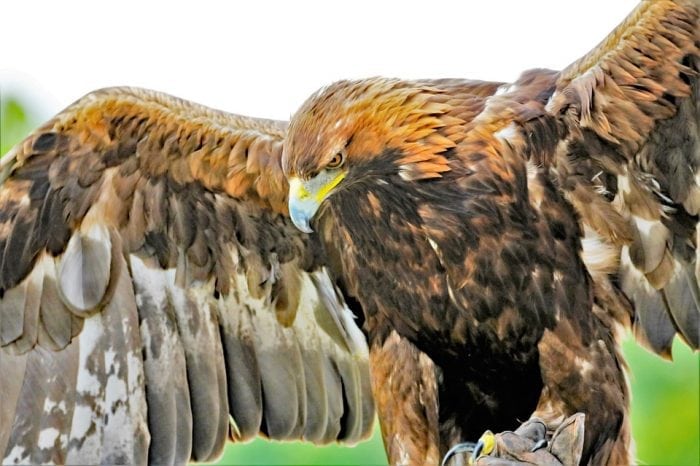 Golden eagles are the other main species of eagle found in North America. The birds can be found in Mexico and throughout the US and Canada, being found as far north as Alaska. Golden eagles can also be found in northern Africa, Europe, and parts of Asia. While some populations of golden eagles will migrate, others won’t. The migratory patterns of golden eagles depend upon the climate conditions of their home region. Birds that live in colder, more northern latitudes like Canada often fly south during the autumn months, yet the golden eagles that inhabit the western US tend to remain in their home ranges all the time.

Like bald eagles, golden eagles are thought to be monogamous and mate for life. A pair of eagles can maintain a territory that could be as wide as 60 miles, and they typically nest in high areas like cliff-sides or tall trees. A female golden eagle usually lays between one to four eggs, and both parents will take turns incubating the eggs for between 40 t0 45 days until the eggs hatch. Approximately twelve weeks after hatching the young eagles are capable of fledging.

Now that we’ve gone over some of the facts relevant to the eagles found on various eagle cams in North America, let’s take a look at some of the cams themselves and see what kind/how many eagles they focus on. 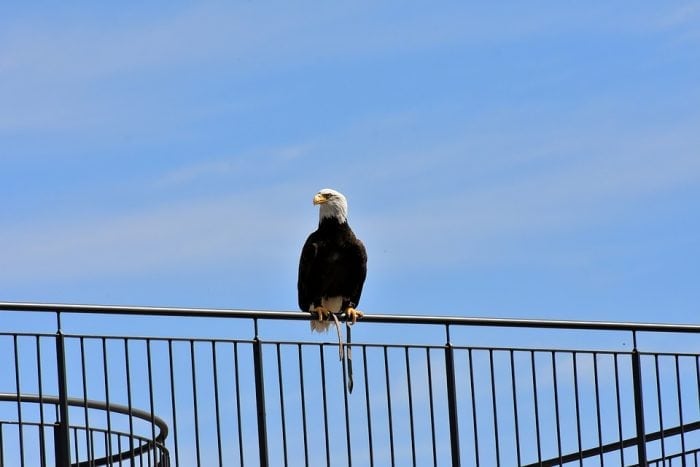 The Northeast Florida Nest Cam is one of the most famous eagle cams out there, watching the nest of a mating pair known as Romeo and Juliet. There are two cams that track the nest which provide hi-def, closeup views of the events in the nesting season. Another camera is placed farther away from the nest, which allows people to see the adult eagles fly into the nest and see the juveniles fledge.

The DC Eagle cam is arguably the most well-known cam, which features a mating pair dubbed Mr. President and First Lady. The bald eagle pair are found in the city of Washington DC itself, in a nest made at the top of a poplar tree located within the US National Arboretum. There are three cams that enable people to view the eagles in their nest from different angles, and the cameras are powered by solar energy.

The Dollywood Nest Cam is based out of the Eagle Mountain Sanctuary at the Dollywood theme park. There are two different pairs of eagles: Glenda and Grant, as well as Isaiah and Mrs. Jefferson. These two pairs of eagles are non-releasable bald eagles who can’t survive in the wild, but live their lives in the best approximation of nature that can be provided to them.

The Smoky Mountain Eagle Cam focuses on a pair of eagles known as Sir Hatcher II and Lady Independence. The Sir Hatcher II was originally released from a hack tower near Douglas Lake in 2012 after he didn’t fledge from the wild nest, while Lady was hatched from the nest of Franklin and Independence in 2008.

The Berry College eagle cams have IR (infrared) devices that allow viewing of the eagles even at night. There are two different nest cams and an approach cam that visitors to the site can look at. Special events and interviews with eagle experts are archived on the site.

(note by the American Eagle Foundation) ….. The AEF recently found out that the cam and website for Golden Eagles only operate when the eagles are present.  This project is funded by the East Cascades Audubon Society. Look for the website / cam going live around April each year.